Manston migrant centre is now EMPTY just weeks after it was fit to burst with 4,000 people 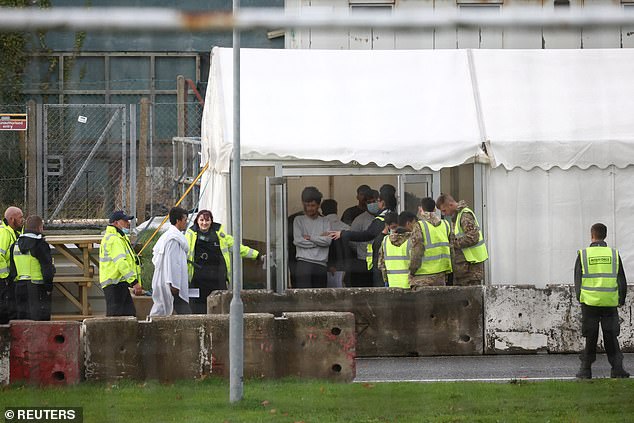 
Manston migrant centre is now EMPTY with Channel arrivals now in hotels and other accommodation just weeks after it was fit to burst with 4,000 people crammed into space designed for 1,600

A migrant centre that was crammed with more than twice the number of Channel arrivals it was designed to process is now completely empty.

Manston in northern Kent is designed to hold 1,600 but earlier this month was holding around 4,000 as officials struggled to cope with record numbers of arrivals.

But it is understood that the centre, which has seen outbreaks of diseases including diphtheria as people were held for days in a site designed to process them in hours, is now deserted.

All those in it have been moved to hotels and other accommodation, following a week in which no boat arrivals were recorded off the south coast.

It comes days after a migrant who had been taken to the centre died in hospital.

All those in it have been moved to hotels and other accommodation, following a week in which no boat arrivals were recorded off the south coast.

The Prime Minister’s official spokesman told reporters today: ‘Manston by design is meant to be a temporary holding facility where people are processed before moving on – normally fairly quickly.

‘There were immediate challenges particularly after the attack at the other centre which caused numbers to spike so you would expect numbers to be relatively low on a daily basis a people are moved through quickly.’

Yesterday Immigration Minister Robert Jenrick said the number of migrants at Manston stood at 300, following a high of more than 4,000.

The small boats crisis has dominated headlines over the past few weeks, with ministers under fire for overcrowding chaos at the holding centre in Kent.

Asylum seekers are meant to be at the site for only short periods of time while undergoing security and identity checks.

Some people have been held for longer stretches due to a lack of alternative accommodation, with concerns raised over poor conditions.

The man who died on Saturday is said to have arrived in the UK on November 12 and was taken straight to hospital.

But he was later discharged and taken to Manston, before becoming ill on Friday.

A Home Office spokesperson said there was ‘no evidence at this stage to suggest that this tragic death was caused by an infectious disease’.

They added: ‘We take the safety and welfare of those in our care extremely seriously and provide 24/7 health facilities with trained medical staff at Manston.’

The news follows weeks of controversies around conditions at immigration centres in the UK, especially at Manston.

The immigration centre, designed to be stayed at for no more than 48 hours, is currently home to many vulnerable asylum seekers fleeing war or persecution, including women and children.

New figures obtained by the charity Refugee Council showed the scale of a huge backlog in asylum applications, including 155 children who have been waiting for an initial decision on their case for more than five years.