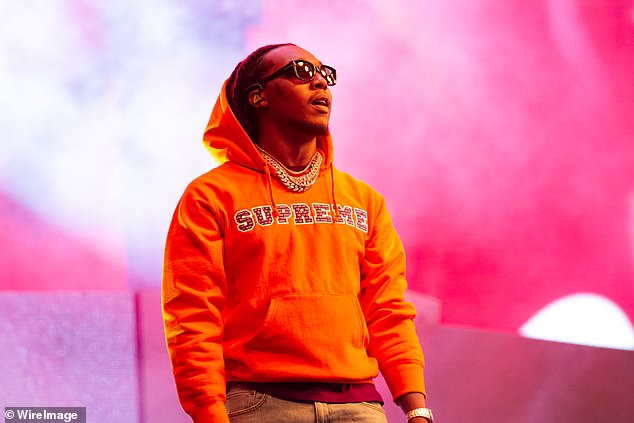 
A 33-year-old man has been arrested for murder after rapper Takeoff was shot dead.

Patrick Clark, 33, was arrested by Houston Police on Friday and charged over the rapper’s murder on November 1 at a private party outside 810 Billiards & Bowling Houston in Texas.

Takeoff, 28, was shot in the head and torso, according to a coroner’s report, and he was pronounced dead at the scene in the early hours of the morning.

Houston Police Department Sgt. Michael Burrow said: ‘We were able to deduce that Patrick Clark is the lethal shooter in the case, and that’s why he’s being charged with murder.’

‘He was not armed, he was an innocent bystander.’

Rapper Takeoff of Migos performs at Rolling Loud festival at Oakland-Alameda County Coliseum on September 29, 2019 in Oakland, California. He was shot dead outside a bowling alley in Texas on November 1

Patrick Clark, 33, charged with the murder of Kirshnik Khari Ball, known as Takeoff

Takeoff arrives at the ESPY Awards in Los Angeles on July 10, 2019

Two other people were injured in the shooting at the bowling alley.

Horrifying footage from the night showed the desperate last moments that Migos rapper Quavo desperately tried to help save his nephew when gunfire erupted.

Takeoff, born Kirsnick Khari Ball, was a member of the hip-hop trio Migos.

Friends and fans slammed the ‘senseless violence’ of the killing, with tributes to the rapper pouring in.

Thousands gathered outside State Farm Arena to mourn the 28-year-old’s life at his funeral, and Quavo, 31, shared an emotional post, detailing their relationship alongside a slew of childhood photos, with his 22.4 million Instagram followers.

‘It’s so hard to tell you Ima miss you because you always with me and we did everything together. Since we were kids you been by my side lookin up at me, them eyes waiting on me to make the next move.. then you followed up right behind me,’ he wrote.

The performer continued: ‘You always made sure I did it first so you can do it right with me. You never competed with me, we were always on the same team.’

Quavo, bandmate and uncle of Takeoff, looked distraught as he knelt over his nephew moments after the shooting

Quavo also marveled at Takeoff’s ability to be ‘quietest in the room but paid attention to everything going on in the room.’

‘Nothing ever really bothered Take and he didn’t bother anybody. He the most unbothered person in the the world. He never got mad, he never raised his voice, and when he did, he silenced the room because what Take said was law,’ the singer stated.

Quavo also called Takeoff the ‘funniest person in the room’ and mused that ‘once you got him goin he wouldn’t stop.’

‘Growing up he knew every song off the Hot Boyz album, every lyric word for word and he was cursing up a storm,’ he recalled, before noting they won a Boys and Girls Club talent show together performing ‘Get Ya Roll On’ by Big Timers.

‘So it’s safe to say we had something going then. It came easy to us when it came to style and swag…Then he created this triplet flow and the rest was HISTORY,’ Quavo said. ‘He never worried about titles, credit, or what man got the most shine, that wasn’t him. He didn’t care about none of that as along we brought it back to the family!’

Yakiboy, the bodybuilding influencer who boasts about his ‘Lamborghini body’, is behind bars and under…