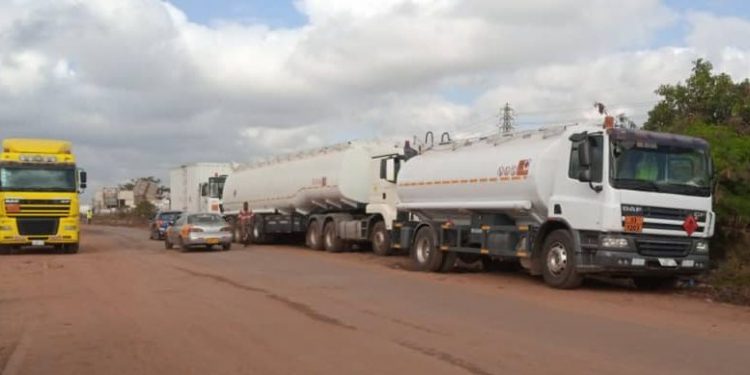 
The Liquefied Petroleum Gas (LPG) tanker drivers and allied bodies have called off their industrial action today after reaching an agreement with the government over their concerns.

The strike which began on Monday saw drivers who transport mainly LPG abandoning their trucks in protest of their treatment by the Bulk Oil Storage and Transportation Company Limited and the National Petroleum Authority.

The drivers also raised concerns about the seals and tracking devices that check the integrity of the fuel in the transportation process and the continuous ban on LPG Stations under construction since 2017.

Some LPG marketing companies also shut down their stations in solidarity.

The tanker driver unions in a statement said the agreement was reached after a meeting with the National Petroleum Authority (NPA) and the Ministry of Energy, following Cabinet’s decision to lift the ban on the construction of stranded LPG filling stations.

The LPG marketers and Operators subsequently ended their strike on Thursday but the tanker drivers refused to do so.

They however had a change of heart after a meeting with government on Friday.

The unions indicated their resolve to take immediate steps to resolve the operational challenges with the Electronic Cargo Tracking System (ECTS).

“A meeting is scheduled to take place on Monday, August 8, 2022, between the Service Provider, NPA, and our associations. We wish to thank the good people of Ghana for understanding,” the unions indicated in a statement.

The government, after the Atomic Gas explosion in 2017, placed a ban on new LPG retail points to allow for proper assessment of all LPG outlets nationwide.

LPG marketers subsequently petitioned the government and the National Petroleum Authority over the issue.

The President, Nana Addo Dankwa Akufo-Addo, shortly after the Atomic Junction Gas explosion in 2017, directed the implementation of the Cylinder Recirculation Module.

This meant that gas cylinders will no longer be filled up at gas retail outlets, but cylinders would be bought from distributors already filled when they go empty.

Apart from concerns over the loss of jobs, the Ghana LPG Operators Association has constantly complained that proper stakeholder consultations were not carried out as they were not engaged in the policy.