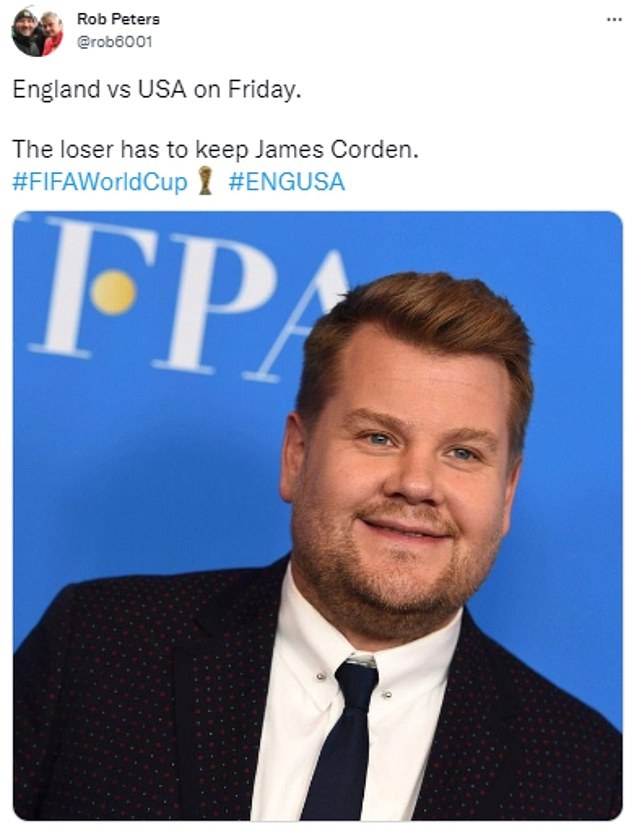 
‘Loser keeps James Corden’: England taunts America ahead of World Cup clash tonight – but US football fans hit back the game should be renamed SOCCER if they win

By Rory Tingle For Mailonline

With both sides still battling to make the knockout stages, there’s plenty at stake in football terms for England’s clash against the USA tonight.

But social media users believe it’s also the perfect chance to solve two hot button issues: which country gets to keep James Corden – and whether the beautiful game should be known as football or (whisper it…) soccer.

‘England vs USA – loser gets to keep James Corden,’ one Twitter user joked.

‘The whole world will eventually call it soccer after tonight’s USA win against England,’ wrote a cheeky American fan.

‘The whole world will eventually call it soccer after tonight’s USA win against England,’ another cheeky American fan added

England is in strong form and will only need a win out of Group B’s remaining two rounds of fixtures to progress to the tournament’s knockout stages, following its 6-2 drubbing of Iran.

The US, meanwhile, is still in search of its first victory in Qatar after conceding a late penalty to Wales in a 1-1 draw, Monday. Wales went on to lose 2-0 to Iran today.

References to the War of Independence featured heavily in today’s back and forth – with some Brits sharing photos of the White House being burnt down by British troops, and Americans hitting back with scenes of famous victories.

In October, the Brit was banned from one of NYC’s most popular restaurants – Balthazar – after he berated and yelled at servers over getting an omelette order wrong.

Along with his wife, Julia Carey, the couple complained to the server that there was ‘a little bit of egg white mixed with the egg yolk’ and sent the dish back.

Restaurant owner, Keith McNally added: ‘The kitchen remade the dish but unfortunately sent it with home fries instead of salad.

In response, McNally claimed Corden was the ‘most abusive customer ever’, adding that the Brit had previously behaved similarly at another restaurant that he used to own – Cafe Luxembourg.

England were given a boost by news team stalwarts Harry Kane and Harry Maguire are fit and raring to go for tonight’s clash at the Al Bayt Stadium.

England is in strong form and will only need a win out of Group B’s remaining two rounds of fixtures to progress to the tournament’s knockout stages, following its 6-2 drubbing of Iran

Three Lions captain Kane went for a scan after taking a blow to the bottom of his ankle against Iran on Monday – but was cleared to resume training on Wednesday.

But former England legend Wayne Rooney has warned against any complacency – predicting that the US have a chance to shock their transatlantic cousins after seeing how both teams played in the World Cup’s opening games.

‘In the first half against Wales, USA were excellent. They moved the ball quickly, they were aggressive and had a lot of energy in their game,’ Rooney wrote in The Times of the USA’s game against Wales.

‘I think here the Americans’ approach will be similar.’