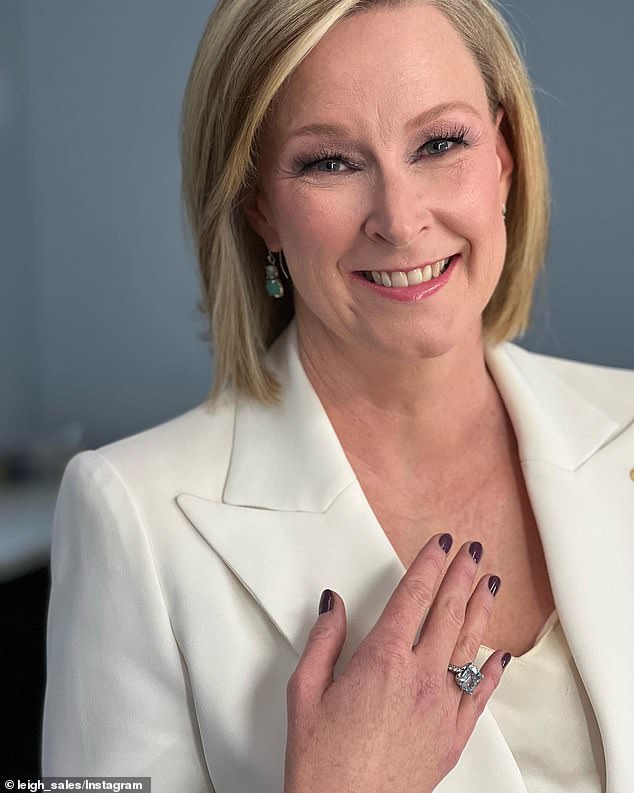 Leigh Sales has shut down conspiracy theories suggesting she was supporting Teal independents based on her outfit while covering the election.

The 7.30 host donned a white suit, paired with an aquamarine ring and teal earrings, while co-hosting Saturday’s election coverage on the ABC.

Her sartorial choices prompted many on social media to question if there was a hidden meaning behind her choice of jewellery.

Sales took to Instagram on Wednesday morning to ‘debunk the myths’.

‘I’ve seen a few conspiracy theories flying around about my election night wardrobe being chosen to send hidden messages,’ she wrote.

She said her make up artist and her had chosen the white suit, the same colour she has worn for the past three elections, because it ‘still looks fresh six hours on and when I’m exhausted it bounces a bit of extra light into my face to help mask it’.

‘The aquamarine ring belongs to one of my dearest friends, legendary AFR journalist Pamela Williams, who had it made years ago,’ she continued.

‘I have envied it forever and Pam lent it to me for the night because she knows how much I love it and for luck! The earrings were chosen to match the ring, not to send a message of teal support.

‘So I’m sorry to debunk the wild theories, but even sorrier that this ring is going home to Pam this week!!’.

Twitter users had questioned if there was a ‘story’ behind some of the outfits reporters were wearing to cover the election.

‘But what’s the story on Election night outfits on ABC: Laura Tingle in Liberal blue, Annabelle Crabb in Labor red with teal spectacles, Leigh Sales in neutral white with teal earrings! Hmmm the women were having fun,’ one tweeted.

‘Is Leigh Sales wearing teal coloured earrings, and Annabel Crabb with teal tinged frames on her glasses, or am I just tired?’ said another.

‘Leigh Sales wearing teal earrings … a clever nod to what may unfold tonight!’ one tweet read.