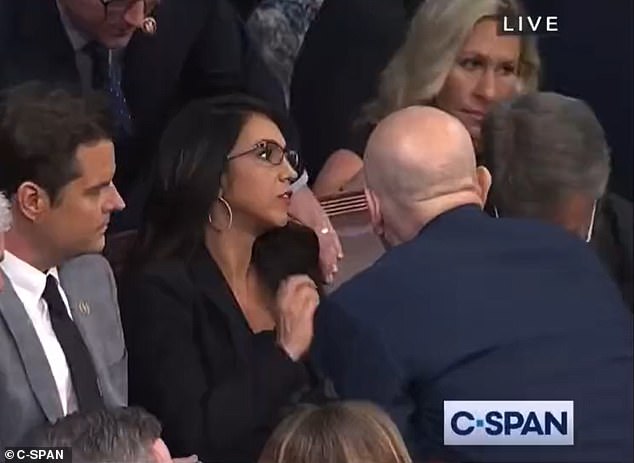 
US. Rep. Lauren Boebert was accused of telling fellow congresswoman Marjorie Taylor Greene to ‘Get the f**k out of my face’ during the House Speaker vote.

Amid a series of contentious votinging sessions that saw Kevin McCarthy fail 14 times to become Speaker of the House before succeeding, the GOP congresswomen were caught confronting each other when Boebert was one of the holdout votes.

Cameras caught the moment Greene, a staunch supporter of McCarthy, rolled her eyes and tapped Boebert on the shoulder, telling her, ‘You need to stop.’

Boebert is seen giving only a prompt response before staring straight ahead, with viewers suggesting that she had cursed out her fellow member of the Freedom Caucus.

It was just one of Friday night’s heated moments in the final day of voting, which was followed by Rep. Mike Rogers of Alabama charging at Rep. Matt Gaetz, who McCarthry pleaded with to stop delaying his certification.

As Greene tells Boebert to stop opposing Kevin McCarthy, the Colorado congresswoman gives a prompt response and ignores her colleague

The confrontation with Boebert was not the only time Greene butted heads with her fellow representatives during Friday night’s voting.

Greene also reportedly went up to Arizona Rep. Matt Rosendale and told him that Donald Trump was on the phone. A shot of Greene waving her phone showed she was on call with someone labeled ‘DT.’

Rosendale, one of the earlier holdouts, could be seen brushing her off.

According to Politico, a person familiar with the exchange said Trump told the group to ‘knock it off.’

Boebert wasn’t the only detractor Greene tried to confront on the final day of voting. She is pictured tried to get Arizona Rep. Matt Rosendale to take a call from Donald Trump

Following the exchange with Greene, Boebert and Gaetz left GOP heads frustrated when they voted against McCarthy, forcing him to call for the 15th and final vote.

It was around this time that Rogers lunged at Gaetz for delaying the certification yet again.

A visibly angry Rogers, one of McCarthy’s top backers, had to be restrained by Rep. Richard Hudson, of North Carolina.

It’s been reported that Rogers told Gaetz he is ‘finished’ for continuing to wreck the speaker’s vote and was also heard saying, ‘I won’t forget this.’

After pushing the night to its 15th voting session, US Rep. Mike Rogers appeared to charge at Gaetz, with congressman Richard Hudson holding him back (above)

Rogers is expected to be appointed as the chairman of the House Armed Services Committee, and multiple reports have suggested that Gaetz was holding out on supporting McCarthy until he was promised the role.

When asked about this, McCarthy told the media ‘no one gets promised anything.’ In the fallout, Greene, an ardent McCarthy supporter, told reporters: ‘There will be consequences’ for Rogers’ actions.

Greene added: ‘Mike Rogers lost his temper and was basically going to, you know, put his hands on Matt. And it was actually Richard Hudson — grabbed Mike Rogers from behind and pulled him away.’

She added, ‘So yeah, that was completely out of line. And then I’m sure it’ll be dealt with.’

While Rep. Patrick McHenry of North Carolina chimed in about the scuffle saying, ‘I’ve seen three or four moments like – that would even approach that in my 18 years, and that, that might have just taken the cake.’

Fellow Republican Congressman Tim Burchett, of Tennessee said, ‘I’m honestly – I’m not going to be threatened by anybody, and if somebody puts their hands on me, I will drop them like a bag of dirt,” Burchett told reporters early Saturday. “I really will, man. That is not – I am not one to back down from a fight.’