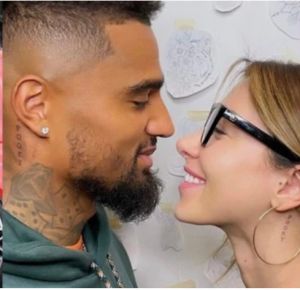 The 35-year-old player started dating Valentina near the end of 2021 and has since shown off their love consistently on social media.

Ghanaian footballer Kevin-Prince Boateng and his lovely girlfriend Valentina Fradegrada have a business together.

The pair, who are still going strong every day, have opened a winery that is receiving positive feedback.

The two, through the launch of a new page on Instagram, announced a new production of a wine label, a brand that already promises great success.
This comes after Hertha Berlin forward proposed to the stunning Italian model.

The couple started dating in July 2021 and have since formed a strong bond with reports indicating Valentina has already accepted the proposal of the Hertha Milan star to become his husband.

Boateng after separating from Melissa Satta has found new love with Valentina Fradegrada.

According to reports, the former Ghana international proposed to Valentina at a hotel party.

“We are telepathic”, they confessed to Vanity Fair.

Wedding preparations are already underway, with information on how the wedding will take place being revealed.

The couple will pledge their lifelong love even in the Metaverse, making them the first famous couple to do so in the virtual world.

In addition to the classic wedding rings and the exchanging of reciprocal promises, the couple will wear a special necklace around their neck as a present.

A pendant that is more valuable than the rings because it contains a drop of their blood: one next to the other, forever.