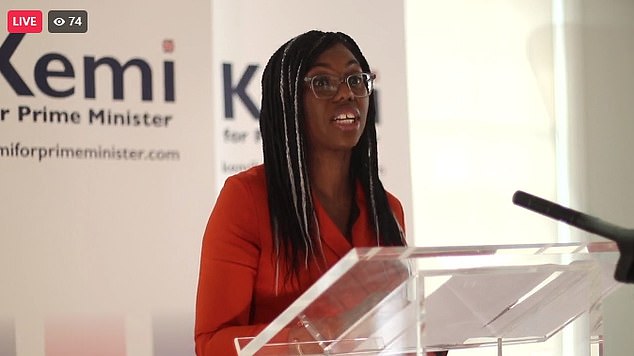 Tory leadership hopeful Kemi Badenoch lashed out at her rivals for making wild promises on tax cuts today, suggesting they were engaged in sad macho posturing.

The former equalities minister, who has emerged as a popular outsider in the contest to replace Boris Johnson, lashed out as she officially launched her campaign.

Many of her rivals have been criticised for making un-costed pledges to reduce personal and business taxes if they become Tory leader and prime minister.

Ms Badenoch, 42, said that she also wanted to lower the tax burden.

But in a blunt broadside at her rivals, more than half of whom are men, she added: ‘I will not enter into a tax bidding war and say my tax cuts are bigger than yours.

‘The dividing line in this race is not tax cuts, it’s judgment.’

But in a thinly-veiled jibe at favourite Rishi Sunak she also hit out at ‘steady as it goes’ government, vowing to make considerable changes.

The former equalities minister, who has emerged as a popular outsider in the contest to replace Boris Johnson, lashed out as she officially launched her campaign.

Ms Badenoch, a mother of three who was born in London to Nigerian parents, has yet to each the 20-backers threshold to take part in the leadership election proper. But she is only five short with a deadline set at 6pm.

Rishi Sunak underlined his status as Tory leadership front runner today as more Cabinet big beasts backed him – with Liz Truss begging the Tory right to unite behind her to take him on.

Would-be PMs have just hours left to rack up the 20 nominations needed to feature in the first round of the contest, with voting due to start tomorrow.

Mr Sunak already appears to be well over the threshold as he formally launched his campaign this morning, introduced by deputy PM Dominic Raab and Grant Shapps – who has abandoned his own leadership campaign.

The former Chancellor again batted away calls for tax cuts before inflation is under control, saying ‘we need to have a grown up conversation’. At the event in Westminster, he also heaped praise on Boris Johnson, describing him as ‘one of the most remarkable people I have ever met’ who has a ‘good heart’ – but it was ‘not working’ any more.

Mr Sunak – who only took a few questions from the media while journalists asking combative points were heckled by the crowd – said his plan was to ‘tackle inflation, grow the economy and cut taxes’. ‘I want to have a grown up conversation where I can tell you the truth,’ he said.

Mr Raab said before the speech: ‘We need a leader who can win… he is the only one who can win.’

Penny Mordaunt and Tom Tugendhat also seem to have reached nominations the mark, while Ms Truss is over the top after securing endorsements from Boris Johnson allies Jacob Rees-Mogg and Nadine Dorries – who declared their loyalty on the steps of Downing Street.

However, other big names are struggling, with Jeremy Hunt, Nadhim Zahawi and Priti Patel all short of declared backers.