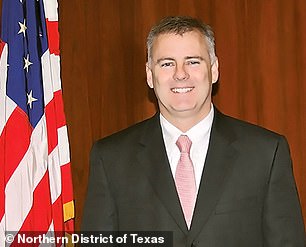 By Alastair Talbot For Dailymail.Com

Judge Reed O’Connor, the U.S. District Court Judge for the Northern District of Texas, ruled against the Biden administration’s vaccine requirement for active-duty members to vaccinate themselves against COVID in a lawsuit filed by 35 SEALS on Monday

A federal judge has granted a temporary injunction to 35 Navy SEALs who said they should be allowed a religious exemption to the US military’s COVID vaccine mandate.

Judge Reed O’Connor, the U.S. District Court Judge for the Northern District of Texas, granted a temporary injunction on Monday in response to a lawsuit filed by First Liberty Institute in November on behalf of 35 active-duty SEALs who are Christian and three reservists who are seeking exemption from the vaccine requirement for religious reasons.

The order prevents the Navy from setting new policies that would allow those who would object for religious reasons to be considered ‘non-deployable’ or ‘disqualified’ from Special Operations. It effectively means the Pentagon can’t fire those SEALs for refusing the shot.

‘The Navy servicemembers in this case seek to vindicate the very freedoms they have sacrificed so much to protect,’ O’Connor wrote in his order. ‘The COVID-19 pandemic provides the government no license to abrogate those freedoms. There is no COVID-19 exception to the First Amendment. There is no military exclusion from our Constitution.’

More than 99 percent of active-duty Navy service members are fully vaccinated against Covid-19, according to court documents related to the case. Pictured: A Navy commander receiving his second COVID-19 vaccine dose at Branch Health Clinic in Washington Navy Yard in D.C. in February.

Last year, the group of Navy Seals filed a lawsuit accusing the Navy of having ‘disdain for religious vaccine accommodations,’ in contrast to ‘certain secular vaccine exemptions’ — like privileges for medical reasons — that had been approved.

Those who challenged for religious reasons alleged, upon expressing their concerns to other officers, that they were warned that they could suffer serious repercussions for their refusal to follow the mandate, including being snubbed from consideration for Special Operations and deployment missions.

Some Christians have sought vaccine mandates because vaccines have been made with cells derived from aborted fetuses, although religious groups – including the staunchly pro-life Catholic Church, have insisted it is not sinful to receive a COVID vaccine, and has encouraged followers to have one.

More than 99 percent of active-duty Navy service members are fully vaccinated against Covid-19, according to court documents related to the case.

The lawsuit also cited that the Navy violated the group’s religious rights including the Free Exercise of Religion Clause of the Constitution and the Religious Freedom Restoration Act. The first law ensures protects citizens’ right to practice their religion as they please, so long as the practice does not run afoul of a ‘public morals’ or a compelling’ governmental interest, while the second is ‘ensures that interests in religious freedom are protected.’

In December, Sen. Ted Cruz (R-Texas) and other Republican members of Congress signed an amicus brief, backing the lawsuit.

‘Forcing a service member to choose between their faith and serving their country is abhorrent to the Constitution and America’s values,’ said Mike Berry, General Counsel for First Liberty Institute. ‘Punishing SEALs for simply asking for a religious accommodation is purely vindictive and punitive. We’re pleased that the court has acted to protect our brave warriors before more damage is done to our national security.’

In December, Republican Texas Sen. Ted Cruz (pictured) and other Republican members of Congress signed a legal brief in support of the lawsuit

O’Connor said that the plaintiffs were likely to succeed on their constitutional and RFRA claims.

Other vaccination rules set in place by the Department of Defense have also been earmarked by other lawsuits before Monday’s ruling. However, none of those cases had been granted preliminary orders, loosening the requirements.

The Biden administration’s vaccine policies for federal employees, and workers in health care and large companies are also being closely followed by the Supreme Court, which is considering to challenge them, but religious freedom is not considered as a central issue in either of those cases.

O’Connor’s order also comes as other U.S Marines face potential discharge or disqualifications for not being vaccinated after the Department of Defense’s mandate on Nov. 28 ordered all active-duty service members to seek vaccination.

As of December, the US has approximately 35,000 troops who remain unvaccinated, with 3,864 soldier refusals coming from the Army.  .

Share. Facebook Twitter Pinterest LinkedIn Tumblr Email
Previous ArticleChina, US, UK, France and Russia pledge to avoid nuclear war
Next Article My Influencing Pay for 3 months is what your favorites are signing for one year – BBNaija Star, Queen throws shades