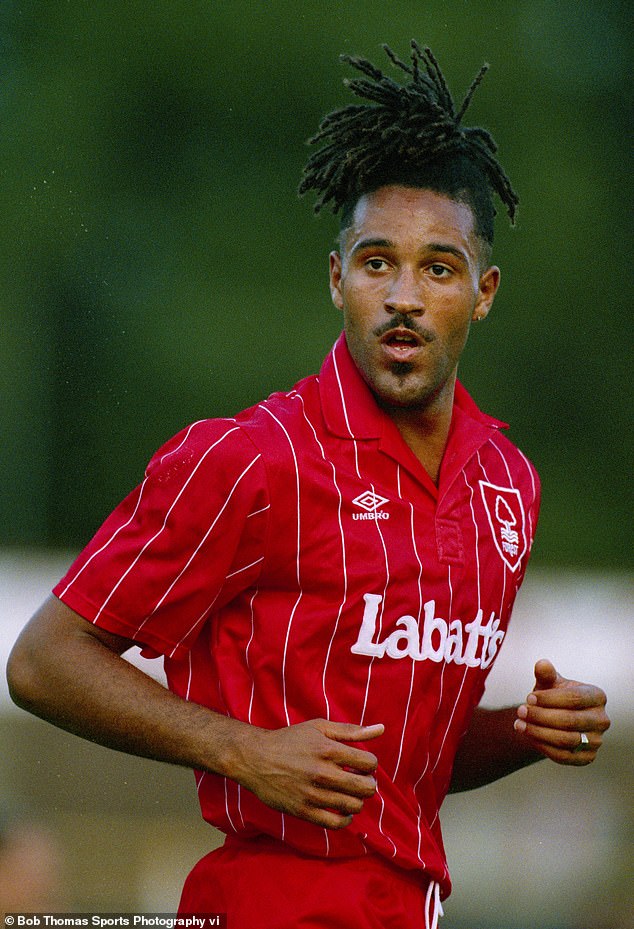 
Footballer Jason Lee has said that David Baddiel did not apologise to him ‘personally’ for doing blackface while impersonating him on his show Football Fantasy League until recently – 25 years after the series aired.

Former Nottingham Forest striker Lee, 51, said the sketches, which included Baddiel wearing blackface and a pineapple on his head, added a ‘whole new layer’ of racist abuse which he still receives now.

The BBC show saw Baddiel and co-host Frank Skinner mock footballers and managers, with Skinner admitting earlier this year that their repeated targeting of Lee amounted to ‘a bullying campaign’.

Writing on Twitter, Lee described the sketches as ‘racist, culturally offensive, and bullying,’ adding that Baddiel ‘rightfully accepts this now.’

But, he said, previous apologies were not sufficient. ‘I often see in the press and online “David’s apologised publicly, in writing & in interviews.” While that may be so, I don’t consider any of those previous instances an apology to me.

‘The apology came recently when David came to meet me personally and apologise directly.’

It comes after Lee and Baddiel shared a frosty encounter as part of the Jewish comedian’s new Channel 4 documentary, Jews Don’t Count, which explores antisemitism in society.

The full conversation is also set to feature on Lee’s new podcast, The AbsoluteLee Podcast, out tonight.

He went on: ‘While the conversation between David and myself was challenging for us both in different ways, I respect that David finally found the courage to come and speak to me after all these years.’

Baddiel retweeted the former football manager’s thread and signalled that it showed his agreement that he does now accept the sketches were racist.

Speaking in the Times today, Lee said: ‘Before Baddiel, I was receiving abuse for my skin colour or ‘You’re not good enough’. I was desensitised to most abuse.’

‘But the situation with Baddiel was a whole new layer of abuse. Baddiel Blacked up.’

Lee said that it was not just Baddiel at fault and that the BBC should have stepped in.

‘So many people were complicit. BBC2. It’s selling, it’s popular, we are all getting paid. It’s working. He wasn’t held to account,’ he said.

As well as wearing blackface, Baddiel would portray Lee as dim-witted and wear a pineapple on top of his head to imitate his hairstyle.

This led to football fans starting a chant ‘He’s got a pineapple on his head’, which Lee said meant he had to stop his family from attending matches.

The player said the abuse ‘traumatised’ his children, adding: ‘To be a parent and witness your son go through that, to go to a stadium and listen to people abuse your child must be difficult.’

Speaking on Good Morning Britain last week, Baddiel said: ‘I shamefully impersonated Jason Lee in Blackface 25 years ago on Fantasy Football, and I felt that it was important, if I’m going to do a documentary about Jewish representation and minorities, that I should go and meet Jason and apologise and talk to him,’ he said.

‘At the end of the conversation, he talked passionately about how he’d like to stand up for Jews and fight antisemitism in football.’

But Lee said that while the meeting was ‘long overdue’, he suspects the timing of it has something to do with Baddiel ‘being back in the public eye’.

‘I’ve never seen him before until he walked in,’ he said. ‘Timing is everything. He’s back in the public eye again… I understand fully he’s used this situation mostly to benefit the documentary. To move forward he needed to address this situation.

BBC show saw Baddiel and co-host Frank Skinner (centre) mock footballers and managers, but Skinner has since admitted their repeated targeting of Lee amounted to ‘a bullying campaign’

‘With Baddiel, I wasn’t happy you’re making me out to be a clown, you’re trying to demean what I’m doing, and I’m not going to let it happen… I’m not a clown. I was violated on so many levels in those sketches. I felt I should be getting royalties I was on that show so often.’

He continued: ‘They were basically saying I was s*** in the programme. Then Baddiel comes in and tries to spin it and say, ‘I knew you were a brilliant player, blah, blah, blah.’

‘He’s highly intelligent but how people process things in their mind is incredibly complex. He may not see the importance or relevance of blacking up but he would fully understand how it felt to be abused as a Jewish person. It’s now happening to him, the realisation: this is how I feel, that’s how Jason feels.’