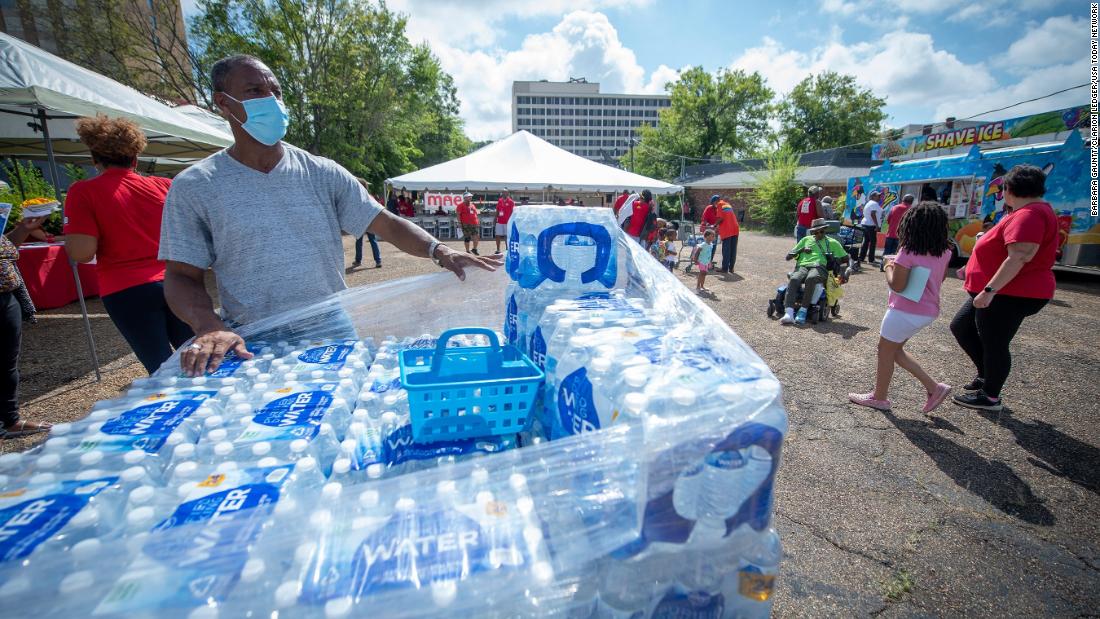 The governor said he will declare a state of emergency for the state’s largest city and state authorities are scrambling to begin distributing water to 180,000 residents.

The city’s troubled water system has been plagued with issues for years. In February 2021, a winter storm shut down Jackson’s entire water system, leaving tens of thousands of residents without water for a month amid the Covid-19 pandemic.
On Monday evening — as Jackson residents were dealing with record-setting rain that resulted in the Pearl River cresting at a dangerously high level — Reeves announced the city is failing to produce running water.

“It means we do not have reliable running water at scale. It means the city cannot produce enough water to fight fires, to reliably flush toilets and to meet other critical needs,” Reeves said.

As a result, officials announced all Jackson public schools will shift to virtual learning Tuesday.
The water pressure issue is on top of a boil water notice in place for the past month due to a water quality problem.

Authorities said the water is not safe to drink or use while brushing teeth.

“Please stay safe. Do not drink the water. In too many cases, it is raw water from the reservoir being pushed through the pipes,” Reeves told Jackson residents. “Be smart, protect yourself, protect your family.”

Residents are being told to conserve the water resources they do have and boil any water they use for three minutes.

The state is expected to call in the national guard to help distribute drinking and non-drinking water as crews work to get the water treatment plant back online, state officials said.

“Replacing our largest city’s infrastructure of running water with human distribution is a massively complicated logistical task,” Reeves said. “We need to provide it for up to 180,000 people for an unknown period of time.”

Besides preparing to distribute water to residents, the state is setting up a tanker system to provide water for fire trucks as Jackson loses the ability to take water from fire hydrants, officials said.

A system long plagued with issues

The problem stems from one of two water treatment facilities in the city, the O.B. Curtis plant, which is run by the city of Jackson, according to the governor. “O.B. Curtis is not operating anywhere near capacity. And we may find out tomorrow’s not operating at all,” Reeves said.

O.B. Curtis is meant to provide about 50 million gallons for the city daily. The other plant, which usually provides about 20 million gallons daily, has been approved to ramp up its output amid the shortage, authorities said.

The main pumps at O.B. Curtis were severely damaged and the facility began operating on smaller backup pumps about a month ago, around the same time a prolonged boil water notice began, the governor said.

The governor said he was told Friday that “it was a near certainty that Jackson would fail to produce running water sometime in the next several weeks or months if something did not materially improve,” the governor said.

Over the weekend, state officials started developing water distribution plans and “preparing for a scenario where Jackson would be without running water for an extended period.”

“All of this was with the prayer that we would have more time before their system ran to failure,” Reeves said. “Unfortunately, that failure appears to have begun today.”

The mayor of Jackson, Chokwe Antar Lumumba, declared a water system emergency Monday, saying recent flooding of the Pearl River was to blame for the latest water pressure issues.

“As one crisis may be diverted, another one rears its head,” Lumumba said during a news conference after addressing the flooding in the city.

The mayor said because O.B. Curtis received additional water from the reservoir during the flooding, the facility had to change the way it treats the water, which has led to the reduction of water being put out into the system and reduced tank levels. This is affecting the water pressure at residents’ homes, he said.

“It is no secret to any of us that we have a very fragile water treatment facility,” the mayor said, adding that the outage “could potentially last for a few days.”

Jackson has had ongoing challenges with its water system and some residents were already reporting low to no water pressure and raw sewage flowing in city streets and neighborhoods.
Lumumba previously told CNN a lack of political will and years of neglect on a national level has prevented Jackson from getting the help it needs to fix its water and sewer crisis.

Besides the infrastructure issues, the plant has also been faced with staffing issues, according to the mayor and governor.

“A far too small number of heroic frontline workers were trying their hardest to hold the system together, but that it was a near impossibility,” the governor said.