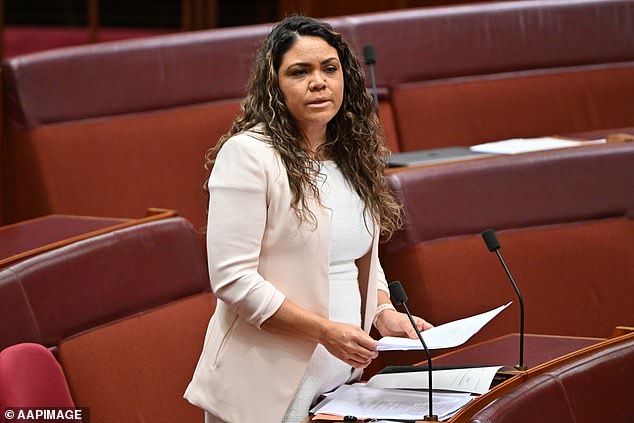 
Senator Jacinta Price has accused Anthony Albanese of regularly flying overseas to support ‘other nations in need’ but ignoring ‘the war zone in the heart’ within his own country as Alice Springs descends into lawlessness.

In a scathing open letter and social media post, the Northern Territory Senator called on the Prime Minister to reintroduce alcohol bans for Indigenous Territorians claiming Labor’s lifting of them had caused ‘absolute chaos’.

In a Facebook message the Country Liberal Party Senator said all that Territorians wanted was to ‘sleep safely in their bed’, as Mr Albanese ‘no doubt’ does.

‘And most of all we want the children on our streets to be living lives free of violence and sexual abuse.’

Senator Price accused the Prime Minister of saying he wanted to ‘listen to indigenous voices’ but ‘we are being completely ignored and left to suffer in alcohol-fuelled violence and abuse’.

Ms Price said Mr Albanese was not even listening to his ‘own female Aboriginal Member for Lingiari’.

Indigenous Labour MP Marion Scrymgour, who represents the NT seat in federal parliament, said on Monday the level the level of violence in her constituency was undermining the campaign to establish an Indigenous Voice to parliament.

‘I think the Voice couldn‘t be further from people’s view up here because people are under siege in their own home,’ she told Melbourne radio station 3AW on Monday.

‘So they’ve gone to the opposite thing of ‘well, why should we support the Voice if we can’t even get police to protect me while I’m sleeping in my own home?’.’

Wearing a football jumper as a mask, this young man tried to break in to Alice Springs’ oldest pub, the Todd Tavern, last weekend by doing a running jump at the metal shutter.

Senator Price claimed she had emailed the prime minister about the situation in her hometown of Alice Springs but had been told his inbox was full, so she had decided to tag him on social media instead.

In her letter addressed directly to Mr Albanese, Senator Price said she had been contacted by multiple businesses, organisations and people who had been victims of crime in the central Northern Territory.

Cars are regularly stolen, broken into and torched in Alice Springs, meaning residents cannot leave their vehicles unattended in the street

‘This situation has been getting worse over the past few months to the point that business owners and individuals are being forced to pack up and move away,’ Senator Price wrote.

‘The current dire state of affairs within the community of Alice Springs requires urgent action now!’ the letter says.

An Alice Springs man posted this video of the five children who broke into his Tennant Creek house, where they spent 30 minutes trashing the place before leaving

‘It is unacceptable that the Australian Government is quick to focus on providing assistance to citizens of a foreign nation on the other side of the world, yet continues to turn a blind eye to the suffering of our own people here at home.’

WHY THE KIDS ARE RUNNING WILD

Darren Clarke, who started the campaign to spotlight the violence in Alice Springs, told Daily Mail Australia that indigenous kids were coming into town and committing crimes and acts of violence to get away from alcohol-fuelled violence at home.

‘These kids are not in safe homes, there’s alcohol being drunk in the town camps, there’s blood on the walls at home, kids see people being hurt and the kids are being raped and abused.’

After accusing the NT government  failing to heed the ‘desperate’ cries of help from their citizens, Senator Price urged Mr Albanese to commit federal resources to remedy the situation.

It was announced on Tuesday that Mr Albanese is flying to Alice Springs in response to the chronic crime problem.

As many as 200 children roam the streets at night and business owners complain of being broken into dozens of times.

Northern Territory Chief Minister Natasha Fyles is also travelling there on Tuesday to discuss the crisis with locals.

Ms Fyles was also steadfast against a federal intervention similar to that instigated by John Howard in 2007, which included strict curbs on the sale of alcohol and the quarantining of welfare payments.

Opposition Leader Peter Dutton said Mr Albanese could have flown in with him on a bipartisan trip but had dragged his feet focusing on other issues.

‘(He) should have been there by now,’ Mr Dutton insisted on Monday.

Sydney radio 2GB talkback host Ben Fordham claimed Mr Albanese had ‘caved’ and ‘buckled to the pressure’ of numerous critics calling on him to intervene.

The soaring crime rate in Alice Springs has come into sharp focus with a campaign by local man Darren Clarke and his Action For Alice Facebook page.

In a 2GB video posted on his page, Mr Clarke begged PM Anthony Albanese to ‘get up here mate, it’s so bad, you do not know how bad this is’.

‘All the violence and abuse that happened to children in the Northern Territory on remote communities, in homes in this town, the violence on our streets.

‘It’s not a racial problem, it’s a behavioural problem. The whole town is suffering. It doesn’t matter what colour you are.’