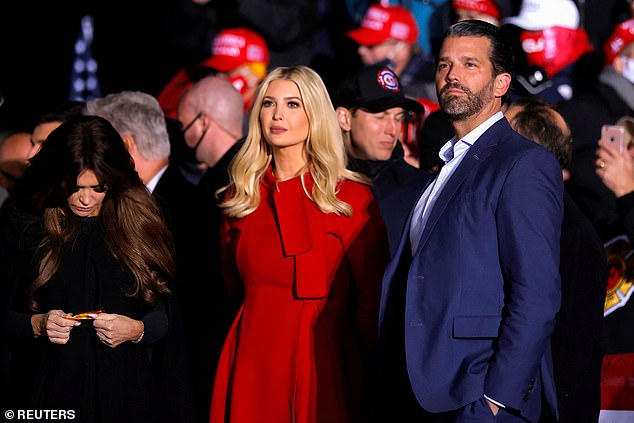 
Ivanka Trump and Don Jr. REFUSE to comply with subpoena from Democrat New York AG Tish James in her civil investigation into whether their father inflated his property prices

They were served on December 1, the same day as their father, the New York Times reported.

Their participation in the civil probe was revealed in a Monday court filing by Trump Organization lawyers looking to block the former president and his children from speaking with James’ investigators.

A joint court filing by James and an attorney for the ex-president’s family business sought to update Ivanka and Donald Jr.’s status in the ongoing probe to ‘respondents.’

The filing also indicates they could take their own legal actions to fight James’ subpoenas as soon as Monday, ABC reported.

Trump has frequently dismissed both probes as ‘witch hunts’ and accused Vance and James of political motivations and urged them to focus on rising crime rates in New York City.

His youngest adult child, Eric Trump, was questioned in October 2020.

For more than two years James has been looking into whether the Trump Organization committed fraud by misrepresenting the value of Trump’s real estate assets in statements to banks and tax authorities.

James said she was seeking a deposition from Trump as part of her civil probe, which began in March 2019 while he was still in the White House.

That investigation has already produced charges against the Trump Organization’s Chief Financial Officer Allen Weisselberg as well as the Trump Payroll Corporation.

Eric and Donald Jr. were handed control of the company when Trump took office along with Weisselberg.