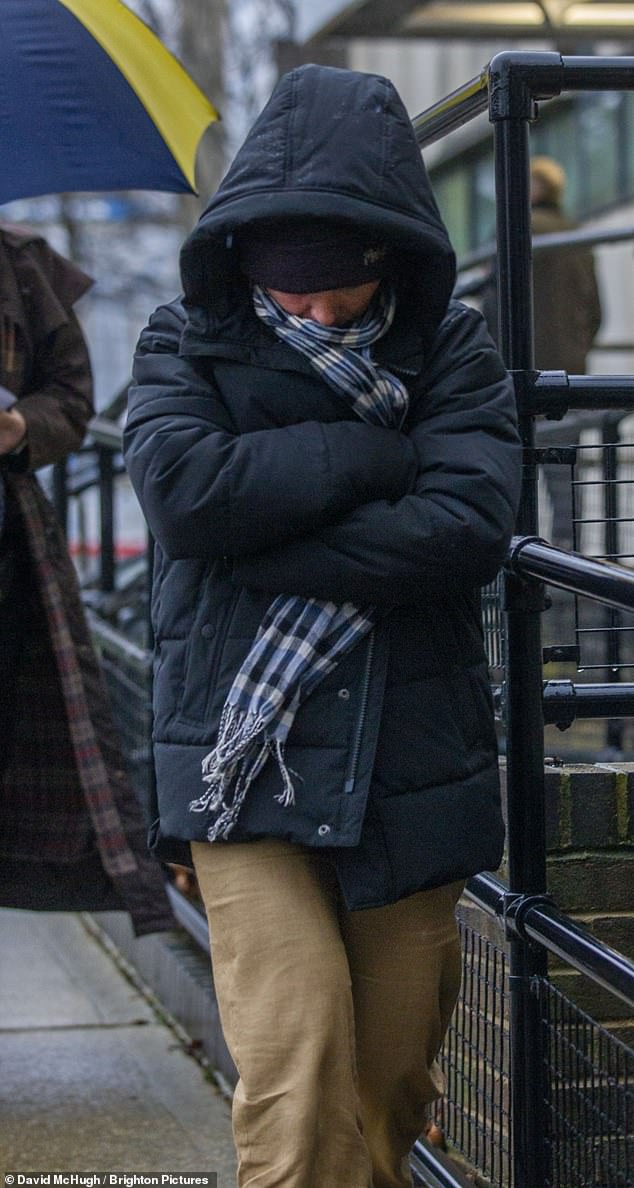 
Actress Honeysuckle Weeks was twice the legal drink drive limit when she climbed behind the wheel of her car in order to escape being coerced into sex, a court heard.

The troubled 43-year-old star of ITV‘s Foyle’s War had been out drinking with friends in West Sussex when she claimed she felt compelled to flee the scene over fears she would be coerced into group sex after being invited to stay over for the night.

Weeks left the house and, despite being drunk, got behind the wheel of her £30,000 silver Honda CR-V SUV before reversing into a parked car in sight of an off-duty police officer.

The actress – who has also appeared in the Midsomer Murders, Ruth Rendell Mysteries and Death in Paradise – appeared before Worthing Magistrates’ Court where she pleaded guilty to drink driving.

Weeks was banned from the road for 20 months and hit with a £120 fine and £85 in costs after admitting drink-driving.

Actress Honeysuckle Weeks (above) was twice the legal drink drive limit when she climbed behind the wheel of her car in order to escape being coerced into sex, a court heard

After deciding to leave the property in Arundel, Weeks reversed into a parked car on nearby Maltravers Street before driving off and then returning just 15 seconds later.

The incident was seen by an off-duty police officer who stopped the car and realised the driver was drunk.

After failing to carry out a roadside breath test Weeks was taken to a police station where a breathalyser test showed she was more than twice the legal drink drive limit.

The test showed she had 78 micrograms in 100 millilitres of breath – legal limit is 35 micrograms.

Weeks, of Byworth, West Sussex appeared before magistrates in Worthing today where she pleaded guilty to drink driving.

Mathew Howell, prosecuting, said: ‘On Monday November 28 last year at approximately 7.20pm the defendant was driving her vehicle in Arundel when she was seen to reverse into a parked car on the street.

‘The defendant drove off from the scene before returning 15 seconds later. The vehicle was stopped and the police officer realised the driver was drunk.’

Honeysuckle Weeks pictured left in May 2015, and right in October 2014

Wearing a tweed checked jacket, brown trousers, a grey polo neck jersey and brown boots, she told magistrates she only got into the car after she felt she as in danger of being coerced into sex with a man and his lover.

She said she had been out drinking with friends and had been invited to stay the night in Arundel.

Weeks said: ‘I was expecting to stay night in a friend’s house in Arundel but the man in question invited his lover to the property and I was in danger of being coerced into sexual actions with them which I found extremely unwelcome.’

She told magistrates she needed her car to take her son to school every day.

Weeks also told her she was not earning any money at present and was only receiving Universal Credit.

Magistrates banned her from driving for 20 months and fined her £120 with £85 costs and a victim surcharge of £48.

Weeks agreed to undertake a drink driving awareness course which would reduce her driving ban by 20 weeks, meaning she could get her licence back in April 2024.

Weeks told the court she was no longer living at the Chichester Centre in Chichester, West Sussex – a low security unit for treating people suffering from drug and alcohol problems.

In July 2016, Weeks disappeared during a stay as a voluntary patient at a care centre near her home in West Sussex.

Sussex Police issued an appeal saying they were searching for Weeks who disappeared after exhibiting ‘concerning behaviour’.

However, she was later found safe and well and remained with police before returning to West Sussex.

Her disappearance was not the first time the Oxford graduate has sparked concern for her wellbeing.

In 2015, Weeks was caught speeding with her five-year-old son Wade in the back when she was serving a driving ban.

Following sentencing she was made to wear an electronic tag and a nightly curfew was imposed for a month.

The actress once claimed she fed cannabis-laced mince pies to her unsuspecting parents and married hypnotherapist Lorne Stormonth-Darling in a Buddhist ceremony in the Himalayas in 2005.

However the couple reportedly had a turbulent marriage with neighbours describing the couple having ‘vicious’ rows outside their home in Kensal Green, London.

Weeks reportedly split from her husband in 2019 and tweeted a picture of a sign bearing the initials L&H with pink hearts burning on a bonfire, captioning it ‘By bye marriage’.

Weeks made no comment about her most recent case as she left court today.

Share. Facebook Twitter Pinterest LinkedIn Tumblr Email
Previous ArticleFrom feminist pioneers to putting pros, the historic journey of the St. Andrews Ladies Putting Club
Next Article Man gives unexpected response to lady who publicly shoot her shot at him after spotting him on a power bike