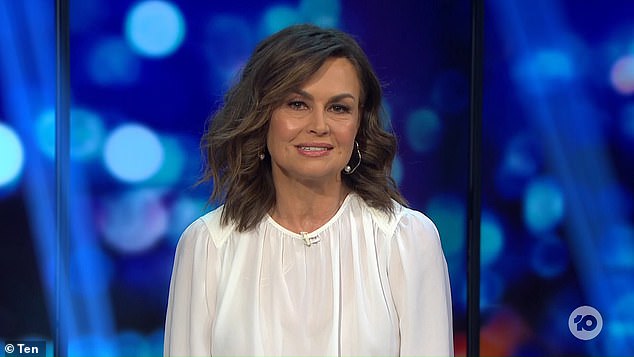 
Lisa Wilkinson blamed a ‘toxic’ and difficult six months as part of the reason for her shock departure from The Project.

The tumultuous time saw the TV presenter inadvertently delay one of Australia’s biggest rape trials at a time when she was still dealing with the backlash from colleagues and the public over her bombshell tell-all memoir.

Wilkinson told viewers on Sunday night she needed to reprioritise some things in her life after the rollercoaster of 2022, which also saw her win a Logie.

‘I have to be honest with you. The last six months have not been easy, and the relentless targeted toxicity in the media has taken a toll,’ she said.

‘Don’t get me wrong, I’m not above criticism, far from it. I’m human, and I don’t always get it right, none of us do, but by god I’ve tried.’

Wilkinson, who has been a familiar face on Australian screens for over 20 years, said she had some ‘exciting work ideas ahead’ but needed some time to regroup.

In lieu of her departure, here is a look at the some of the more memorable (and perhaps regrettable) moments from a chaotic year in the TV veteran’s career.

Lisa Wilkinson (pictured) has sensationally quit The Project. The embattled TV presenter, 62, made the shock admission at the end of Sunday night’s episode, leaving viewers stunned

During her acceptance speech for a Logie in June (pictured) Wilkinson heaped praise on Ms Higgins, with her words directly leading to her interviewee’s rape trial being delayed

Wilkinson won two awards at the Logies in June, one for being part of The Project team for Most Popular Panel or Current Affairs Program and the other for Outstanding News Coverage for their interview with Brittany Higgins.

The journalist first met with Ms Higgins after the former political staffer went public with allegations her colleague Bruce Lehrmann had raped her inside the office of former Liberal defence industry manager Linda Reynolds in early 2019.

During her acceptance speech for the Logie, Wilkinson heaped praise on Ms Higgins, with her words directly leading to her interviewee’s rape trial being delayed.

The original trial date was slated for June 27 but in the aftermath of Wilkinson’s acceptance speech, a judge delayed the high-profile case ruling it would be ‘unfair’ to continue among the public commentary surrounding the case.

The court case was delayed until October as a result.

Wilkinson was met with furious backlash after it was reported she had met with the Director of Public Prosecutions Shane Drumgold before the Logies to read him the speech she planned to make at the awards show.

Despite being warned about it, the journalist decided to go forward with the speech, and was criticised by Chief Justice Lucy McCallum.

‘Notwithstanding that clear and appropriate warning, upon receiving the award, Ms Wilkinson gave a speech in which she openly referred to and praised the complainant in the present trial,’ she said.

However, while The Project star copped a wave of public scrutiny, Channel Ten stood by Wilkinson and called the criticism ‘inaccurate and unfair’.

The trial of Bruce Lehrmann was aborted by Justice McCallum after three-and-a-half weeks last month, when a juror brought research material into the jury room during deliberations. Lehrmann had pleaded not guilty.

The case is scheduled for retrial in the ACT Supreme Court on February 20, 2023.

Wilkinson made headlines last October over her bombshell memoir that in part details her fraught relationship with her former Today co-host Karl Stefanovic.

At the Logies in June, special care was taken to ensure the former co-hosts were kept well apart in the event seating plan.

Tensions escalated between the pair in late 2021 when Wilkinson released her tell-all memoir, It Wasn’t Meant to Be Like This.

In the book, Wilkinson claimed former co-host Karl, 47, gave her the cold shoulder in the weeks before she was sacked by Nine.

She and her husband Peter Fitzsimons had invited Karl and his partner, Jasmine Yarbrough, to their 25th anniversary vow renewal ceremony in late 2017.

Two days before the event, however, the couple contacted Peter to say they wouldn’t be attending the celebrations because they’d extended their overseas holiday.

‘In the ten days since [the ceremony] Karl hadn’t contacted me, his co-host of almost eleven years, at all. No phone message, no text, no apology, not even a simple congrats. Just complete silence,’ Wilkinson alleged.

In the memoir, the journalist alleged her shock departure from Channel Nine came after she asked for a salary increase to close a significant ‘gender pay gap’ between her and her co-host Stefanovic.

She and her husband Peter Fitzsimons had invited Karl and his partner, Jasmine Yarbrough, to their 25th anniversary vow renewal ceremony in late 2017 (pictured) but they never attended

Honest and open: Lisa Wilkinson admitted nights writing her memoir saw her looking ‘puffy’ with ‘mascara-stained eyes after hours of tears’ in a candid Instagram post in June

In an excerpt from her book, she writes: ‘I wasn’t even asking for Karl’s pay, I was just asking for a slightly fairer share of the spoils that had come from the Today show’s increasingly profitable position in the hugely lucrative breakfast TV market – even more so now that we were at number one.

‘We were a show turning over $60million a year, with well over half of that in profit. But it was the massive gap between Karl and me that was at issue.

‘By staying quiet, I would be complicit in perpetuating the gender pay gap for every woman who came after me.’

In her tell-all memoir, Wilkinson claimed former co-host Karl Stefanovic, 47, gave her the cold shoulder in the weeks before she was sacked by Nine

At the time it was widely reported the Nine Network was ‘unable to meet her expectations’ after she demanded equal pay with Stefanovic.

Nine’s then-CEO Hugh Marks said she had asked for $2.3million per year, which would have surpassed Stefanovic’s base annual salary of $2million.

Five months after its release It Wasn’t Meant to Be Like This was spotted in a K-Mart bargain bin selling for $6 – down from its initial price of $24.

The memoir was nominated in the Australian Book Industry Awards for Book Of The Year (Biography), but did not win.

In May, Wilkinson was accused of being ‘out of touch’ when she grilled the government for causing ‘financial pain’ with their newest scheme (pictured, Lisa’s former home in Mosman)

The comments about Sydney’s property market

In May, Wilkinson was accused of being ‘out of touch’ when she grilled the government for causing ‘financial pain’ with their newest scheme.

The initiative allows first home buyers to put some of their superannuation towards a deposit for a home – a concept the journalist disagreed with.

Is it really responsible to encourage young Aussies to go for short-term gain when they could end up with long-term financial pain.’

Wilkinson was accused by viewers of being ‘out of touch’ due to the fact she has resided in several mansions in Sydney’s most affluent suburbs for most of her life.

She currently lives with her husband, author and journalist Peter FitzSimons, in a multi-million dollar home in Cremorne.

The photo with a criminal

In June, Wilkinson was pictured posing with a notorious OneFour rapper who bashed a stranger with a chair leg in a pokie room.

The photo was uploaded to Instagram by OneFour, and showed the TV star smiling while throwing up a peace sign with rappers Spencer Magologo, Salec Sua and Jerome Misa, after she interviewed the rap group.

Misa, who goes by the rapping name YP, was jailed in 2019 over a brutal pokie room bashing with horrific details uncovered in court at the time.

Misa and former OneFour member Dahcell Ramos brutally assaulted three men at the Carousel Inn in Rooty Hill, leaving one so severely beaten that he was left unconscious on the floor and covered in blood.

OneFour rapper YP was jailed in 2019 over a pokie room bashing at Carousel Inn, Rooty Hill along with former member Dahcell Ramos

When Wilkinson dined alone with just a margarita for company on a Wednesday night in March, the published photos sent her into a spin that quickly got messy

The photo with a margarita

In March, Wilkinson took herself out for a margarita on a quiet Wednesday night, with a photographer capturing the moment for a standard piece of celebrity reporting.

She raged at Daily Mail Australia over the piece and labelled the photographer a ‘creepy old man’ whose actions were ‘menacing’.

That led the photographer who took the photos to defend himself in an open letter refuting her claim he had walked in front of her to shoot his photos.

He also pointed out she was sitting ‘in the front window of a busy hotel on possibly Melbourne’s busiest street’ and was visible to thousands of people walking by.

The photographer also pointed out he was 10 years younger than her – but that making anyone’s age was ‘degrading… and offensive’.

He pointed out Ms Wilkinson has reported widely on the private lives of others – both on mainstream television and in her stints editing gossip magazines, which included Australian Women’s Weekly, Cleo and Dolly.

Wilkinson promised other high-profile female journalists who had recently stepped down from presenting roles a margarita on her as she announced she would be departing The Project on Sunday night.

‘And finally to Leigh Sales, Tracy Grimshaw, and Carrie Bickmore, if you guys are up for a drink, I’ll see you at the bar. The margaritas are on me,’ she said.

‘I have decided it’s time to reprioritise a few things in my life,’ Wilkinson began alongside co-hosts Hamish Macdonald and The Bachelor’s Laura Byrne.

‘And after almost 15 years of the early alarm of breakfast TV, and now another five years here at The Project desk, I’m looking at how I want the coming years to play out both professionally and personally.

‘So, from tonight, I am stepping back from hosting the show.’

‘Sitting at this desk and working with this incredible team – both in front of and behind the camera – has been an absolute privilege. These people are genuinely are some of the most talented and decent humans I know.

‘And you, our passionate, engaged audience, have been so kind in making me feel so welcome in your homes. I’ve had a ball, but for me, right now, it’s time for a change.’

Wilkinson said the last six months had not been easy on her or her loved ones and the ‘relentless targeted toxicity in the media’ had taken a toll.

‘Don’t get me wrong, I’m not above criticism, far from it. I’m human, and I don’t always get it right, none of us do, but by god I’ve tried.

‘I’ve given this job everything I have, and I hope you, at home, know that. I hope I’ve brought you stories that matter and introduced you to people whose lives and experiences might have otherwise never been told, and helped bring into focus issues that deserve our collective attention.

‘So to everyone who has been so incredibly supportive and reached out, particularly in recent months, thank you. You’ll never know how much it has meant to me.’

‘I know being your colleague and friend for some years now, that this is the right decision for you and your family at this point in time,’ Wilkinson’s co-host Hamish Macdonald said

‘I have to be honest with you. The last six months have not been easy, and the relentless targeted toxicity in the media has taken a toll. Not just on me, but on people I love,’ she said