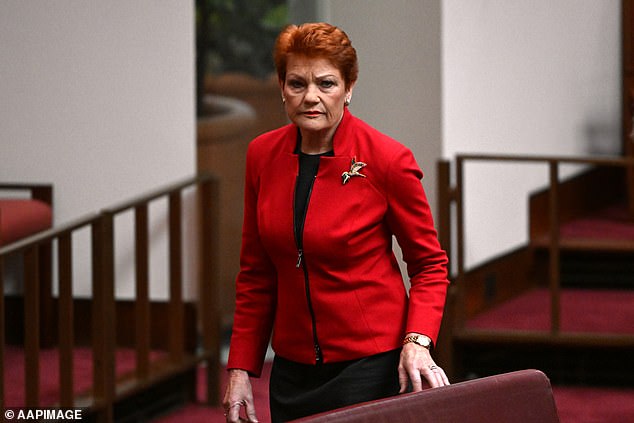 A top Indonesian minister fired back at Pauline Hanson‘s claims that Indonesia‘s foot and mouth disease will enter Australia from Bali because ‘people walk in s***’.

The controversial One Nation leader told Senate on Thursday that Bali’s approach to disease control is ‘totally different to other countries’ in another scathing attack on the government’s response to foot and mouth disease.

A top Indonesian minister fired back at Pauline Hanson’s claims that foot and mouth disease will enter Australia from Bali because ‘people walk in s***’.

‘That s*** is then brought back in their clothing and on their person and back into this country.’

Indonesian Minister for Tourism and Creative Economy Sandiaga Uno hit back at Ms Hanson’s comments, saying they were unfounded and insensitive.

‘Firmly and with straightforwardness, I say, never insult Bali, Indonesia’s tourism icon and centre,’ he said.

‘Oh yes, FYI, Bali is not a country. Next time, please check it first in Google.’

Indonesian Veterinary Medical Association’s Professor Ketut Puja added: ‘Maybe she has never been to Bali. [What she described] is the ancient time.’

‘Today’s Bali is different. You don’t find cows wandering around in Denpasar, for instance. They are definitely not in cities.

‘They are in cages, in villages or tied up at coconut trees in someone’s field.’

Prime Minister Anthony Albanese’s Government has defended its response to viral fragments of foot and mouth disease found in Melbourne, despite worries from the agricultural industry which faces a $80billion loss if the disease enters the country.

The Opposition has called for Australia to shut its borders to Indonesia in response to a foot and mouth disease in the country, including major Australian tourist destination Bali.

‘The key thing I say to people who want a ban is when was the last outbreak globally caused by poo on the boot (of travellers returning from Bali)?,’ he told The Age.

Professor Wiku Adisasmito said earlier this week the rate of the disease’s spread has slowed in Bali and that the government ‘hope to have the disease under control by the end of this year’.

Less than 5 per cent of Indonesia’s livestock have been vaccinated against the disease due to a shortage.

But Professor Adisasmito insisted: ‘We are doing everything we can to minimise the chain of transmission.’