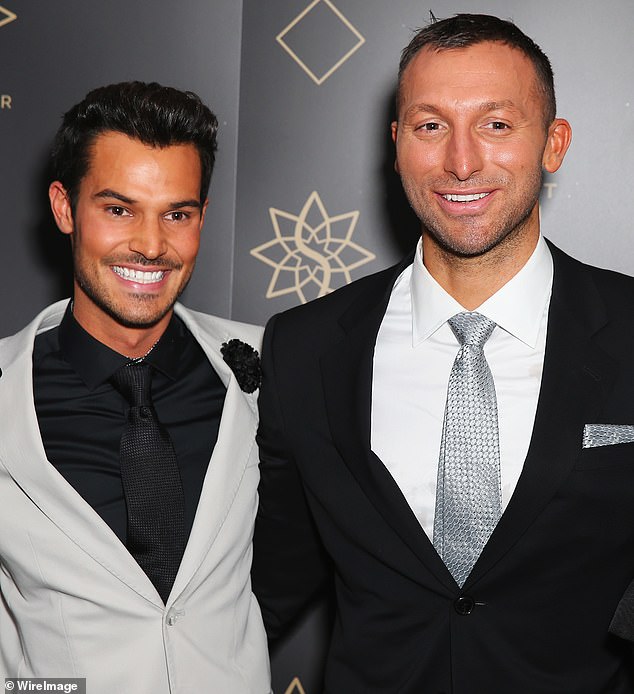 
A relative of Ian Thorpe’s ex boyfriend Ryan Channing has slammed vile rumours claiming the 32-year-old had HIV when he suddenly died in Bali.

Channing was a successful model, lawyer and businessman from Perth before his shock death on the Indonesian resort island on Sunday.

The only detail his family have confirmed about his passing is that it was not the result of Covid, even though he was hospitalised in Sydney with the virus eight weeks ago.

His skincare company, The Blaq Group, confirmed on Thursday that Channing had been battling health issues for a few months prior to his death, but the nature of those issues is unknown.

Trolls took to Channing’s Instagram page overnight on Wednesday to spread unverified rumours that he took his own life, and that he had HIV – a serious illness that attacks the immune system.

But Abbey Channing, a young relative of the skincare brand creator, hit back – politely asking people not to ‘make assumptions about somebody’s death’.

One man wrote: ‘You will notice Ryan went to hospital with Covid.’

‘Classic reaction from an otherwise young, healthy male who is immunocompromised because of HIV.’

Another man wrote: ‘Only 32 years and always the picture of health.’

‘Suicide is a terrible thing, mental health funding needs to be improved.’

After someone asked how he knew Channing took his own life, Ms Channing again wrote: ‘Please don’t make assumptions about somebody’s death.’

Daily Mail Australia has reached out to Ms Channing for comment.

Social media users said Channing (pictured) had HIV, and that he died by suicide. The cause of death has not been revealed

His skincare company, The Blaq Group, posted an emotional tribute on Thursday – remembering the 32-year-old for his ‘fun loving spirit’.

‘It is with heavy heart that we share the news that The Blaq Group founder, Ryan Channing, has passed away at the age of 32.

‘Ryan had been battling with health issues over the past few months and died in hospital after being taken suddenly ill on Sunday May 9th whilst on holidays in Bali.’

‘His inspiration led to the creation of highly regarded skincare brands, Flight Mode and Generation Skin as well as the flagship brand Blaq which strives to empower equality through its distinctive messages of acceptance and inclusivity.’

The shock death was announced on Instagram on Wednesday by his younger brother Jake.

‘Seeing as the news headlines beat my whole family to posting about this unfortunate time in our lives, it’s with a heavy heart I announce that my brother Ryan has recently passed away on Sunday the 8th of May at 32 years of age,’ Jake wrote.

Channing’s skincare company, the Blaq Group, confirmed he had health issued in an emotional tribute

Channing’s sister Charis also wrote a tribute, and later shared it on her Instagram stories with the caption ‘heartbroken’ (pictured)

‘As we seek answers and try come to terms with the heartbreaking loss of my beautiful big brother, we ask for your prayers, support and privacy, he will be forever loved, never forgotten and forever young.

‘To my big brother, I love you, I’ll see you one day soon you’ll be missed more than you know.’

Their sister Charis wrote: ‘Saying goodbye to you on Sunday was the hardest thing my family and I have ever had to do. 32 years young, you’re gone too soon.

‘As we seek answers and try come to terms with the heartbreaking loss of my brother, we ask for your prayers, support and privacy.

‘I know you will be looking down on us and we love you lots.’

Charis also shared the tribute on her Instagram stories with the caption ‘Heartbroken’.

Channing (pictured) was a successful model and businessman from Perth

A friend told News Corp that Channing, a successful businessman, had been ‘battling health issues’ for some time.

‘Everyone is distraught,’ one close friend said.

‘It is just so sad and everyone is shocked.’

Channing was the first long term boyfriend of former Olympic swimming champion Thorpe after coming out as gay.

The pair were in an on-again, off-again relationship for four years until they split for good in 2019.

Channing’s last Instagram post was a photo from Sydney’s St Vincent’s Hospital eight weeks ago after testing positive to the virus.

Channing posted a picture from Sydney’s St Vincent’s Hospital eight weeks ago saying ‘Covid got me GEWD (good)’, after testing positive to the virus

However, it’s not clear whether the virus or its after effects may have played any role in his sudden death.

A representative for Thorpe said his thoughts were with Ryan’s family.

Channing was most recently running a skincare company The Blaq Group, which he founded and owns brands Blaq, Flight Mode and Generation Skin.

‘Generating millions of annual unit sales in both Australia and internationally across his three brands, Ryan has earnt his reputation as one of Australia’s most influential ecommerce entrepreneurs,’ his LinkedIn bio states.

Last July he revealed he was filming a pilot for a new reality show on Netflix in Los Angeles, called The Skintrepreneurs, which would follow his business activities.

Channing was a model who spent time living and working abroad in New York, Paris and Milan before going to university to study commerce, marketing, intellectual property and international law.

He said his time in the modelling industry gave him an eye opening insight into the beauty industry and what consumers want in a beauty product.

He was best known to most Australians for his relationship with Thorpe, one of the country’s greatest ever Olympians.

At one point in their relationship, Channing and Thorpe were actively considering having a child via surrogacy.

When discussing their plans to have a baby in 2019, Channing told Daily Mail Australia: ‘Becoming parents is something that Ian and myself would love to make happen.

‘Unfortunately the laws in Australia are difficult for same sex males in regards to surrogacy – California state law has really progressed in this space which makes it the best option legally.

‘Something I would love to see progress further in Australia so same sex couples don’t have to travel abroad to achieve their family goals.’

Channing founded his skincare business in 2018, aiming to provide gender-neutral products that were all Australian-made and natural.

He was dubbed one of Australia’s most influential ecommerce entrepreneurs when he took his business international to the US and Europe.

A year after splitting with Thorpe, Channing revealed in June, 2020 he was engaged to engineer Leevon Baptiste.

Big Brother Naija star, Nini Singh has been showered with gifts by her fans and…