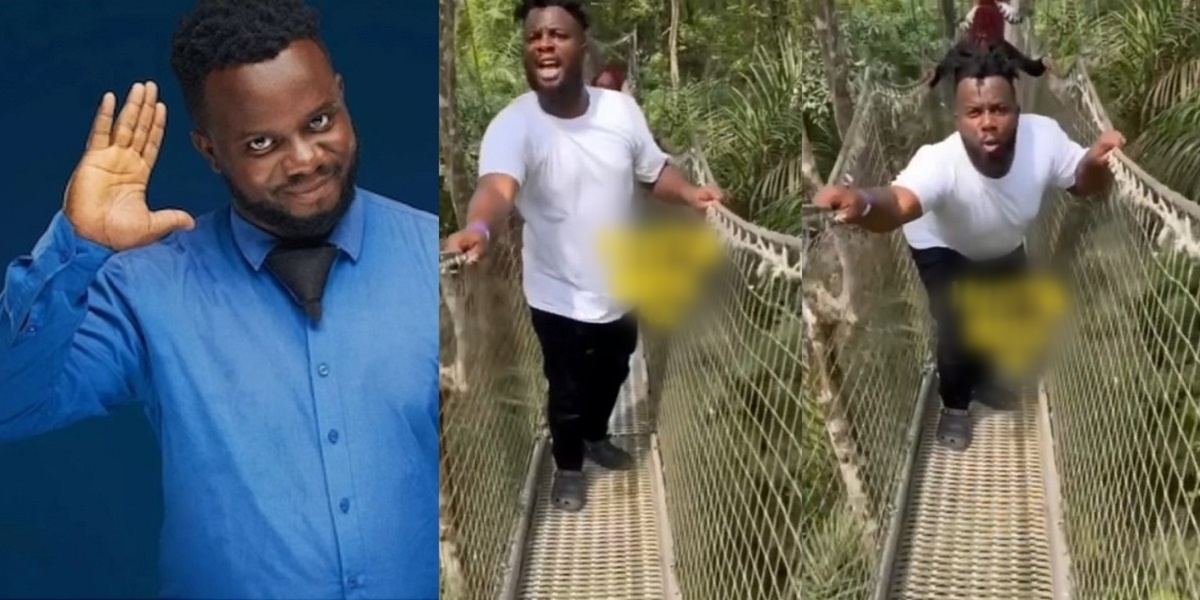 
A video of the hilarious moment popular Instagram skit maker, Sabinus, panicked and screamed for help while participating in a leisure activity in Lagos has been shared online.

The Port Harcourt-based comedian paid a vist to the Lekki Conservation Centre in Lagos to have fun recently, and dared himself to partake in the famous Canopy Walk, but he seemingly regretted his decision immediately he began the walk.

In the trending clip, Sabinus was consumed with fear as he walked on the LCC Canopy Walk, said to be the longest canopy walk in Africa with it’s 401-metre long walkway.

At some point, he started shouting for help because he thought someone was deliberately shaking the platform to startle others.

He also told the guide that the platform was not strong enough. When he couldn’t take it anymore, he said he wasn’t doing again and turned back.

A while back, Sabinus splashed millions of naira on a palatial mansion.

This comes weeks after he acquired a brand new white Mercedes Benz GLE to replace the previous one that got wrecked in an auto crash.

Sabinus took to his social media page to share pictures of his new home. In one of the photos, he’s seen posing inside his customized swimming pool which had his name boldly inscribed on the floor.

In another photo, the excited home owner posed in the boot of his car parked in front of the mansion. However, it’s not clear if the house is in Lagos or his base in Port Harcourt, Rivers state.

Fans, colleagues and well-wishers of the skit-maker have sent massive congratulatory messages to him.