‘I Am Truly Sorry’ – Ken Ofori-Atta Apologizes To Ghanaians | Politics 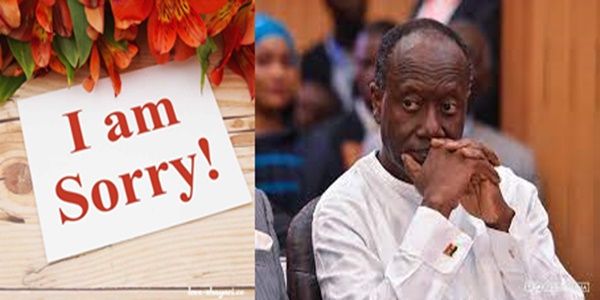 
Finance Minister, Ken Ofori-Atta has rendered an apology to Ghanaians over the economic hardships they are currently facing, for which his competence to continue holding office has come into question.

The Minister is facing a vote of censure and on Friday appeared before an ad-hoc Committee hearing the censure motion filed against him by the Minority in Parliament.

He is proving to the committee why he should not be relieved of his duty due to the allegations levelled against him.

In his opening remarks, the Minister seized the opportunity to address Ghanaians.

“I am truly sorry….we (the NPP-led Akufo-Addo administration) never imagined that the global pandemic such as Covid-19 will inflict so much pain. We have not been resting on our oars” but “will continue to work”, he said.

The Minister began his submissions by asking God’s peace to rest on the nation and reminded Ghanaians of the core causes of the economic problems.

He said; “Peace be unto all of us…According to my understanding of parliamentary history, this might be the first censure of a Minister. So, it must be very grave issues that we are having to address…during the course of my remarks this morning, you can expect forthrightness. The proponents’ motion of censure has accused me of many things and it includes some very disparaging remarks and attacks on my person and integrity. I’m certain that Ghanaians will have a more balanced view of the events that led us here as I take the opportunity to speak to the matters so raised.

“My principal reflections today are to ensure that by the end of these proceedings, the truth would have taken center stage and in the process, any unfounded doubts about my motives, my competence and my character would have been dispelled. Before I proceed with my detailed responses, I’d like to make a personal comment to the Ghanaian people. Since the Akufo-Addo government came into office in 2017, everything we have sought to do was aimed at making the lives of the people better. We have been focused on this vision to improve lives and in the first four years, our efforts were leading to a realization of the vision.”

Mr. Ken Ofori-Atta empathized with Ghanaians saying “when we set out so purposely between 2017 and the early parts of 2020, we never imagined the global pandemic such as COVID with its prolonged economic fallout would inflict such pain and suffering upon the Ghanaian people”.

“The shock to our system has been hard and the impact on our livelihoods severe but we have not been resting on our oars. We continue to work to keep the lights on, to avoid the queues at our filling stations as in other countries, our classrooms are full, our hospitals and dispensaries mostly stocked with medicines. We continue to pay salaries and our roads continue to be built and fixed”, he continued.

The beleaguered Minister, in a remorseful tone, pleaded “use this opportunity to say to the Ghanaian people what I believe, with courage, every Finance Minister around the world may wish to say to their people now. I am truly sorry!”

Also, earlier on Thursday, officials of the Ghana National Petroleum Corporation (GNPC) and the Public Interest and Accountability Committee (PIAC) have made appearances before the committee in relation to the censure motion.

A video showing the adorable moment veteran actress, Rita Dominic passed her bouquet to her…