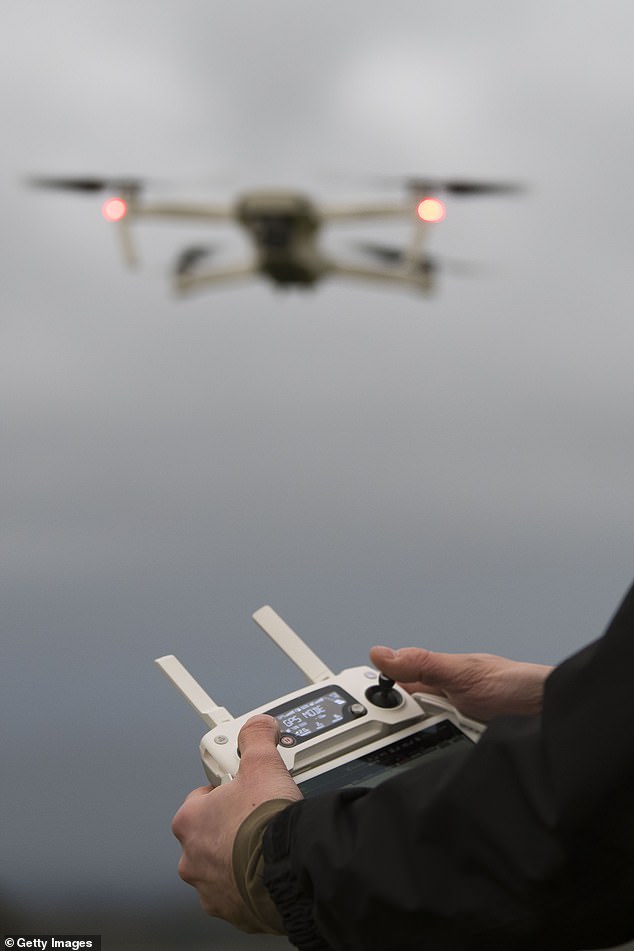 Hundreds of Chinese-made drones have been flying over the Capitol and the White House, using stealth technology to enter the restricted air space, a stunning new report revealed on Wednesday.

The drones – made by the Chinese company DJI – are built with ‘geofencing’ technology meant to prevent them from zipping through Washington D.C.’s many no-fly zones.

But the drones are being tampered with by users so they can buzz over restricted areas in the city, such as the White House and Capitol Hill.

Congress has received classified briefings on the matter amid fears by national security officials that this could become a new means of foreign espionage, Politico reported.

The officials said they do not believe the drones are directed by the Chinese government but fear it’s an example of how the aerial technology can be used.

Hundreds of Chinese-made drones have been flying over restricted air space in Washington D.C.

The drones are made by the Chinese company DJI; above a Djj Mavic 2 drone

In July 2021, the Pentagon said that systems made by DJI Technology ‘pose potential threats to national security.’

In October, the Department of Defense added DJI to a blacklist of firms with alleged links to the Chinese military, paving the way for sanctions to be imposed.

A spokesperson for DJI told Politico that though the firm makes an effort to ensure customers follow regulations ‘we can’t control the end users’ behavior.’

‘Unfortunately, while DJI puts everything in place to identify and notify our customers about areas in which they can’t fly, we can’t control the end users’ behavior,’ said Arianne Burrell, communications manager for DJI Technology, Inc.

‘But we do everything from our end to ensure that they do follow the regulations that are set out by their localities,’ she added.

All commercial drones, which use GPS for navigation, are designed so that they cannot operate within D.C.’s restricted airspace.

But there are several videos on the internet showing how to manipulate the drone so it can fly where it’s not allowed.

Lawmakers on the Senate Homeland Security, Commerce, and Intelligence committees have received classified briefings from federal agencies on the matter.

‘Any technological product with origins in China or Chinese companies holds a real risk and potential of vulnerability that can be exploited both now and in a time of conflict,’ Republican Sen. Marco Rubio of Florida, vice chair of the Intelligence Committee, told Politico.

Congress has received classified briefings on the matter amid fears by national security officials that this could become a new means of foreign espionage, Politico reported

‘But anything that’s technological has the capability of having embedded, in the software or in the actual hardware, vulnerabilities that can be exploited at any given moment.’

U.S.-Chinese relations are at a tense point. President Joe Biden has hammered Beijing for trying to be a global economic force. His administration is working to counter Beijing’s rising global influence.

Share. Facebook Twitter Pinterest LinkedIn Tumblr Email
Previous ArticleUS military says American troops were at risk from Turkish strike on base in Syria this week
Next Article “You will not believe I was the groom, I don’t know how come” – Photographer slyly announces his wedding.