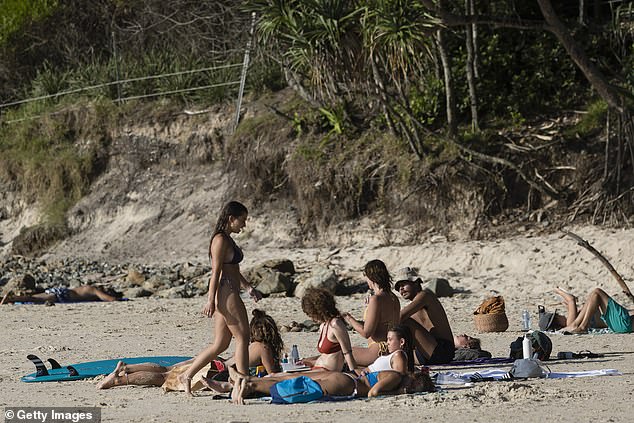 
Byron Bay‘s housing affordability crisis is now so bad the popular town is planning to build public housing so middle-class professionals with degrees can afford to live there.

Younger Generation X and Millennials are increasingly moving to regional areas such as the Gold Coast and Newcastle, with Sydney and Melbourne house prices now beyond the reach of average-income earners buying on their own.

But in Byron Bay, Kiama and Victoria’s Surf Coast, the opposite is happening with the number of new residents moving from a capital city falling over the year.

These coastal havens located a two-hour drive from a major metropolis are now simply too expensive.

Investors cashing in on Airbnb rentals in the Byron Bay region are also being targeted with a new 90-day limit on short-term holiday letting to try and free-up housing for local residents.

Byron Mayor Michael Lyon said expensive property prices and rents also meant the popular town would not have enough staff this summer at restaurants and cafes.

‘It’s a major, major issue for a lot of our community because housing both to buy and to rent are increasingly out of reach for a large proportion of people,’ he told Daily Mail Australia.

‘This impacts on businesses and their ability to hire staff, and there’s not really a business in Byron Shire at the moment that’s not struggling to find staff.

‘We are going to be in real trouble if we have a busy tourist season.’

Like Singapore, Byron Bay could see public housing for the middle class under a ‘contribution scheme’ proposal where 20 per cent of rezoned land would have to go to a council or community housing provider.

‘There has been in the past a reluctance to approve new development but I think, increasingly, our local community is understanding that we are going to build housing,’ Mr Lyon said.

‘This isn’t social housing, this is people like key workers that have the ability to finance the construction cost or to pay the rent.

‘A key worker in a tourist town isn’t just a nurse or a doctor or an ambo, it’s almost everyone: it’s your barista, it’s your planning staff in the council, we’ve got a lot of creatives down here.’

The Byron council has also recently been given approval to impose a 90-day annual cap on short-term holiday letting, targeting those leasing out their properties on Airbnb.

‘Anyone who owns an investment holiday let, who I have no sympathy for I might add given the increase in values that they’ve enjoyed,’ Mr Lyon said.

In April, the Byron Shire Council area became the first regional area to have a median house price above $2million – putting it in the same league as Sydney’s north shore following a 21.1 per cent annual surge, CoreLogic data showed.

In Byron Bay itself, the middle house price is $2.8million.

The housing crisis is now so bad Byron Bay, best known as the home of movie star Chris Hemsworth (pictured), homes could soon be built so the likes of baristas and even council workers can afford to live in the area

Perhaps, unsurprisingly, the number of people moving to Byron from a capital city fell by five per cent in the year to March, new data from the Commonwealth Bank and the Regional Australia Institute showed.

Source: CoreLogic data for April 2022 based on local government areas

‘If you’re not already one of the moderately wealthy to majorly wealthy people, then yes, that’s a struggle,’ Mr Lyon said.

‘The people who can afford to live here –  they’re not coming here to be a barista, they’re not filling jobs locally, they’re just working from home or not working at all,  or even worse, just leaving the house vacant and holiday letting it.

‘It’s all out of balance: to get the balance right, we need to make sure we’ve got the workforce to service the tourists, otherwise we’re going to damage the brand, when people are coming here, they are not going to be welcome.

‘They’re not going to be serviced properly and you’re in a downward spiral.’

‘We don’t have the backpackers coming through either who probably were prepared to live in worse conditions than your average Australian,’ he said.

Curse of the expensive coastal market

Byron Bay wasn’t even the worst-hit regional area when it came to decreasing numbers of permanent arrivals from the big cities.

Kiama on the NSW south coast saw a 13 per cent plunge in new arrivals from a capital city.

The area, a two-hour drive from Sydney, has regional Australia’s second highest median house price of $1.7million, after an annual surge of 34.3 per cent.

Source: Movement from capital cities to regional council areas in the year to March 2022, Commonwealth Bank and Regional Australia Institute

Victoria’s Surf Coast, which includes popular destinations such as Torquay, saw a 15 per cent plunge in new residents from a capital city.

The median house price on the Surf Coast is $1.5million – making it the third most expensive regional area in Australia thanks to its location being close to Geelong and Melbourne.

Values surged by 22.5 per cent in a year – more than double Melbourne’s 10.1 per cent increase during the same period.

But not all expensive regional areas suffered a fall in new residents leaving the big smoke.

Noosa saw a five per cent increase in new residents from a capital city.

This ritzy area on the Sunshine Coast is Australia’s fourth most expensive regional market with a median house price of $1.5million.

The Wingecarribee area, covering Bowral on the Southern Highlands south of Sydney, saw a nine per cent increase in new residents from the big city.

This council area, covering Lennox Head, has a mid-point house price of $1.2million.

Wollongong, south of Sydney, had a six per cent fall in new residents from a big city in an area with a mid-point house price of $1.1million.

But the average age of these newcomers was still young at 31.

Kiama (house pictured) on the NSW South Coast saw a 13 per cent plunge in new arrivals from a capital city. This area, a two-hour drive from Sydney, has regional Australia’s second highest median house price of $1.7million, after an annual surge of 34.3 per cent

Coffs Harbour had an eight per cent fall in new residents from a capital city, where the mid-point house price in the year to April surged by 31.7 per cent to $874,663.

The exodus from the big city to a regional areas was still strong among the other top ten most expensive regional council areas.

The Gold Coast had a seven per cent increase in new residents from the big city and had an 11 per cent national share of those relocating to a regional area.

The average age of these newcomers was 33 in an area just south of Brisbane where $1.094million is the median house price, following a 33.1 per cent annual surge.

The neighbouring Tweed area on the NSW far north coast, bordering Queensland, had a 15 per cent increase in new arrivals leaving behind the congestion.

Queensland’s Sunshine Coast, north of Brisbane, had an eight per cent increase in new arrivals fleeing the overcrowding and a five per cent national share of Australians moving to a regional area.

The average age of these new residents was 36, with Generation Xers making up 20 per cent of these relocating compared with 17 per cent for baby boomers.

But South Australian had the biggest increase in new arrivals fleeing the big smoke – with their numbers doubling in a year.

Ceduna, a coastal council area 800km north-west of Adelaide with just 3,400 people, saw the number of people moving there from a capital city double in the year to March, or rising by 114 per cent.

Victoria’s Surf Coast (Torquay house, pictured) saw a 15 per cent plunge in new residents from capital city, in a council area taking in picturesque Torquay. The median house price here is $1.5million – the third most expensive regional area in Australia which is near Geelong and only an hour’s drive from Melbourne

Another South Australian town, Mount Gambier, had an 85 per cent increase while Port Augusta north of Adelaide had a 74 per cent rise – with 29 the average age of new arrivals at both these places.

The young were also moving to provincial centres within a two-hour drive of a capital city.

Newcastle saw a seven per cent increase in ex-capital city residents, with 30 the average age of these new arrivals.

But Geelong, south-west of Melbourne, had a five per cent fall in new residents from a big city.

Nonetheless, 33 was the average age of new residents in an area where $817,659 is the median house price.

At least it’s much more affordable than Byron Bay and isn’t too far from the beach.