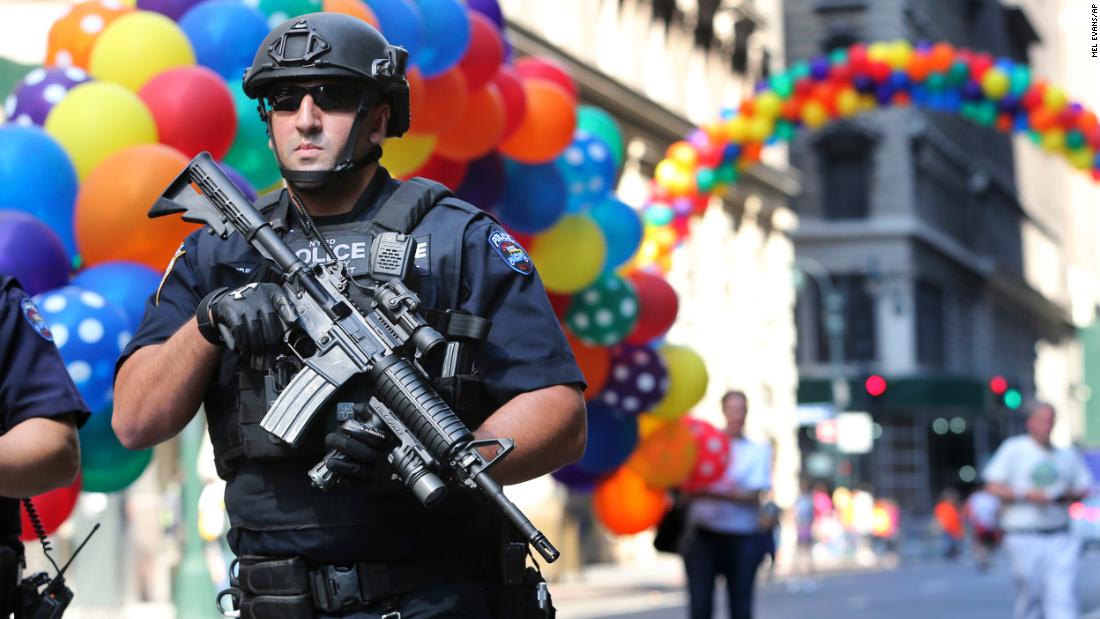 Pride Month is a time when the LGBTQ community and its allies come together to celebrate the freedom to be their most authentic selves. But on Saturday, 31 men believed to be linked to a White nationalist group allegedly attempted to rob the community in Coeur d’Alene, Idaho, of that experience.
Over two dozen men were arrested after an alarmed 911 caller reported a group dressed like a “little army” getting into a moving truck. The group was headed to a Pride in the Park event at Coeur d’Alene City Park and had plans to riot, police said.

When Debra Porta, executive director of Pride Northwest Inc., heard about what happened in Idaho, she felt “disappointment that we still face this kind of thing and reminded that our communities are stronger together than they are apart,” she told CNN in a statement.

Porta has been volunteering with Pride Northwest since 2006 and said safety has always been a top priority at the annual event and this year is no different.

Over 2,000 miles away, Chicago will also be celebrating this weekend and David O’Neal Brown, Chicago’s superintendent of police, said during a Monday news conference he wanted “to put those who might be planning something on notice that we are going to be vigilant to ensure that this event, as well as others, go off safely.”

Threats to the city’s celebrations will not be tolerated, Brown said.

In San Francisco, the city’s Pride parade is scheduled for June 26.

“This week marks six years since the Pulse tragedy, and we commemorate the loss of so many lives taken from us, Carolyn Wysinger, board president of San Francisco Pride told CNN in a statement. Forty-nine people were killed at the gay nightclub in Orlando by an American-born man who’d pledged allegiance to ISIS.

“We have always been vigilant when it comes to safety and are working on a very coordinated basis with local law enforcement, city and community leaders to ensure this year’s Pride is safe and people can enjoy themselves knowing we are taking every precaution possible,” Wysinger said.

It’s not just bigger cities giving their security measures a second look. Oklahomans for Equality, the organizers of Tulsa Pride, said it had increased security measures following a mass shooting at a Tulsa hospital this month.

“We have heightened our security measures with bag checks at every entrance, increased security personnel throughout the festival grounds, and, as always, no weapons will be allowed at Tulsa Pride,” Alex Wade, deputy director of Oklahomans for Equality, said in a Monday statement. “We ask that festivalgoers not engage with antagonistic protestors. Proving a point is not worth risking your safety.”

His message for attendees: Stay together, stay safe, go with someone you trust and remain alert.

At a time where many communities are ramping up their safety protocols, organizers in New York City said they’re not making any changes to protocols or event schedules as a result of the incident in Idaho.

Last month, NYC Pride announced a new set of policies around safety, wellness, accessibility, sustainability and efforts to reinforce its commitment to ensuring the safety of festivalgoers, the organization said. “Based on our existing safety plans we are not making any changes in response to this particular incident,” NYC Pride spokesperson Dan Dimant told CNN in a statement.
In 2021, NYC Pride and Denver Pride publicly banned corrections and law enforcement exhibitors from marching and participating in their uniforms. Similarly in San Francisco, organizers originally decided May 11 that off-duty police officers who march in the June 26 parade wouldn’t be allowed to wear their uniforms. Organizers have amended that policy to say all first responders will march in one contingent, with command staff wearing their mandated uniforms and a small number of LGBTQ officers in uniform will provide security for the contingent, according to a statement. All of these officers will be on-duty, a spokesperson for the organizations said.
Participation by uniformed law enforcement at Pride events can seem threatening or dangerous to an LGBTQ+ community that over decades has been targeted with excessive force, even if their presence is intended to foster a sense of community and safety, advocacy groups have said.

Mirroring San Francisco’s plan to work closely with law enforcement, organizers from Denver PrideFest and Seattle Pride say they are doing the same for their celebrations scheduled for the end of the month.

After two years of postponed Denver PrideFest events due to the pandemic, the organization said it’s excited for this year’s festivities.

As a direct result of what happened in Idaho, the Seattle Police Department and Iron Oak Security, Seattle Pride’s privately contracted security company, will increase the number of Seattle police officers at the parade to a “couple hundred” in addition to roughly 80 Iron Oaks officers, Krystal Marx, the executive director of Seattle Pride, told CNN.