How hard is YOUR neighbourhood being hit by mortgage hikes? 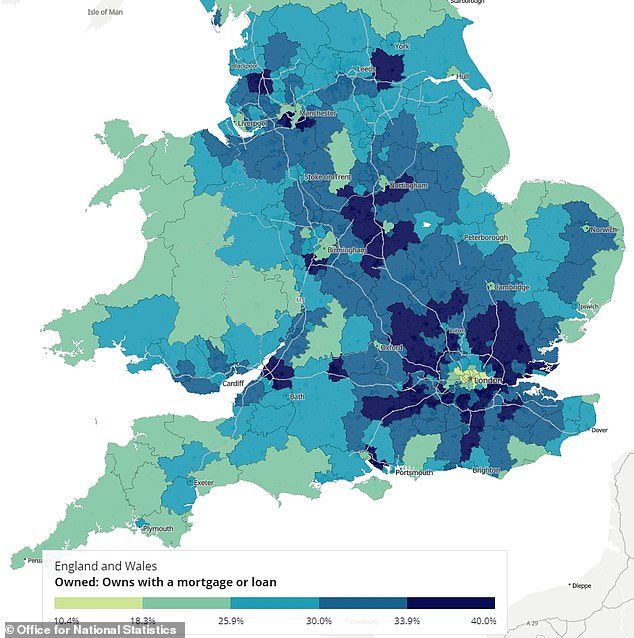 
Conservative-held seats in ‘Blue Wall’ areas are set to be among the hardest hit by the spike in mortgage costs, a new analysis has revealed.

South Northamptonshire, the constituency of Tory former Cabinet minister Andrea Leadsom, has the highest proportion of mortgage borrowers across England and Wales.

Wokingham, held by senior Conservative Sir John Redwood, is the constituency with the next highest proportion of households owned with a mortgage or loan.

The Esher and Walton constituency of Deputy Prime Minister Dominic Raab has the tenth-highest proportion of households owned with a mortgage or loan (38 per cent).

Mr Raab’s seat – among those traditionally Tory-held constituencies in southern England often referred to as the ‘Blue Wall’ – is a top target for the Liberal Democrats as they seek to make further inroads into Conservative heartlands at the next election.

Out of the top 50 constituencies with the highest proportion of households owned with a mortgage or loan, 48 of them are held by the Conservatives and many are in usually Tory-voting commuter areas.

A high proportion of households are owned with a mortgage or loan in commuter areas, census data shows

The analysis, conducted by the Lib Dems and based on recently-published census data, will fuel Tory concerns that rising housing costs could harm them at the next general election.

Turbulence in the mortgage market was most apparent in the aftermath of former prime minister Liz Truss’s disastrous ‘mini-Budget’ in September.

‘Blue Wall’ seats such as Chesham and Amersham, North Shropshire, and Tiverton and Honiton have already been lost by the Conservatives to the Lib Dems at recent by-elections.

More than 1.4million households across the UK are facing increased mortgage costs in the next 12 months alone, a separate study the Office for National Statistics has found.

It showed the majority of fixed rate mortgages coming up for renewal this year were fixed at interest rates below 2 per cent.

This means those borrowers are set for a steep rise in their monthly repayments when they renew, with interest rates having rocketed since they took out their mortgages.

The average interest rate on new fixed rate mortgages is currently around 6 per cent, or around 4.4 per cent on variable rate mortgages.

Interest rates having rocketed since the beginning of last year, with borrowers set for a steep rise in their monthly repayments when they renew

The ONS found that 353,000 fixed rate mortgages will have to be renewed between January and March this year, with 371,000 coming up for renewal between April to June

A recent report from the Bank of England suggested those currently on fixed rates set to expire by the end of 2023 are facing average monthly repayment increases of around £250 (or an extra £3,000 a year) when refinancing to a new fixed rate.

The Lib Dems have called on the Government to set up a ‘Mortgage Protection Fund’ – paid for by reversing cuts to taxes on banks – to assist families facing crippling increases in their loan repayments.

This would be targeted at those most at risk of reposession, such as homeowners on the lowest incomes and those seeing the sharpest rises in mortgage rates.

Under the party’s plans, anyone who sees their mortgage payments rise by more than 10 per cent of their household income would get a grant to cover the cost of that rise for the next year, up to a maximum of £300 a month.

‘Millions of people now face having to cut back or even sell their home, with commuter belt areas set to be hardest hit.

‘Conservative MPs across the “Blue Wall” face a reckoning at the next election unless they fix this mortgage nightmare.

‘People will never forgive the Conservative Party for crashing the economy, sending mortgages spiralling and making the public pay to clean up their mess.’