House Republicans pass bill that rolls back $72B in IRS funds 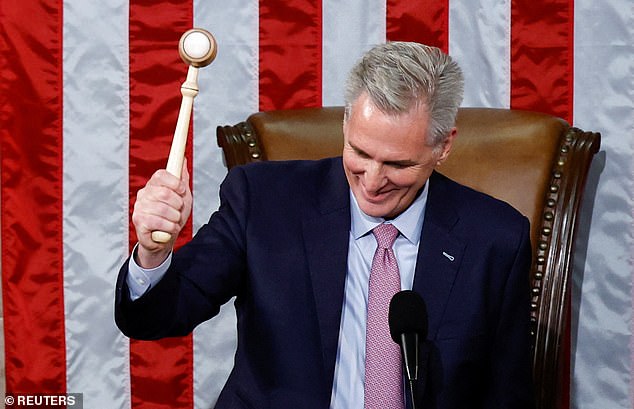 
House Republicans make good on campaign promise and pass bill that cuts $72 billion from the IRS and ‘repeals 87,000 IRS agents’

The House Republican majority passed a bill Monday night to claw back $72 billion from the Internal Revenue Service, making good on a pledge to voters to ‘repeal 87,000 IRS agents.’

It was a party-line vote of 221 to 210, with one Republican and two Democrats not voting.

‘Promises made,’ House Speaker Kevin McCarthy said as he banged the gavel and Republicans in the House chamber cheered.

The legislation, called the Family and Small Business Taxpayer Protection Act, would take away all but $8 billion of the $80 billion passed in the Inflation Reduction Act to bolster the ranks of the IRS.

Rep. Kevin McCarthy happily bangs the gavel after finally being elected Speaker of the House

The bill will be dead on arrival in the U.S. Senate, which is still controlled by the Democrats – 51 to 48, as Republican Nebraska Sen. Ben Sasse left to become president of the University of Florida on Monday.

Even if 12 Senate Democrats voted alongside Republicans to override a filibuster threat, the legislation would be killed by President Joe Biden’s veto pen.

The Biden White House called it a ‘reckless bill’ that demonstrated the House Republicans’ ‘top economic priority is to allow the rich and multibillion-dollar corporations to skip out on their taxes, while making life harder for ordinary, middle-class families that pay the taxes they owe.’

‘To be clear, the Treasury Secretary has already directed that none of the additional IRS resources be used to increase audit rates relative to historical levels for small businesses or households with incomes below $400,000,’ said a statement from the Office of Management and Budget.

While the number of audits on middle-income earners may rise, it will rise in line with the audit rate of high earners, Treasury Sec. Janet Yellen said in a directive to IRS Chief Charles Rettig in August.

During the 2022 midterm campaign, now House Speaker Kevin McCarthy had pledged to roll back the money devoted to boosting tax enforcement at the IRS if the Republicans were to retake the House of Representatives.

‘Our job is to work for you, not go after you,’ McCarthy said when rolling out House Republicans’ ‘Commitment to America’ outside of Pittsburgh in September.

McCarthy reiterated that pledge during his speech upon winning the speakership in the early hours of Saturday morning.

‘Our first bill will repeal funding for 87,000 new IRS agents. Because the government should be here to help you, not go after you,’ he said in his victory address.

The 87,000 figure came from a Treasury Department assessment of how many IRS employees could be hired using the $80 billion appropriation over 10 years – not the actual legislation – but Republicans used the figure to drum up opposition to the Inflation Reduction Act.

Smith, of Nebraska, had been seeking to chair the powerful tax-writing committee – Ways and Means – but was beat out for the top slot by Rep. Jason Smith of Missouri.

The bill leaves in place the funding for customer service improvement and technological updates but rescinds funding for new audits.

Of the $80 billion, just $3.2 billion – or four percent – was devoted to improving taxpayer service.

‘The last thing the American people need right now are more audits from an out-of-control, bloated IRS,’ Smith said in a statement ahead of the vote.

‘The Administration’s $45 billion plan to hire 87,000 new IRS agents and target Americans with a flood of audits was absurd from the start, especially as families and small business owners struggle under skyrocketing prices brought on by reckless government spending,’ Steel added in a statement.

The new audits were to offset some $739 billion in mostly climate and social spending.

The Congressional Budget Office estimated the GOP-approved bill would add around $114 billion to the deficit.