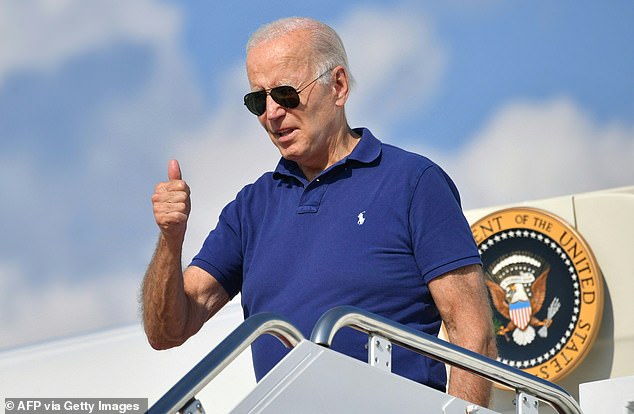 Forty-five percent of Americans approve of President Biden’s job in office while Republicans are projected to win back the House with 226 seats, a slight dip from last month, according to a new CBS-YouGov poll.

Amid a series of major Democratic wins with the Inflation Reduction Act, the CHIPS Act and student loan forgiveness, Biden’s approval rating has ticked up from one month ago, now standing at 45-55 percent vs. last month’s 42-58 percent.

A slim majority of voters overall approve of both the Inflation Reduction Act and student loan forgiveness: 55 percent-45 percent for the former, 54 percent to 46 percent for the latter.

His overall job approval among registered voters is now the highest it’s been since February, according to the poll.

Forty-five percent of Americans approve of President Biden’s job in office while Republicans are projected to win back the House with 226 seats, a slight dip from last month, according to a new CBS-YouGov poll

Unsurprisingly, most of Biden’s increased approval comes from Democrats, eight percent more of whom now say they strongly approve of him than in July.

Fifty-two percent of Democrats now say things are going at least somewhat well for the nation, compared to 39 percent in July.

Biden’s highest approval ratings were for his handling of Russia and Ukraine, 46 percent approve, and climate change, 45 percent.

Still, inflation remains a top concern for voters, and Republicans are still widely believed to have the edge in handling the matter.

Democrats will now have to turn that increased outlook into voter turnout in the midterm elections. The poll projects that Republicans will take four less seats than they were expected to in July, when they were projected to win 230. The GOP only needs 218 seats to wrest power from Democrats in the House.

Meanwhile, Americans are split down a partisan line on whether they believe the FBI raid on Trump’s Mar-a-Lago home was to protect national security, while Independents side slightly more with Democrats on the matter.