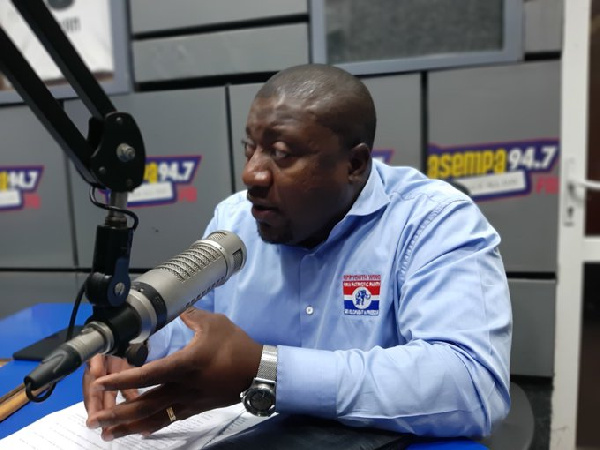 The contractor in charge of the construction of a Children’s Ward for Tafo Government Hospital has moved to the site with works barely at the foundation level after several months following a report by MyNewsGh.com.

This Nana B at 40 hospital project was born months after the NPP youth organizer was forced to vacate the NSS bungalow after continuously staying there since 2018 when he became NPP Youth Organizer and resigned as NSS Deputy Director.

Sources whispered that Mr. Henry Nana Boakye was refusing to vacate the building due to “lack of option” at the time.

In a twisted surprise, as part of celebrations leading to his 40th birthday as National Youth Organizer, Nana B cut sod for the construction of “an ultra-modern” 29-Bed Children’s Ward and Out Patients’ Department (OPD) Clinic at Tafo General Hospital in the Ashanti region.

The sod-cutting event happened on Sunday, 25th July 2021 at a mini-durbar at the Tafo General Hospital with Chiefs and MP for the area in attendance.

Months on, the Nana B at 40 projects stalled without any updates to the people of Tafo.

After a MyNewsGh.com report, a Member of Parliament for Tafo who visited the site said works are “going on as scheduled. This is a self-financed project by my big brother and mentor, Nana Boakye Nana B as a birthday gift to the people of Old Tafo, ” he wrote.

“I visited the Project Site with Nana Kwame Asafo. The project is at the foundation level and the contractors have promised to complete the project before the next birthday of Lawyer Henry Nana Boakye. Thank you Henry Nana Boakye and the people of Old Tafo are extremely grateful!” he added.

Prior to this, however, the project appeared to have been abandoned by the Buffer Stock Board Chairman who sources keep saying is struggling to build his own house after 5 years in power.