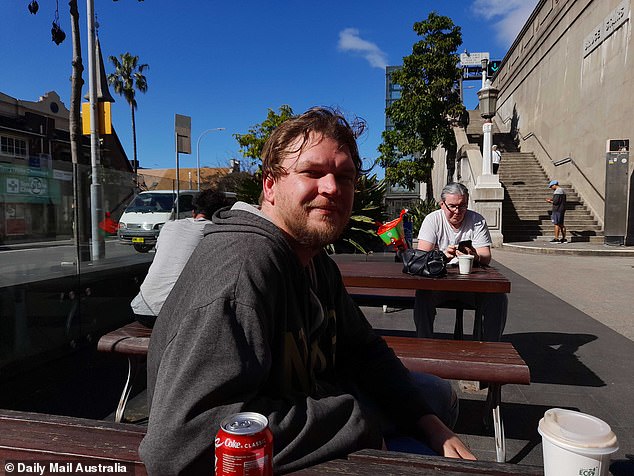 
A homeless former teacher sleeping rough in one of Australia’s poshest suburbs has had a bad reception from some locals who fear his tiny camp could damage the grass and may be the beginnings of a ‘tent city’.

Thomas Hardy-Burstow, a former teacher and waiter from Darwin, has slept in a tent outside Milsons Point train station in Kirribilli, in Sydney‘s north, for the past six weeks.

The suburb has a median house price of $3.85million and is home to both the prime minister and governor-general’s official residences – plus a small contingent of rough sleepers – sparking calls from some millionaire’s row residents for them to be moved on.

Despite his tent being set on fire and his belongings stolen, Mr Hardy-Burstow had only kind words for other Australians and called for ‘compassion’ from the community.

Mr Hardy-Burstow said he was forced to move to a smaller tent after his first, bigger tent was destroyed in a fire last week

Of the scenic location metres away from the city’s world-famous harbour, Mr Hardy-Burstow said: ‘This is a spot people come to when they need to talk and get things out.’

But some locals just want Mr Hardy-Burstow’s tent, and a few others in the area, to go.

‘How many tents are acceptable? One? Ten? A hundred? A thousand?’ one man posted online in a local community group.

Another woman warned: ‘If you allow one person to set up camp, next thing your going to have bigger problem to solve with humpies set up all over the place… in the parklands around Kirribilli.’

A third claimed ‘many [homeless] choose to live that way’ and that ‘they go the pub during the day and return at night to sleep’.

‘In Chatswood alternative accommodation was found and offered to them. Most rejected it and were soon back on the streets. Chatswood is now a magnet for them,’ the same man said.

The former North Sydney mayor Jilly Gibson, said residents have approached her concerned that tents pitched outside the station could ‘kill off the grass’.

‘They’re scared and think it’s inappropriate and Bradfield Park could be turned into some sort of tent city. There are also concerns the tents on the grass could kill off the lawn,’ Ms Gibson told The North Shore Times.

Homeless people living at Kirribilli have been met with a mixed reaction by some locals, who worry their tents may damage property or ruin the grass

One homeless person at Kirribilli has a friendly sign beside their bedding that reads ‘Homeless but we’re doing our best to get by’ next to a donations bucket. Mission Australia said the homeless deserve to be treated with dignity and respect

Mr Hardy-Burstow said there are still kind souls out there – even though he’s had his possessions broken and stolen, including a bicycle, and his first tent torched.

Some locals give him $20 and $10 notes to help him pay for meals, he said. ‘They are pretty generous, but for that (his tent being set alight) to happen?’

”You shouldn’t try to [harm] people when they’re sleeping on the ground.’

Other homeless people in the area shelter in a nearby tunnel, including one person who keeps two cats in a tidy set-up.

One has a friendly sign beside their bedding that reads ‘homeless but we’re doing our best’ next to a donations bucket.

‘Thank you and enjoy this wonderful day’ written on the lid in permanent marker.

And not all Kirribilli locals want the homeless gone.

‘Whilst it may be unsightly to most, there is a human being that calls this home and is warm and comfortable to them and I’m for them having some warmth and a sense of home,’ one man posted.

‘God willing it never happens to you and your family,’ a woman posted.

‘But personally the attitude Aussies have of ‘not in my backyard’ stinks.’

Several homeless people are sleeping at posh Kirribilli in tents or sheltering in the Burton Street tunnel, including one person who keeps two cats in a tidy set-up

Housing and cost of living crises collide to increase homelessness

Mission Australia said it has seen an increased demand for emergency relief services because ‘the increasing cost of living is adding pressure on households’.

It claimed ‘only 1 per cent of properties are affordable for a person earning a full-time minimum wage in Greater Sydney’.

‘This drops to less than 1 per cent for a person relying on income support from the government.

‘The housing affordability crisis is placing more and more people at risk of homelessness.

‘Sadly, this means that vulnerable people and people on low incomes are more likely to be pushed into homelessness.’

‘I have been homeless, been in domestic violence refuge, and it’s not easy. Maybe I can be a ear to listen, as I’m lucky to be alive with what I went thru with in the past,’ said another local.

According to the latest data from the City of Sydney Council, 225 people are sleeping rough just in inner Sydney alone, and 269 are in crisis and temporary accommodation.

But Mission Australia said the true number is much higher, because of the problem of ‘hidden homelessness’.

‘Most aren’t sleeping rough in tents or on the streets, which is a common misunderstanding,’ said Mission Australia State Director for NSW Nada Nasser.

‘People who are homeless are more likely to live in unsafe or insecure living conditions like temporary refuges, caravan parks, overcrowded accommodation, a garage or couch surfing.’

Ms Nasser said many Australians attribute homelessness to ‘failing of character when in reality it’s the result of a failure of policy and investment’.

‘People experiencing homelessness are no different from you or me.

‘They all have unique stories and judging a person who is homeless is unfair.

‘Just as you might offer help or ask if someone is okay if you see someone in distress, there’s no difference in doing the same for someone who is sleeping rough.

‘People who are homeless deserve to be treated with dignity and respect.’

A NSW Police spokesman said only minor damage was sustained to Mr Hardy-Burstow’s tent and the fire was extinguished when officers attended.  Daily Mail Australia approached Jilly Gibson for comment.