Here’s how the Black Stars schedule looks like today 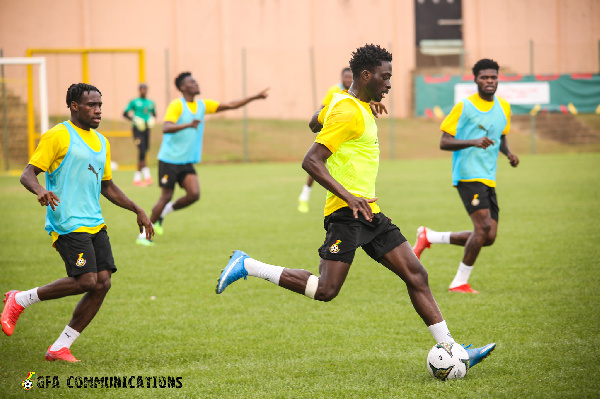 The Black Stars of Ghana will attempt to revive their 2021 AFCON hopes when they face off with Gabon at the Amadu Ahidjo stadium in Yaoundé, Cameroon tomorrow at 7 pm GMT.

The Black Stars know they need to turn things around after their opening day defeat to Morocco last Monday.

Ghana is currently bottom of Group C after the first round of games but there is general optimism among officials and players that the Black Stars can beat Gabon to get back on track.

Ahead of the Gabon game, GhanaWeb has outlined the major activities of the Black Stars for today, Thursday, January 13, 2022.

As is the rule of the competition, the Black Stars will hold an official press conference on the eve of their games. So today, at 12:45 PM GMT, the coach and one other player will face the media and answer questions regarding the game tomorrow.

It is expected that journalists will ask about the availability of Andre Ayew for the game after he missed training yesterday as a precautionary measure. The skipper got a cut above his right eye in the game against Morocco and also revealed that he had not been unwell prior to the first game.

Also expected to dominate the presser is when Kudus Mohammed will be arriving in camp and if he will be fit for the next game.

At 7:30 PM (GMT) the Black Stars will hold their last training session at the stadium Annex and it is during this session that usually journalists get a fair idea of which players are likely to start the next game.

Usually, it is only the first 15 minutes of that session that are allowed to be filmed by the press.

GhanaWeb will keep you updated on the latest development in the camp of the Black Stars.

The Colorado Fire was sparked in Palo Colorado Canyon in the Big Sur region, according…