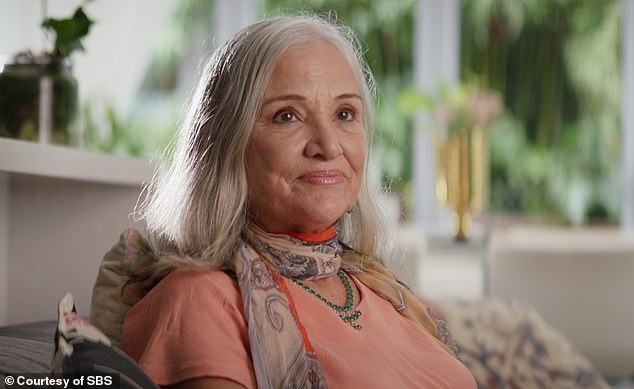 
A flattering letter from their mum’s fertility doctor has led to a woman and her twin sister discovering he was their dad after he secretly inseminated her with his own sperm without her knowledge.

Ms Edel told Daily Mail Australia that in 1959 her mother was desperate for a child but her father was infertile.

Her aunty, who was a doctor at Balmain Hospital in Sydney, referred her to Dr John Doherty – a ‘pioneering’ gynaecologist and obstetrician who was ‘helping women out’.

Helen Edel (pictured) along with her identical twin sister Anne Smee, 62, spent forty years searching for the identity of their mother’s sperm donor

Ms Edel and her sister were born in 1960 and it wasn’t until 20 years later that they received the ‘shock of their life’ when their step-father told them during an argument that they were conceived with the help of a donor.

‘All of a sudden we’re finding out that our father that brought us up wasn’t really our father,’ Ms Edel said.

Ms Edel and her sister persuaded their mother to call Dr Doherty and ask for records that could help identify the sperm donor.

To their surprise, they received a letter back from Dr Doherty with a detailed description of the anonymous donor.

‘Physically, he was considered to be a ruggedly good-looking young man with a squarish face and good teeth when he laughed. He was quite athletic.’

Mr Doherty confirmed the donor was a doctor but refused to release his name or any medical history.

In 2003, some 20 years later, Ms Edel joined a Donor Conception Support Group and shared the letter, hoping for fresh leads in her search for her biological father.

Ms Edel said the pair discovered they were donor conceived in their 20s and that their mother went to a doctor at Balmain Hospital, Sydney, for fertility treatment (pictured, Helen and Anne as babies)

Dr Doherty was dead but Ms Edel was able to locate his son, who lived in Tamworth, and asked him for a DNA test.

‘Lo and behold, we had the same percentage on our DNA as his son. Dr Doherty was our father,’ Ms Edel said.

Ms Edel said she felt ‘relief’ but also ‘sadness’ after discovering the doctor had used his sperm without her mother’s consent.

‘It was the end of an identity crisis so a bit of relief because we found out where we came from, we found out who our father was, found our bloodline and our genetics,’ Ms Edel said.

‘But also a bit of sadness because he wanted nothing to do with us and it was all a big secret.’

When asked why she thinks Dr Doherty used his own sperm, Ms Edel paused for a moment and said she believed he wanted to help women that desperately wanted to have children but didn’t really think about the bigger picture.

The twin sisters discovered they also have another half-sister that was donor conceived by Dr Doherty.

‘It worries us a little bit that there could be other people walking around with the same DNA as us. What would happen if their children met ours?,’ Ms Edel said.

The doctor sent the pair a letter describing in detail the sperm donor but would not reveal his identity. Some 20-years later, they discovered the doctor was their biological father after a DNA test with his son (pictured, Helen and Anne as teenagers)

She believes Australian clinics need to keep a strict record of sperm donors and a detailed donor register so that children don’t feel like they come from a ghost.

‘A bit of a story about them, their professions, they need to be a lot more transparent.

‘So then, when the little baby that’s born that says “well, dad donated his sperm, he was this, this and that” and they have a photograph of him and a story.

‘They need to change it because you don’t want to feel like you came from a ghost.’

Healthy men between the age of 21 and 45 can donate sperm in Australia as a de-identified – identity not shared with the recipient – or identified sperm donor.

Non-identifying information including interests, physical description medical history and family history, is provided to the recipients and donor-conceived children.

Ms Edel’s story will appear in SBS’s ‘Inconceivable: The Secret Business of Breeding Humans’. The one-hour documentary is based on journalist Sarah Dingle’s (pictured) search for her biological father

Once a donor conceived child turns 18, they can access identifying information including name, date of birth and address.

The one-hour documentary, based on journalist Sarah Dingle’s search for her biological father, reveals the ‘deeply unethical and pathologically secretive business’ of the fertility industry in Australia.