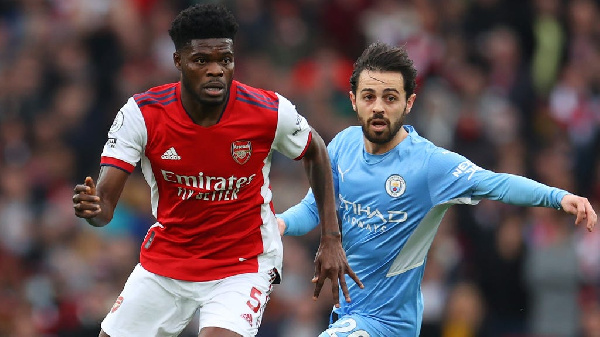 
Thomas Partey in action for Arsenal

Gilberto Silva has likened Arsenal midfielder Thomas Partey to Patrick Vieira after his impressive display against Manchester City in the 2-1 Premier League defeat on Saturday.

The 28-year-old Ghana international was in great form as he controlled the midfield well but the Gunners could not get a point from the game as they suffered defeat after a late strike courtesy of Rodri.

Arsenal had taken a deserved lead in the 31st minute through Bukayo Saka but Algeria captain Riyad Mahrez levelled matters for Man City after he converted from the penalty spot in the 59th minute.

With the game heading for a draw, Rodri scored the winner in added time to break the hearts of Arsenal players and fans at Emirates Stadium.

Despite the defeat, the Brazilian, who managed 170 appearances for the Gunners and scored 17 goals, has praised the performance of the Black Star and that of defender Gabriel Magalhaes.

“He looked like Patrick Vieira,” Gilberto said while replying to a message posted by Arsenal on their Twitter handle as well as adding, “He was very good. I really like him.”

On Gabriel’s display, Gilberto said: “Lots of positives Gabriel. The team looks like it has lots of spirits, it’s great to see. Keep going!”

After the game, Arsenal assistant coach Albert Stuivenberg, who was the man on the touchline in the absence of Mikel Arteta, who had tested positive for Covid, praised the team’s display, especially in the first half.

“In the first half, especially, we had many moments where we pressed them high, sometimes they broke our press, they’re a great team so they have many solutions, but even on the goalkeeper, we tried to press them high many times and ended up winning the ball in their half,” Stuivenberg told the club’s official website.

“So we were ready to go on the high press, but against this Man City, sometimes you are forced back, but when you are in your own half, it’s about how you defend compact and break from that and we did that a few times really well.”

A big performance from our No 5…

Partey, who joined the Gunners from Atletico Madrid, will head for Cameroon to represent Ghana at the Africa Cup of Nations.

The African competition will kick off on January 9 and Partey’s Black Stars have been drawn in Group C alongside Comoros, Gabon, and Morocco and they will face the Atlas Lions in their opener at Ahmadou Ahidjo Stadium on January 10.