Gov’t will continue to encourage farmers to use organic fertilisers 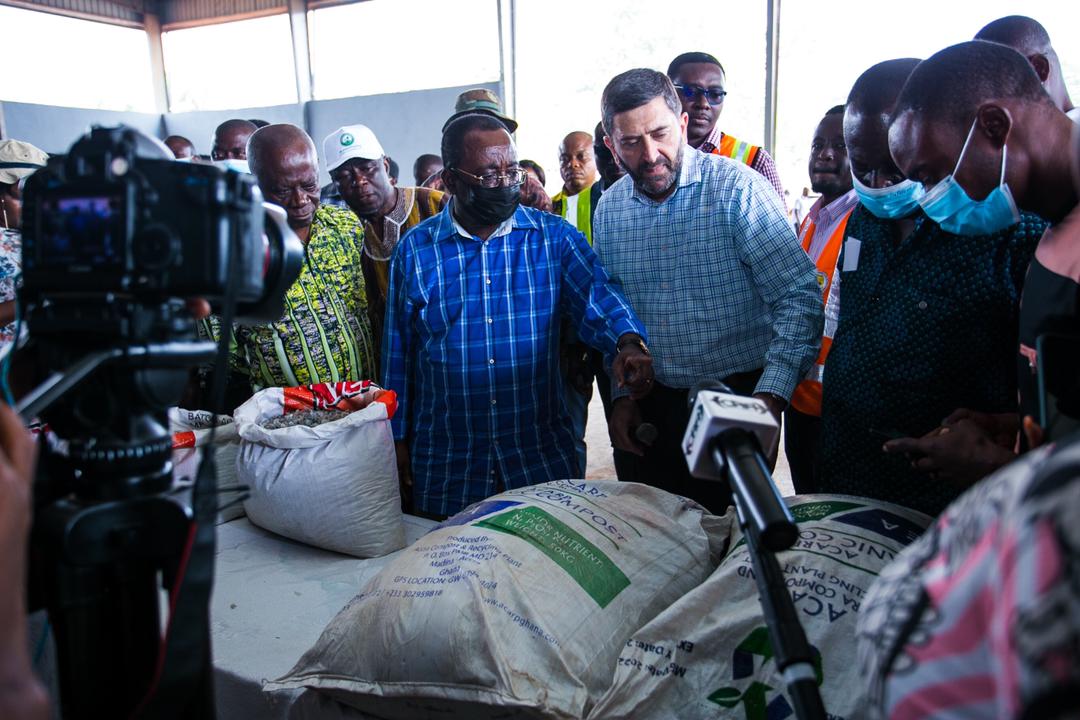 
The Minister for Food and Agriculture (MoFA), Dr. Owusu Afriyie Akoto, has re-affirmed that the government will continue to encourage farmers to use and apply organic fertilisers.

This, he said, has become necessary because of the global shortage of inorganic fertiliser and its attendant high prices.

“The issue is to do with the shortage of organic fertiliser. We see that there is a switch because of the high prices of the inorganic fertiliser to organic liquid fertiliser which they [farmers] claim is not as effective as the NPK. But at least it is better than nothing,” Dr. Akoto averred.

The Minister made the observation while briefing journalists at a maize farm at the Ghana Prison Service in Duayaw Nkwanta, Ahafo Region, during his regional working tour on Monday, June 13, 2022.

The six-day working tour which began in Ahafo will take the Minister to regions including Bono, Bono East, Ashanti and Eastern.

As part of the trip, the Minister will undertake field tours to some project sites and farms and also use the opportunity to interact with farmers and acquaint himself with the challenges confronting their activities.

According to Dr. Akoto, he has been amazed so far by the cooperation of farmers regarding the use of organic fertilisers.

“I was amazed. I thought it was going to take a year or two to persuade farmers to switch, but necessity is the mother of all inventions, so they are really making do with the constraints of the fertiliser shortage.”

“From what we have seen, the weather has been good. Wherever we have been we have seen the maize tasselling very well at this time of the year, and they all admit that compared to last year the rainfall has been excellent,” he said.

Receiving the Minister and his team, Nana Bosomprah expressed delight at the Minister’s visit to the region, adding that “as a cocoa farmer myself, I am very keen on agriculture.”

He bemoaned the fact that rain was not falling as it was expected, attributing the development to human activities, including indiscriminate cutting down of trees in the forests in the region.

He appealed to the Minister to ensure that farmers have more supply of fertilisers to aid them in their farming activities.

According to the Omanhene of Goaso, it was sad that farmers did not have any help in terms of pricing of their commodities, lamenting that the situation has led to buyers giving any prices.

He, therefore, called for the introduction of pricing for farm produce from the food basket regions to avoid cheating and exploitation of farmers.

He said it was crucial for the government to change some of the existing laws to make agriculture more lucrative, especially for the youth.

He also made a strong case for better offices for agriculture offices in the region.

“Ghanaian farmers are improving in rice production and packaging and it is important that we take advantage of this to create laws to enhance patronage,” he said.

He appealed to the government for machines to help in rice processing to enable farmers to produce more.

Nana Bosomprah urged the military to do whatever is necessary to protect the remaining forest reserves in the region.

.“We must also construct warehouses to store food produced under the Plant for Food and Jobs to address any food shortage,” he indicated.

Responding, Dr. Akoto admitted that the high prices of food products on the markets were of concern to the government.

He assured that the government was working on bringing scales to support in the pricing of food products.

Again, he disclosed that the government has imported machines from Brazil to help in rice production in the country, hence promised that 10 of the millers would be brought to the region to support rice farmers.

Other places visited by the Minister included the Integrated Recycling and Compost Plant (IRECoP) at Ahoduom Nkwanta in the Asunafo North. Municipality.

He also visited and interacted with ginger farmers at Asutifi South. Mrs. Christiana Asumadu who acted as the spokesperson for the ginger farmer, lamented the high cost of agricultural inputs.

“There is also the issue of low farm yields due to the lack of ready markets to purchase their gingers after harvest,” she indicated.

Gene discovery may explain why more women get Alzheimer’s disease