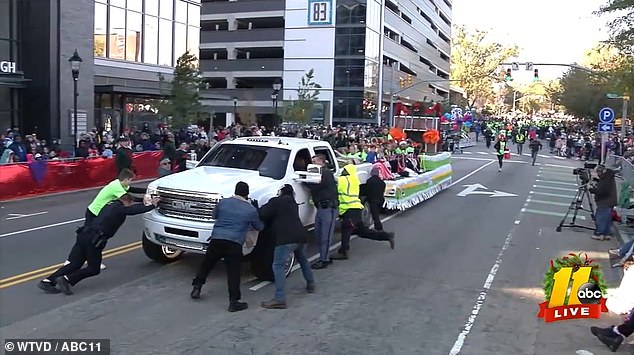 
Girl killed after being hit by out-of-control truck at a Christmas Parade in North Carolina: Driver armed with gun is charged after onlookers claim he yelled the brakes weren’t working

By Joseph Michalitsianos For Dailymail.Com

A Christmas parade in North Carolina has been canceled after a float driver in the parade lost control of his truck and accidentally hit and killed a young girl.

The driver is facing charges of misdemeanor death by motor vehicle, careless and reckless driving, improper equipment, unsafe movement and carrying a firearm in a parade.

Police confirmed the girl was hit by the truck while it was at a low rate of speed, and despite life-saving efforts, the girl died. No other paradegoers were injured.

Videos show the moments the truck was unable to stop and continued barging into a crowd of dancers, with the driver shouting out the window that he could not brake.

Witnesses said the white truck with the CC& Co. Dance float was the one that lost control, and dancers in neon green outfits can be seen panicking nearby the float.

The dance company released a statement that said ‘We are still in shock as write these words to you. We also know many of our young ones witnessed this tragedy and that is hard to fathom as well.’

The statement asked people to ‘please reach out to each other’ and ‘pray for our dance families.’

They also asked people to ‘please refrain from judgement regarding what happened until we know more and the authorities have finished their investigation.’

‘What we do know is our hearts are broken and we must find ways to help each other through this,’ the statement continued.

We never expected to experience a day like today, and the only thing getting us through is the tremendous we’ve seen expressed among our CC & Co. Dance family,’ the statement concluded.

Other video shows bystanders and cops jumping into action and running to physically stop the runaway truck, which eventually slowed to a halt on the road.

The video showed six men bravely jumping in front of the truck and slowing it down by pushing it.

The dance troupe had 200 performers in the parade, with some as young as 5 years old.

Raleigh police released a statement saying ‘Our hearts go out to the family of the victim and those who witnessed this tragic incident. The victim’s family has asked for privacy during this very difficult time.’

The accident happened at Hillsborough Road at Boylan Avenue in Raleigh, the capital of North Carolina.

Police have asked pedestrians and residents to avoid the area as the intersection has been closed indefinitely.

Mayor Mary-Ann Baldwin said her heart ‘aches for the young girl hit in a tragic accident on the parade route.’

Video shows the moment the truck apparently loses control and continues driving into the dancers, as the driver shouted helplessly out the window

‘Today started off with such joy. The Raleigh Christmas Parade bring smiles to so many faces. My heart was so full,’ she lamented.

Baldwin said she is ‘Praying for her, her family and our community.’

The Raleigh Christmas Parade has officially been canceled because of the incident.