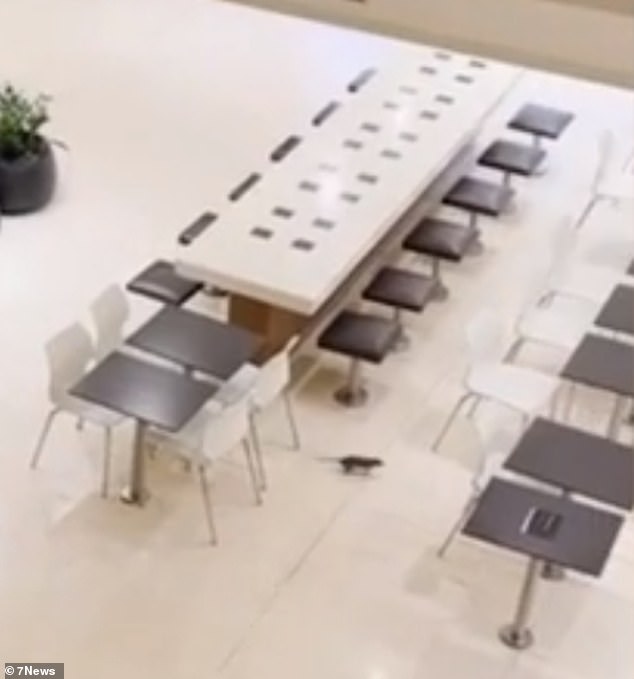 A rat the size of a small kitten has been spotted running across a food court in a major shopping centre.

The animal, named Remy after the food-loving cartoon rodent, scurried across the floor of Westfield Parramatta in western Sydney.

Video shot from the level above the food court by a shocked shopper likened the scene to 2007 Disney film Ratatouille.

Scroll down for the video.

A large rat was spotted by disgusted shoppers running through the empty food court of Parramatta Westfield, west Sydney

Several commenters were shocked by the size of the rodent and made plans to avoid running into it.

‘OK, everybody tuck your pants into your socks!,’ one person commented.

‘That thing is f**king HUUUGE,’ another wrote.

‘Remy is late for work again!,’ another commenter joked.

However not everyone was surprised by the large rat’s appearance and said it was a common sight in city shopping centres.

‘I used to work in the centre sometimes past midnight,’ one wrote.

‘There were often whole packs of rats, some which were the size of small cats or dogs. Their screeching was terrifying at night to hear.’

‘You can find them pretty much everywhere in cities,’ another said.

‘Lots of hiding places available, plenty of food, not many predators except maybe your neighbour’s cat.

‘Although I don’t think a cat could take down a rat of that size. You’ll need a terrier or a brown snake.’

‘Having seen behind the scenes at a few Westfields, this doesn’t surprise me at all,’ another commenter said.