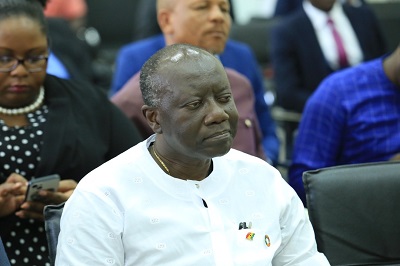 The current debt stock means Ghana has borrowed over GH¢300 billion since the Akufo-Addo-Bawumia-led government assumed power in January 2017.

Appearing before the ad-hoc committee probing the grounds of censure filed by the Minority in Parliament, Mr Ofori-Atta said despite the astronomical increase in Ghana’s debt stock, the focus should be on what the loans have been used for and its benefits to the nation.

Mr Ofori-Atta stated that the GH¢330 billion loan has been invested in One-District-One Factory, education, interchanges, Planting for Food and Jobs and other sectors that he claims have benefitted the state.

The Finance Minister also dismissed suggestions that he has mismanaged the country’s finances.

“Fiscal recklessness leading to the crash of the Ghana cedi which is currently the worst performing currency in the world” was one of seven grounds put forward by the Minority to demand the removal of Mr. Ofori-Atta.

He added that on the contrary, the government’s “strenuous efforts to protect the public purse is what has helped”.

He argued that he has as required of him always presented government revenue and expenditure propositions to Parliament, who have in turn raised no concerns.