Ghanaian journalists in Cameroon share expectations ahead of Ghana-Gabon game 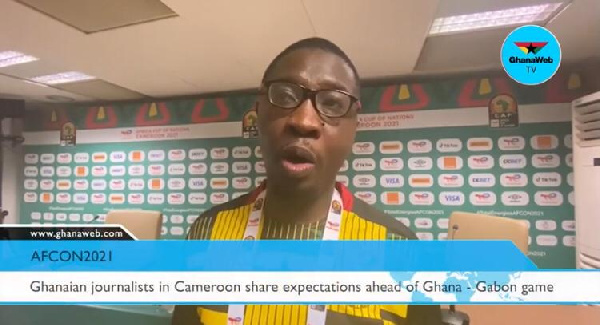 
The Black Stars of Ghana is to face the Panthers of Gabon in their second Group C fixture that could decide the faith of the former in the 2021 African Cup of Nations (AFCON) in Cameroon.

GhanaWeb’s representative Daniel Oduro has been engaging some Ghanaian journalists who are covering the tournament to gather their thoughts ahead of Ghana’s crucial game that will come up on Friday, January 14.

Wontumi FM’s Attah Poku expects a different approach unlike the Morocco game and also advised that the team make their intentions clear right from the start.

“Unfortunately, we are in a corner we have to come out fighting from minute one. So, I would want to see a change in approach to the game. We stopped the Moroccans from playing but we could not create enough chances as a team to win the game. If we are able to go after Gabon, I’m sure we will win the game, and that is what I want to see the coach change,” he said.

On his part, Citi Sports reporter, Benjamin Nketiah, suggested that Black Stars head coach, Milovan Rajevac, should be brave in his selection for the game.

“I want to see a coach that is brave enough to bench players regardless of their reputation and put in players who are ready to put in the shift. It’s within Ghana’s means to get a good result in this particular encounter,” he noted.

“If you look at history, Gabon should not be a banana peel for Ghana and you look at our current position, losing to Morocco, there is a weight of pressure on the coach and the players to deliver. Obviously, back home, people are not happy. They believe that in as much as the team lost, they did not come to the party early. So, the expectation is that they come out early and get the needed result against Gabon,” he explained.

Herbert Boakye of the Finder newspaper said, “there is a lot of positives from what coach Milovan Rajevac said, the team is ready and they do understand the task ahead. They suppose to beat Cameroon and pick up the three points.”

The match is set at 7 PM Ghana time.