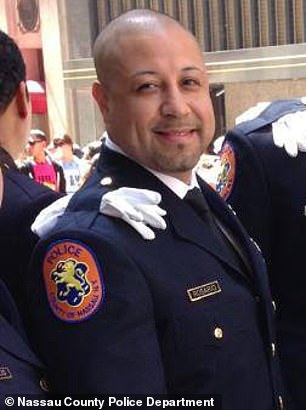 Nine men have been charged in connection with a Mafia gambling ring in New York, which prosecutors say operated out of innocuous front businesses including a gelato shop, soccer club, and shoe repair store.

In a federal indictment unsealed on Tuesday, prosecutors said that eight mobsters from the Genovese and Bonanno families operated the illegal gambling dens with the protection of a crooked cop.

The mobsters – including those with the nicknames Joe Fish, Sal the Shoemaker, and Little Anthony – were charged for racketeering.

The collaboration between the two crime families dates back at least a decade, to 2012, when they jointly opened a ‘lucrative illegal gambling operation’ out of the Gran Caffe Gelateria in Lynbrook on Long Island, the indictment claims.

Management at the gelato shop, which boasts a wide range of rotating and seasonal flavors, did not immediately respond to phone and email inquiries from DailyMail.com on Tuesday afternoon.

The crime families jointly opened a ‘lucrative illegal gambling operation’ out of the Gran Caffe Gelateria (above) in Lynbrook on Long Island, the indictment claims

Three of those charged in the gambling scheme were from the Bonanno family: caporegime Anthony ‘Little Anthony’ Pipitone, 49; soldier Vito Pipitone, 40; and associate Agostino Gabriele, 35.

Eight of the defendants were arrested on Tuesday morning, while officials say that Joseph Rutigliano remains at large.

Vito Pipitone was arrested in Wellington, Florida while the other seven were arrested in the Eastern District of New York. All were expected to make their initial appearances in court on Tuesday afternoon.

The nine defendants are charged with with racketeering, illegal gambling, money laundering conspiracy, obstruction of justice, and related offenses.

‘Today’s arrests of members from two La Cosa Nostra crime families demonstrate that the Mafia continues to pollute our communities with illegal gambling, extortion, and violence while using our financial system in service to their criminal schemes,’ said US Attorney Breon Peace in a statement.

‘Even more disturbing is the shameful conduct of a detective who betrayed his oath of office and the honest men and women of the Nassau County Police Department when he allegedly aligned himself with criminals,’ added Peace.

Families and children who visited the popular gelato shop had no idea that the back room was a gambling parlor operating video poker and poker games, as the indictment alleges

In addition to the gelato shop in Lynbrook, prosecutors say the gangsters used a web of other seemingly legitimate shops as fronts for the gambling dens.

Prosecutors say that the businesses secretly operated ‘illegal joker poker-type gambling machines’ as well as poker games, and that each of the dens could bring in more than $2,000 in illicit proceeds in a single day.

The profits earned through gambling dens were laundered through cash transfers to the defendants and through ‘kicking up’ to the crime families’ leaders, prosecutors say.

The Bonanno crime family ran the fronts at the Soccer Club, La Nazionale Soccer Club and Glendale Sports Club, according to prosecutors.

Caporegime of the Bonanno crime family, who leads a ‘crew’ of soldiers and reports to the underboss, who in turn reports to the boss. Arrested in the Eastern District of New York. Released on a $2 million bond.

Soldier in the Bonanno crime family; the lowest rank of ‘made men’. Arrested in Wellington, Florida.

Associate with the Bonanno crime family – a ranking which applies to those who are not ‘made men’. Arrested in the Eastern District of New York. Released on a $500,000 bond.

Acting caporegime with the Genovese clan. Arrested in the Eastern District of New York. Released on a $1.1 million bond.

Soldier with the Genovese family. Arrested in the Eastern District of New York. Released on a $700,000 bond.

Associate with the Genovese family. Arrested in the Eastern District of New York. Released on a $200,000 bond

Associate with the Genovese family. Arrested in the Eastern District of New York. Released on a $150,000 bond.

Associate with the Genovese family: remains at large.

Polito, an alleged acting captain in the Genovese crime family, is also charged with operating an illegal online sports gambling scheme through a website called ‘PGWLines.’

In connection with the gambling website, Polito is charged with attempting to extort an individual who lost several thousand dollars in bets he placed through the website.

In one disturbing incident, prosecutors say that Polito called a delinquent debtor in October 2019 and threatened to ‘break’ his ‘face’.

Afterwards, the indictment says that Polito instructed another individual to relay a new message to the debtor: ‘Tell him I’m going to put him under the f***ing bridge.’

‘This case is further proof that organized crime is alive and well in our communities,’ said Nassau County District Attorney Anne T. Donnelly in a statement.

‘The Mafia has brought untold violence and extortion into our neighborhoods for decades, even threatening the life of an individual as part of this case,’ said Donnelly.