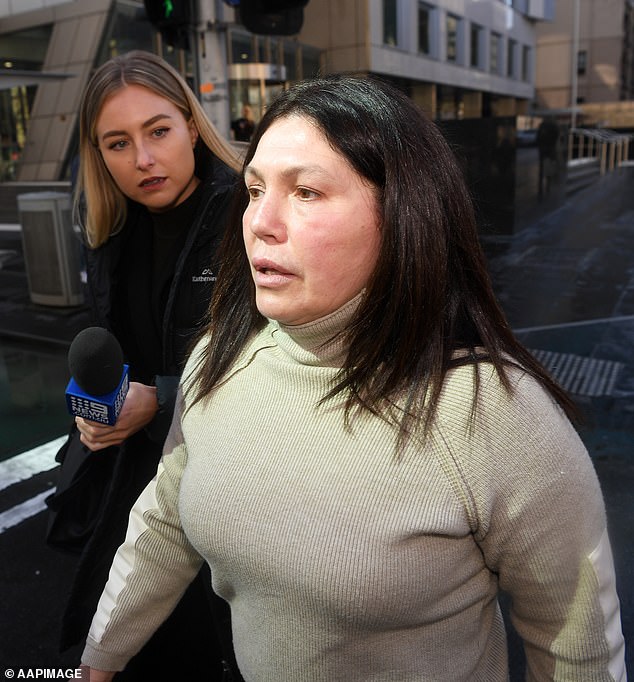 
Gangland widow Roberta Williams will spend the rest of her life on taxpayer funded welfare despite flaunting her lavish life on social media.

Williams is best known for being the jilted wife of Melbourne gangland killer Carl Williams, who had dumped her by the time he was bludgeoned to death in April 2010 by prison enforcer Matthew Johnson.

Carl had been serving 35 years for ordering the murders of three people and conspiracy to murder a fourth.

A 2007 file photo of convicted murderer Carl Williams as he sat in the dock at the Melbourne County Court. It would be the last public photo ever taken of him before his 2010 murder

On Friday, a County Court of Victoria lifted a gag order forbidding the media publishing details of her latest charges.

In July, Williams was back among familiar territory caged within the prison dock of Melbourne’s County Court.

The court heard she was broke, battered and confined to welfare payments for the rest of her life because of who she is and her unfortunate lot in life.

It was a familiar tale from the convicted drug dealer, who still manages to appear in social media posts looking a million dollars.

In 2004, while still married to Carl, Williams spent time behind bars for her role in a $450,000 drug trafficking operation.

She had pleaded guilty to one count of trafficking a commercial quantity of ecstasy and was sentenced to 18-months in jail.

Sporting bandages on both hands and appearing leaner and slightly younger than she did during her 2019 arrest, Williams again played the part of tragic victim of circumstance.

While her arrest that year made national headlines, her admissions of guilt and subsequent sentence had been kept a secret by the court to allow her co-accused to get a fair trial.

That all ended when he finally conceded his role in the doomed plot.

Williams pleaded guilty in May to charges of blackmail and recklessly causing injury to her one-time tv producer Ryan Naumenko.

Naumenko had made the mistake of contacting Williams with an idea to film a reality television series about her life.

What that show may have looked like is anyone’s guess, but if Williams is to be believed – and County Court Judge Fiona Todd took the bait hook, line and sinker – it might have featured a destitute housewife caring for her autistic child.

By the time his deal was cancelled with extreme prejudice, Naumenko had been bashed by Williams’ mates – John James Harrison, Jake Sexton, Hassam Al Zwainy and Daniel De Silva – robbed and threatened with death at gunpoint.

Ryan Naumenko, then 36, went public with the allegations against Williams in 2019. He showed off his injuries to a television reporter

Ryan Naumenko was beaten, bashed and threatened with a gun after getting into a doomed business agreement with Roberta William

Roberta Williams (centre) departs the Melbourne Magistrates’ Court after being granted bail in on August 7, 2019 over the attack on Naumenko

Naumenko, who was 36 at the time and still living with his mum, had been lured to a warehouse in Collingwood – just outside of Melbourne’s CBD – where he was ambushed.

While Williams was initially accused of choking Naumenko with an electrical cord during the attack, she pleaded guilty to the assault charge on the basis she took no part in any physical attack on him after securing a deal with the Office of Public Prosecutions director Kerri Judd, QC.

The court heard Williams told her mate to ‘kill the c*nt’ during the horrifying assault that lasted three hours.

Williams told Naumenko he was fortunate they didn’t kill his mother and children, who had been present at the very same warehouse before the attack.

The court heard Williams turned on Naumenko amid fears he was scamming her after he made promises to hand over up to $50,000 raised from a GoFundMe page to finance the ‘Mob Wives’ styled reality show.

Blackmail in Victoria carries a maximum jail sentence of 15 years, while the assault charge tops out at five.

Williams will walk this month on a community corrections order likely without having to do a single day of community work.

Even her co-accused, who faced the same charges, but had no prior offences to his name, was forced to carry out 150 hours of community work.

Williams claims she is too sick and too busy with motherly duties to perform such work.

Her fate will be officially decided on August 26, but  the presiding judge has already told her she won’t be jailed.

While Williams survived Melbourne’s infamous gangland war that claimed the lives of 36 underworld figures, the now 52-year old claims she still fears she and her family could be whacked at any moment.

Williams’ longtime barrister, Emma Turnbull, told the court her client was unable to get a job because of who she is.

Ms Turnbull said employers shunned Williams because of her public profile as a gangland widow.

Besides, even if Williams was inclined to get a day job, she was unable to because of the special needs of her youngest child Guiseppe – born to another villain in Robert Carpenter.

Carpenter is a convicted killer, who once stomped a 14-year-old boy to death under a house in Melbourne.

During her preliminary hearing in the magistrates’ court, Williams had been shown vomiting into a paper bag before launching into a rage, lifting up a police desk and smashing chairs.

Extraordinary video showing Williams berating police before trashing the interview room was released by prosecutors at the time.

For half-an-hour Williams had bombarded police with a host of conspiracy theories before she was sick in a brown paper bag.

The video was captured inside a Melbourne West police station interview room just weeks after Williams allegedly threatened to kill the television producer.

A tearful Williams was seen throughout the hour long video in a state of distress, leaning back on her chair and preaching to two fraud squad detectives.

‘Cos that’s what you do. You have people killed. You wear a badge and you can do that.’

Carl Williams was bludgeoned to death in April 2010 by prison enforcer Matthew Johnson after reading in a newspaper that his cellmate was a police informer.

He had been serving 35 years for ordering the murders of three people and conspiracy to murder a fourth.

Johnson was convicted and sentenced in December 2011 to 32 years in jail.

Carl Williams had split with his wife years earlier from behind bars.

Years before he died, with his divorce looming, the once feared gangster had appeared at court with a new woman altogether.

Williams was famously pictured shouting at Renata Laureano as she left a County Court of Victoria hearing for the gangster in 2007.

‘On the 19th of April 2010, I died that day,’ Williams told police. ‘I was told they were laughing while Carl was dying on the floor too.’

Carl Williams is pictured reading a copy of a Melbourne newspaper that revealed him to be a rat. Behind him stands Matthew Johnson, who is about to end his life

The World According To Roberta Williams

Williams was thrown onto the mean streets of Frankston as a nine-year old.

She never had her own bed and now claims to help children obtain their own bedrooms.

Williams said her daughter’s worst fear was having her mum killed while behind bars:  ‘And that kills me to hear that from my f**king daughter,’ she said.

Williams claimed Channel 7 ran the Naumenko interview (aired before Williams was charged) because they ‘hate her guts’ because she refuses to work with them.

Williams blames police for the death of Carl Williams behind bars

Believes police officers would trust her with their own children

Fears police will have her killed

Williams epeatedly accused police of trying to ‘shut her up’ before the royal commission into Victoria’s management of police informers.

Her dead husband Carl had been among the first to suspect lawyer Nicola Gobbo had been working for the police.

Williams further accused the detectives of having ‘judges in their pocket’ and conspiring to have her murdered.

‘I know I sound like a crazy woman, I know that. But you can’t deny the fact that Carl was murdered in prison can you?’ she asked.

The bewildered detectives were forced to repeatedly assure the 51-year old that not only had they not conspired to kill the gangster, they had not even been in the police force at the time.

‘All I can say in relation to that is I wasn’t a police officer when that happened,’ an officer told Williams.

She had repeatedly denied any wrong doing over the allegations put forward by the television producer.

Williams claimed she was the real victim and that she had messages – allegedly on behest of police – warning her someone was going to ‘spray her house with pellets’ and stab her when she visited Brisbane.

‘So which police officer gave those instructions?’ she said. ‘I’m not going to shut up. I’ve got all the time in the world.’

‘There is no victim. There is no fudging victim. Like you said, you wanna shut me up before the royal commission.’

‘I didn’t say that,’ the detective explained, again.

The video showed Williams repeatedly talk over the detectives as she spouted off conspiracy theories about corruption within the state.

Detectives were forced to stop the interview after just 10 minutes as Williams continued to rant.

At one point, Williams asked to see her psychiatrist before going off the handle accusing yet another police officer of murder.

‘I need my medication right now because I’m about to have a mental breakdown,’ she warned.

She then asked for a bin in case she needed to vomit.

Instead she received a bag, which she used with gusto.

When finished literally spilling her guts, Williams continued to go on the attack, declaring a detective tried to have her killed by a bikie.

Among a range of allegations, Williams accused Victoria Police of not only killing Carl, but murdering his mum and bashing in the head of her infant son.

‘My mum committed suicide, allegedly, but the police killed her too,’ she said. ‘So Vic Pol has taken three lives in my family and I’m meant to be okay?’

Barbara Williams – Carl’s mum – suicided in 2008 with an overdoes of pills.

Williams claimed police had killed her with a hot shot of heroin.

‘I wonder who is going to stick the sharp object in my throat when I hit jail,’ she said. ‘They’d wanna be given it a good go, because I won’t have my back turned like Carl was … it will be going straight in their f**king eye. I won’t be sitting like f**king Carl was.’

Williams lectured one young officer about the evils she had seen committed at the hands of police during her wretched life.

‘I’ve seen em kick doors in babies’ faces and leave em bleeding f**king on the ground,’ she said. ‘That was my 18-month old son. He was left to bleed like a f**king animal.’

Williams only appeared to calm down when the detective entertained a discussion with her about her supposed love for kids.

She told the officer her love for children was well known among Victoria Police, with officers refusing to enter their bedrooms when executing search warrants.

‘The cops even say “Roberta I’d leave my kids with you, you’re amazing”,’ she said.