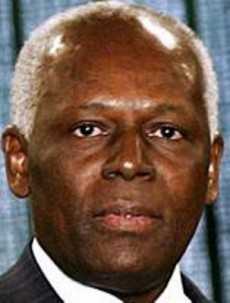 
Angola held a state funeral for ex-president José Eduardo dos Santos in the capital Luanda after his death in Spain in July.

Several African leaders and Portugal’s president were in attendance.

His death sparked a political row after his daughter, Tchizé dos Santos, opposed holding the funeral in Angola.

Mr dos Santos, a veteran of the independence war, was a dominant figure in Angolan political history having ruled the country for 38 years.

However, his legacy has been soiled by allegations of high levels of corruption and human rights violations while he was in power.

Aside from the political class and foreign leaders, Angolan citizens outside the funeral have been paying tribute to Mr Dos Santos, with some wearing t-shirts with his face on them.

“He was a great example for the people who did a lot for us,” Adilson Quaresma told the BBC.

His funeral comes just days after national elections, with the governing party, the MPLA, expected to return to power.

However, the opposition, Unita, has rejected the preliminary results from the National Electoral Commission.

Due to the presence of foreign leaders at the funeral, on what would have been Mr Dos Santos’ 80th birthday, authorities have asked local people not to protest amid tensions over the expected election result.

“The national police appeals to all citizens, civil society and organised groups that intend to organise activities on Saturday and Sunday, to contain themselves out of respect for the former head of state,” local media quoted Angolan police as saying.

Mr dos Santos wanted to be buried in Spain his family says. It is also thought he was afraid his death would be politicised because his children would not be able to travel to Angola for his funeral or to visit his grave.

A Spanish court eventually ruled that he should be repatriated to his widow in Angola.

Isabel and Tchizé dos Santos currently live in exile in Europe after the current President, João Lourenço, pursued a vigorous anti-corruption campaign, which some members of the Dos Santos family have been linked to.

Isabel dos Santos has been charged with mismanagement and embezzling public funds when she headed the state oil firm, Sonangol. She has denied the charges and says she is the victim of a political witch-hunt.

Meanwhile, Zenu dos Santos, a son of the former president who attended the funeral to the surprise of many, has been jailed for five years for fraud.

José Eduardo dos Santos died aged 79 after a cardiac arrest while undergoing medical treatment at a clinic in Barcelona, Spain.

He stepped down in 2017, bequeathing power to Mr Lourenço who was then defence minister.