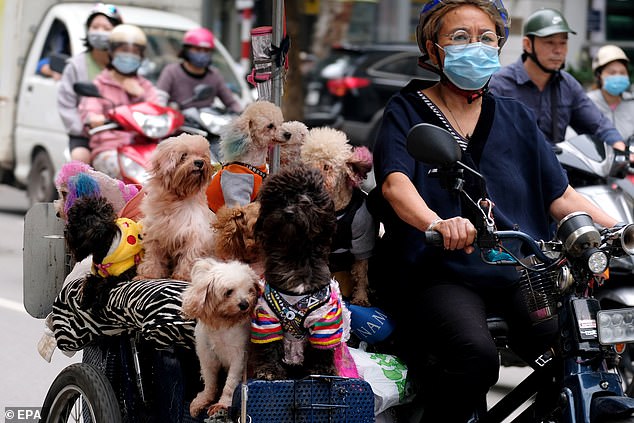 
Australians frustrated with the availability of rapid antigen tests have been forced to ship the kits from Thailand – where they cost $4.

Talkback radio and social media have been flooded with angry Australians unable to get a test, while medical experts slam government inaction on securing enough to meet demand.

‘There is an inability to supply at the critical moment and there is a lack of equity of access and it is costing so much,’ he told ABC Radio on Tuesday.

One desperate woman revealed she planned to get her hands on the tests from southeast Asia.

‘My brother is visiting my mum at the moment (she lives in Thailand) and I’ve asked that he brings back some RATs because a) they’re readily available in Thailand and b) they cost about $4 each,’ the woman wrote on Twitter.

‘The Thai government has regulated the prices of at-home testing kits so that there’s no price gouging and made millions of them available for free.’

Others blasted the rapid antigen test situation amid the emergence of the highly-infectious Omicron strain.

Another user claimed the Singapore government gave out six free rapid antigen tests to every household between August and September.

‘Another free ten kits in November to December. Now the prices of RAT cost about $4.50 each and easily available in every pharmacy and supermarkets,’ they said.

The UK Government has similarly been mailing free rapid tests people’s homes since April however this method is yet to be adopted in Australia.

The desperate measures come as reports reveal the self-test kits are costing the average Australian $100 a unit as shortages cause prices to skyrocket.

The desperate measures come as reports reveal the self-test kits are costing the average Australian $100 a unit as shortages cause prices to skyrocket (pictured, a Sydney pharmacy)

Rapid tests are free at testing centres but cost at least $10 per swab at pharmacies and supermarkets, which are low on stock due to a lack of supply (pictured, lines for tests)

Rapid tests are free at testing centres but cost at least $10 per swab at pharmacies and supermarkets, which are low on stock due to a lack of supply.

NSW and Victorian state governments have both ordered tens of millions of the devices however the tests are not due to arrive until the end of January.

‘In addition to that, we want to make sure vulnerable people – vulnerable and disadvantaged communities – have access to rapid antigen tests,’ he said.

‘We’re working through, currently, the distribution and the cohorts which we believe that those rapid antigen tests will be provided.’

‘I’m sure they can get on Zoom and run an emergency session of parliament because the thought the government is making 10 per cent off millions and millions of packets off sales of rapid antigen tests really doesn’t sit right,’ Mr Tascone said.

Mr Morrison (pictured) is keen to avoid further cost blowouts, saying on Monday he wants to ‘take that pressure off the budget after refusing to make rapid antigen tests free

The pharmacy boss said the federal government need to be doing significantly more to ensure sick Australians have easy and affordable access to rapid tests.

Mr Tascone said the demand for RATs was ‘unprecedented’ and said dropping GST on the crucial products would see immediate results.

‘They’ll be 10 per cent cheaper overnight we’ll drop the price, its not much but that $50 pack of five becomes $45 overnight,’ he said.

‘So that’s one thing they can do immediately, apparently it needs parliament sitting.’

Several medical experts called for rapid tests to be free for everyone, including University of Sydney infectious disease specialist Robert Booy who said free tests ‘could make a real difference to controlling disease’.

These calls were dismissed by the Prime Minister on Monday however, with Scott Morrison saying ‘we can’t go round and make everything free.’

The cost of subsidising rapid antigen tests will be shared 50/50 with states and territories (pictured, a man is swabbed for Covid-19 in Sydney)

‘We’re at another stage of this pandemic now where we just can’t go round and make everything free. We have to live with this virus. This isn’t a medicine, it’s a test. And so there’s a difference between those two things,’ he told Sunrise hosts on Monday.

Australia’s gross debt is expected to reach a record $1.2 trillion by 2024-25 after huge pandemic spending including $100 billion on the JobKeeper wage subsidy.

Mr Morrison is keen to avoid further cost blowouts, saying on Monday he wants to ‘take that pressure off the budget’.

The prime minister said he was working with states and territories to reduce the price for vulnerable groups with ‘concessional access to pensioners and others’.

The cost of subsidising the tests will be shared 50/50 with states and territories.

University of NSW Professor of epidemiology Mary-Louise McLaws warned in a series of tweets that rapid tests are becoming reserved for the ‘privileged and wealthy’, saying governments need to rethink their current stance.

‘To reduce cost, test hubs could use PCR on those with symptoms & rapid antigen test (RATs) on all others. Cheaper but still effective,’ Professor McLaws tweeted.

‘Without providing free RATs to households, only privileged & wealthy will be able to protect themselves & reduce wider risk of spread.’

The urgent need for rapid antigen tests comes off the back of weeks of long queues outside testing clinics in Victoria and NSW.

Holidayers who wished to hop the Queensland border for Christmas were forced to wait up to five hours due to the requirement of a negative PCR test.