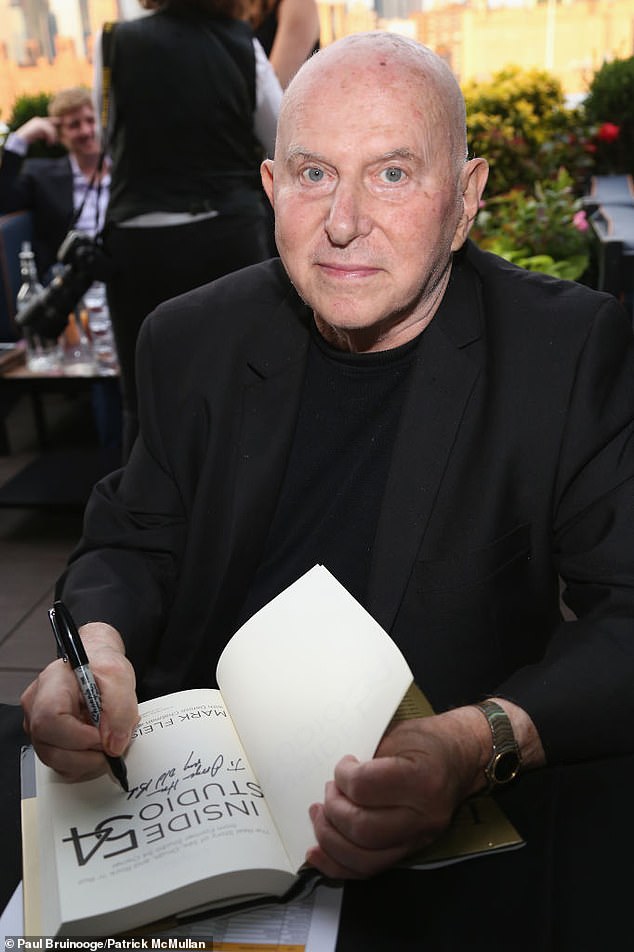 
The former owner of infamous NYC nightclub Studio 54 says he’s going to die at a Swiss suicide clinic on July 13 after a mystery illness turned him into a vegetable.

Mark Fleischman, 82, told the New York Post that he spent $15,000 booking a first class – one way – flight to Zurich, home of the famed Dignitas suicide clinic.

Once there, Fleischman will drink a lethal dose of barbiturates to end his life after two years battling an illness which doctors haven’t been able to diagnose – but which he says left him unable to move unaided.

‘I can’t walk, my speech is f**ked up and I can’t do anything for myself,’ Fleischman, said. ‘My wife helps me get into bed and I can’t dress or put on my shoes. I am taking a gentle way out. It is the easiest way out for me.’

Fleischman ran Studio 54 when it was one of the biggest clubs on the planet, known for spending time with the likes of the Rolling Stones, Robin Williams, Rick James and John Belushi.

Mark Fleischman, now 82, says he will take his own life via a lethal dosage of barbiturates with the assistance of a Swiss non-profit group called Dignitas on July 13

The former owner of Studio 54, one of the most famous and infamous clubs in the history of New York City, says he’s choosing to end his life via a legal suicide. Fleischman is pictured in New York in 1981

A bed is pictured at the Dignitas suicide clinic. Clients pay $15,000 to receive a drink – or intravenous drip – filled with poison, which kills them painlessly

Mark – seen here with wife Mimi Fleischman – says he’s doing this because he’s suffering from an undiagnosed illness for the past two years that has left him more or less ‘a vegetable.’

Raquel Welch, Steve Rubell and Mark Fleischman at Studio 54 circa 1981. Rubell was one of the original co-founders of the club, and was later killed by AIDS

During that time, he remembers ample drug use, threesomes and boozing it up with the stars as part of what they called the ‘Dawn Patrol.’

Mark, who is a stepdad to wife Mimi’s two children from a prior relationship, says he’s been ill since 2016 when he felt his left leg start to drag at his home in California.

His wife of 27 years says that it’s worse than being paralyzed.

‘It is worse than not being able to walk. Mark doesn’t have balance. He drops things and does not know where his body is in space,’ Mimi Fleischman said. ‘Doctors originally thought he had a form of Parkinson’s. But it is not that. Nobody knows what he has.’

Mark Fleischman says he’s been considering taking his own life in this manner for the past two years.

‘I came to the decision slowly,’ he said. ‘Two years ago, I decided that it wasn’t worth living. I took a lot of Xanax and ended up in the hospital.’

He said that he settled on his choice shortly after that when he read a book about the process.

‘I read in there that the easiest way is to suffocate. But I did not want the pain. I was going to buy a gun. But my wife interceded. We started looking into a place where it would be legal to find someone to do it with.’

Mimi initially tried to stop him but has chosen to let him go the way of his choosing.

‘It’s going to be horrible,’ she said. ‘He is my partner and we are devoted to each other. So it is the end of a part of me as well. I have to honor what he wants. [But] he is not giving me a choice. He wants to end his life and this is a dignified way to do it.’

Mimi was able to locate Dignitas, a group that helps people with terminal illnesses end their lives since 1998. The nonprofit had conversations and a psychological test with Fleischman before he made the call.

‘They want to be certain that I am making the decision for myself,’ he said. ‘After reading my material, they asked me some questions to make sure I was serious. I had to provide a notarized affidavit, stating that I want to die. I had to go to a psychiatrist and he confirmed that I am of sound mind. I provided all that and they said they want me over there.’

Dignitas provides the medication that will kill Fleischman before taking care of the body, cremating it and sending the ashes back to his wife for what he says is about $15,000.

They will travel to Zurich on July 8, five days before his planned death and potentially enjoy some sightseeing with Mimi, who will be at his side when he dies on the 13th.

Studio 54 – located in Manhattan’s Hell’s Kitchen neighborhood – opened in 1977 after co-founders Steve Rubbell and Ian Schrager converted a former Broadway theater into what would become the world’s first super club.

It instantly became the planet’s hottest party spot for A-list stars. Bianca Jagger famously arrived at the club atop a white horse one evening.

It was also noted for its stage display of a crescent moon snorting cocaine from a spoon, with open drug-taking and sex the order of the day.

Drew Barrymore was taken to Studio 54 aged nine years-old by her mom, and was encouraged to do drugs and dance with male celebrities while there.

In 1978, Rubbell blabbed that ‘only the Mafia’ had made more cash than the $7 million the club had turned over in the first year, catching the attention of IRS investigators.

On what many believed to be Studio 54’s final night, the pair were serenaded by Diana Ross and Liza Minelli.

Schrager was granted a presidential pardon by former President Barack Obama in January 2017, while Rubbell died of AIDS in 1989.

In 1981, the club was sold to Schrager, but had lost its cachet. An even glitzier super club, The Saint, opened in New York’s East Village the previous summer, stealing much of Studio 54’s thunder.

Meanwhile, many patrons who frequented both venues soon were beginning to succumb to an horrific mystery illness – later identified as AIDS – with those who survived often left too terrified to continue with their hedonistic lifestyles.

Studio 54 staggered on without its celebrity sheen until 1986, while The Saint closed two years later, with both venues’ clientele decimated by the terrifying new virus which at that time spelled an appallingly painful death.

Fleischman ran Studio 54 when it was one of the biggest clubs on the planet, known for spending time with the likes of the Rolling Stones, Robin Williams, Rick James and John Belushi

The golden age of disco in black and white: New York’s legendary uninhibited 70s nightlife from Studio 54 to the Fun House is captured in iconic photographs

Photos uncovered from the personal archives of a historic photographer reveal a New York brought alive at night in the uninhibited 70s, capturing the Golden Age of disco.

Setting to map out every popular dancefloor in New York, portrait photographer Bill Bernstein has unveiled a collection of images capturing the underbelly of a booming city during an era that saw soaring crime, blackouts, and a turbulent foreign war.

The collection of many of his favorite images caught on film from the club culture of New York City‘s legendary 70’s night-life with many never before seen photos.

The free exhibition will run from April 19 – 29, opening at Defected Records HQ in Shoreditch, East London, for visitors.

‘I am incredibly excited to exhibit my photographs at Defected’s offices,’ said Bernstein. ‘There’s an obvious connection between Glitterbox’s philosophy and the creative, magical and inclusive spirit of 70’s New York.’

The never-seen-before photos document a time after Stonewall and pre-AIDS, where the manifestation of sexual liberation, Women’s Liberation, Civil Rights and equality was on display in the clubs and on the dance floor throughout the night.

Watch your step: The personal collection of images is curated from the archives of Bill Bernstein. A collection of many of his favourite images caught on film from the ‘uninhibited and judgment free’ club culture of NYC’s legendary 70’s night-life with many never before seen photos

Smoky dancefloor: portrait photographer Bill Bernstein has unveiled a collection of images capturing the underbelly of a booming city during an era that saw soaring crime, blackouts, and a turbulent foreign war. NYC was experiencing problems with crime and trash collection at the time, and became known as a very challenging place to live. But at the same time it was a hotbed of creativity and culture, best expressed at NYC’s night clubs. The underground club scene was in lower Manhattan

Get low: The collection of Bernstein’s favorite images caught on film from the club culture of New York City’s legendary 70’s night-life with many never before seen photos. Disco soon became charged with political fever. A Major League Baseball promotion got out of hand in 1979 with Disco Demolition Night, when the destruction of disco CDs caused a riot in the city

The Last Dance: The exhibition will feature iconic images from clubs made famous by the era such as Studio 54, Paradise Garage, Mudd Club, Fun House, Xenon, Empire Roller Disco. A collection of the photos of of Studio 54 and Paradise Garage are currently being sold as NFTs Non-fungible tokens (NFTs) of nightlife pictures from the heyday of Studio 54 and Paradise Garage are being sold as NFTs by SuperRare Labs and Bernstein to raise money for charity. NTFs are usually restricted to the era of digital art, but Bernstein’s photos have pushed through such boundaries as the financial-artistic frontier expands. The NFT photos will be auctioned off on September 22 to collectors worldwide

A star in the making: Larry Levan, pictured, was best known for his decade-long residency at the Paradise Garage club, which has been described as the prototype of the modern dance club. Disco soon became charged with political fever. A Major League Baseball promotion got out of hand in 1979 with Disco Demolition Night, when the destruction of disco CDs caused a riot in the city

Roller skates: An icon of the 70s. President Ford at the time denied New York City a Federal bailout, with headlines running with the phrase ‘Ford to City: Drop Dead’, which Ford claims he never actually said

A transformative era: Since beginning his career at the Village Voice in the 1970s, Bernstein has been involved with researching and representing contemporary cultures and sub-cultures through his photography. ‘I was really impressed by the mixture of subcultures and marginalized cultures all mixing together on the dance floor,’ he added. ‘The open sexuality of the time and the freedom of expression on the dance floor was really something that I wanted to continue photographing’

Share. Facebook Twitter Pinterest LinkedIn Tumblr Email
Previous ArticleHow we got addicted to using Q-tips the wrong way
Next Article I Am In A Very Bad Mood – Shatta Wale Responds To His Father’s Issues