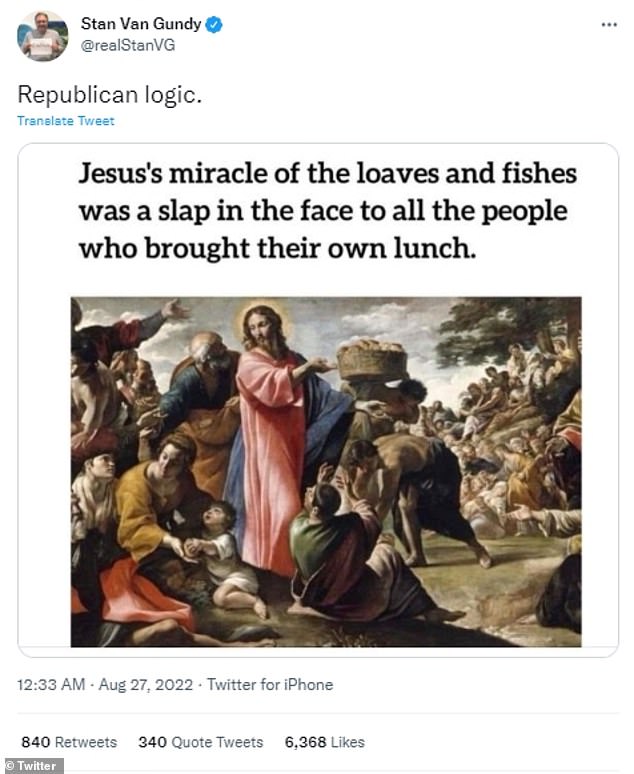 
A former NBA coach has been ridiculed for comparing President Biden’s student loan debt forgiveness to Jesus’ miracle of feeding the multitudes.

Stan Van Gundy – formerly head coach of the Orlando Magic, the Miami Heat, and the Detroit pistons – tweeted a meme intended to mock Republican mentalities but instead landed his own political logic in a hotbed of ridicule.

The meme showed a painting of Jesus’ miracle of bread a fish – a bible story where Jesus feeds thousands by miraculously multiplying a supply of bread and fish – with a caption reading ‘Jesus’s miracle of the loaves and fishes was a slap in the face to all the people who brought their own lunch.’

Van Gundy added his own caption in the tweet, saying ‘Republican logic’ apparently intending to call Republicans stubbornly uncharitable for opposing Biden’s forgiveness of $10,000 in student loan debt for individuals making up to $125,000.

Rather than serving as biting criticism, Twitter users quickly put Gundy on the blast and said his Tweet simply pointed out Democrat’s illogical view of how the world works.

Stan Van Gundy (left), formerly head coach the Orlando Magic, the Miami Heat, and the Detroit pistons, tweeted a meme intended to mock Republican mentalities but instead landed his own political logic in a hotbed of ridicule

‘Which verse describes how Jesus paid for the loaves and the fishes by taxing, among others, those who brought their own lunches?’ one user wrote, summarizing the general sentiment of responses.

‘Where did the loaves and fishes come from, Stan?’ wrote conservative commentator Noam Blum.

Conservative columnist Michael Graham tweeted in response, saying ‘When Biden can magically turn a single barista’s $50k Masters of Eng Lit college debt into $500B, then we’ll talk about Jesus.’

‘It’s more like Jesus created the miracle for free for the people who at the fish and loaves but charges the people who brought their own lunch $500 billion,’ commented another.

‘The government isn’t Jesus and the loaves and fishes weren’t confiscated from dudes down the shore,’ said a RedState.com writer, ‘The distribution also wasn’t targeted to a select few. Both other than that, great analogy.’

The former coach became an outspoken critic of conservatives on his Twitter account during Donald Trump’s presidency. He has waded into local political and pushed support for progressive candidates, while continually taking shots at conservatives and their policies.

‘It’s hard to sit back and be silent,’ Van Gundy told GQ in an interview about his Twitter politics, saying in the lead-up to the 2020 election he felt the need to address ‘racial injustice, criminal justice reform, obviously the pandemic.’

The response to Van Guny’s tweet comes as a Penn Wharton analysis said Biden’s sweeping student debt cancellation plan will cost at least $605 billion and could cost more than $1 trillion.

The budget model showed that debt cancellation components of the plan would cost between $469 billion to $519 billion over a 10-year budget window, the actual figure depending on whether new or existing students are included.

Biden announced that those making up to $125,00 would have $10,000 of their federal student loans forgiven and Pell Grant recipients would be able to get $20,000 in debt wiped away.

Penn Wharton found that about three-fourths of debt cancellation would benefit those making under $88,000 per year.

The new IDR provisions include: capping repayment at 5 percent of monthly income (instead of the current 10 percent), covering borrowers’ unpaid monthly interest so that debt balances will not grow even when income-adjusted monthly payments are zero and forgiving loan balances of $12,000 or less after 10 years of payment, instead of 20.