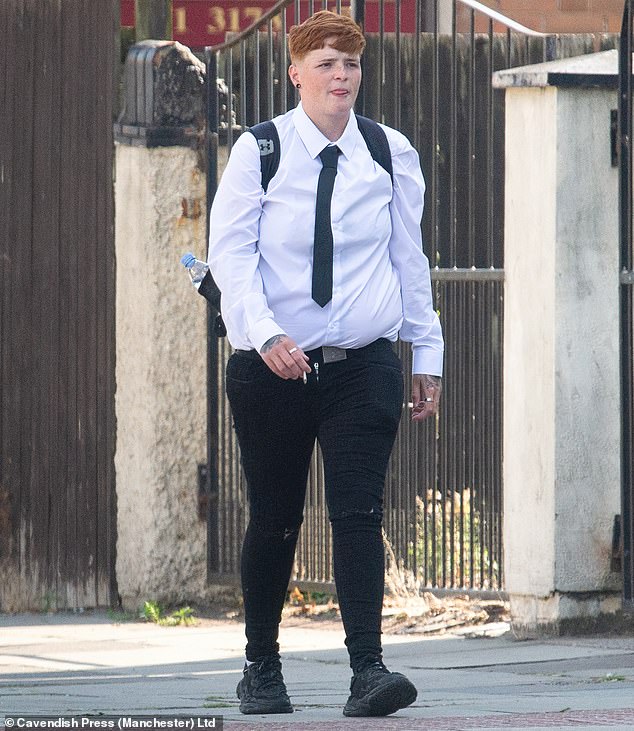 
A female football fan has become the first woman in Britain to be banned from all ‘regulated’ soccer matches after she hurled a flare onto the pitch as she watched her team being thrashed at home.

Abbie-Leigh Reay, 23, was arrested after she grabbed the missile and threw it towards the referee in a fit of rage after her team Tranmere Rovers went 3-0 down in a crunch League Two fixture against Forest Green Rovers.

As the flare landed on the pitch near referee Lee Swabey and Forest Green goalkeeper Luke McGee, CCTV footage captured Reay as she threw her arms up and started ‘dancing’ in celebration.

Police later stopped the Aldi supermarket worker as she was leaving Tranmere’s Prenton Park stadium after the team were beaten 4-0 in the top of the table clash.

Despite her arrest, Reay posted winking pictures of her at the match with her girlfriend and family along with a laughing emoji and the caption: ‘Before it all went downhill.’

One of her comments read: ‘Just hope I don’t get banned.’

Abbie-Leigh Reay, 23, has become the first woman in Britain to be banned from all ‘regulated’ soccer matches after she hurled a flare onto the pitch as she watched her team being thrashed

Reay (pictured left) jokingly posted a photo of herself (left), and her partner Libby Case (pictured middle) on Facebook after the match, with the caption: ‘Before it all went down hill’

At Sefton magistrates court in Merseyside, Reay, of Bebington near Birkenhead who was convicted of throwing a missile onto a football playing area under the Football (Offences) Act 1991 was issued with a Football Banning Order which prohibits her from attending regulated matches for three years.

The banning order could stop her watching her 14 year old brother from playing in league matches.

Sentencing District Judge Paul Healey said Reay would have to check with police first if her sibling was playing in an ‘unregulated’ match and told her: ‘I have based my decision on the findings that you did throw the flare and on the basis that it was a deliberate act to throw it on the pitch.

‘It took place at a football match which makes it more serious. I have seen the footage, you are at the front of the stand, the stadium is full. There are a lot of people in your immediate vicinity. You throw the flare on to the pitch which puts people on the pitch at risk.

‘No one is struck but there is a risk and as a result of your actions, police and stewards had to intervene. There was a large crowd which put the police and the stewards in a difficult situation.

Libby Case (left), an asthma sufferer, said at a previous hearing that she did not want to inhale the smoke caused by the lit flare which is why her partner Reay (right) threw it onto the pitch

‘They have to take action. There is a risk of it escalating further. Over many years there have been long-standing issues with disorder at football matches.’

Judge Healey added: ‘When somebody is convicted of an offence under Football Offences Act, it has to be considered whether it’s necessary to make a football banning order.

‘I have heard the comments from the prosecution, I have seen the footage and I have heard what you have said.

‘I accept that you pleaded not guilty, that you instinctively threw it on the pitch as a safety measure but that was rejected at trial.

‘I could not see any sign of a smoke trail before you threw it onto the pitch and then there was your behaviour afterwards.

‘You have no previous convictions and there is no evidence that you are associated with any other disorder at football matches but I do believe that someone who behaves in this way presents a serious risk to players, stewards and spectators.

‘An order is necessary to avoid any risk whatsoever of this happening again.’

The incident on January 29 of this year, occurred just after half time when Forest Green extended their lead and several items could be seen being thrown onto the pitch near McGee at the Kop end of the ground.

Eventually, stewards converged on the crowd to try and apprehend the missile thrower but Reay was seen bending down and then throwing the flare onto the pitch.

She then threw her arms up as if in celebration when the missile landed near to where the referee was talking to the goalkeeper. She was stopped by police when leaving the grounds and interviewed later at her home.

Prosecutor Callum Bryce said: ‘It was a flagrant and deliberate act as she appeared to be dancing after throwing the flare and that she had risked causing others significant injury.’

‘She said that someone had thrown the flare and that it had landed at her feet,’ Mr Bryce said, adding: ‘She said it was going to burn her shoes but there were discrepancies between her evidence and witnesses’ evidence.

‘However good your aim is, you could always end up hitting someone. The flare could hit someone in the eye and cause injury.’

Representing herself, Reay, a lifelong Tranmere Rovers fan and previously a season ticket holder, continued to defend her actions and insisted that she was innocent.

She said she knew she was going to get a football banning order but asked if she could still watch her 14-year brother play.

‘To be honest, I did not celebrate, I was just trying to get it away,’ she said. ‘I just did what was best for everybody around me. With thousands of people around me, what else could I do? It was smoking on the floor, I picked it up and threw it and then turned around.

‘But apparently I was celebrating when we were getting beat 4-0. As I said, I did not take it with me.’

She added: ‘I have heard about the banning orders. I know I am going to get one. My little brother plays football and I wondered if I could go and watch him. He is 14.’

The order states Reay cannot go within 250 yards of Prenton Park football stadium from four hours before kick-off and four hours after the final whistle on any match day or visit any town or city where Tranmere Rovers are playing, from the midnight before to the midnight after the match is played.

The Asantehene Otumfuo Osei Tutu II, has called on government to commit enough resources towards…