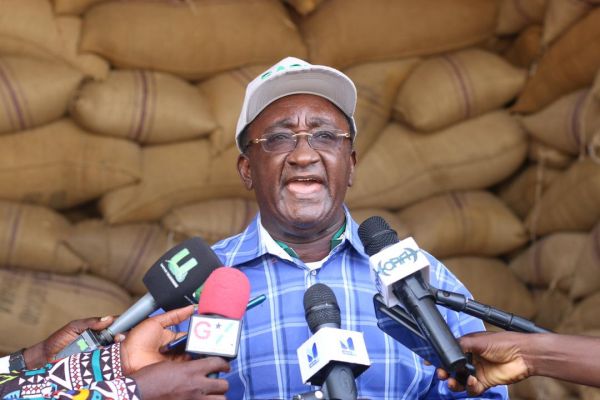 
Dr Owusu Afriyie Akoto, the Minister for Food and Agriculture has resigned according to reliable sources at the Presidency.

He tendered his resignation to President Akufo-Addo at the Jubilee House on Tuesday.

The Minister had a meeting with President Akufo-Addo where he submitted his resignation letter.

This is reportedly to enable him concentrate on his presidential ambition for the 2024 elections.

In November 2022, in the midst of economic challenges and rising food prices, Dr Afriyie Akoto implemented the controversial Planting for Food and Jobs policy at the premises of the Ministry of Food and Agriculture to sell cheaper foods to Ghanaians.

Meanwhile, the party is yet to come out with a date for the presidential primaries.

Afriyie Akoto first contested the Kwadaso constituency seat in 2004 and received 20 of the total votes cast by delegates. He lost to fellow political newcomer Josephine Hilda Addo, who won with 26 votes. Hilda Addo went on to win the constituency election in the 2004 general election. Afriyie Akoto again contested the 2007 constituency primary and beat the incumbent. He served two terms as the Member of Parliament for Kwadaso from 2009 to 2016. While at Parliament, Afriyie Akoto was the Deputy Ranking Member for the Committee on Food and Agriculture and Cocoa Affairs. He was succeeded by Samiu Kwadwo Nuamah when he lost the NPP parliamentary primary in 2015.

In January 2017, President Nana Akufo-Addo nominated Afriyie Akoto for the position of Minister of Food and Agriculture. He was approved the same month.During his vetting, he made it known that investors from South Africa and the United States who had visited the Afram plains, Kintampo, and other places in the country were excited about the animal rearing opportunities those places offer and had expressed interest in investing in the sector.

Vision for the Ministry

As the Minister of Food and Agriculture, Afriyie Akoto promised to increase the percentage of farmers who use improved seeds for farming, which as of June 2017 stood at eleven percent. He asserted the 85 percent of farmers still use traditional seeds, which reduce their yields. He has also made it known that the government will be collaborating with the Savanna Agricultural Research Institute and the Grains Development Board to overcome the deficit in the supply of seeds for the Planting for Food and Jobs programme.

In May 2017, President Akufo-Addo named Afriyie Akoto as one of 19 ministers who would form his cabinet. The names of the 19 ministers were submitted to the Parliament of Ghana and announced by the Speaker of the House, Rt. Hon. Prof. Mike Ocquaye. As a cabinet minister, Afriyie Akoto was part of the president’s inner circle and aided in key decision-making activities in the country.