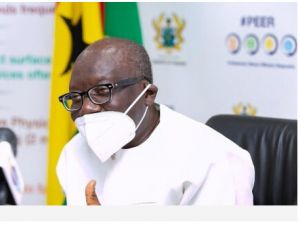 
The scheduled appointment for the Minister of Finance, Ken Ofori-Atta to appear in Parliament today to answer questions on how funds for COVID-19 were spent has been postponed.

It followed a request by the Minister for Parliament to postpone the appointment due to other engagements.

The Minister had been summoned by Parliament to account for COVID-19 funds, and was also expected to answer 16 other questions from Members of Parliament (MPs).

On Thursday, May 26, 2022, when the Chairman of the Finance Committee of Parliament, Kwaku Kwarteng moved the motion for the approval of €75 million for the COVID-19 health response project, the Speaker of Parliament, Mr Alban S.K. Bagbin said that the House would only consider the loan after the Minister of Finance had given details of how previous loans were utilised.

The Speaker said it was about the fifth time the Finance Minister had been summoned by Parliament to come and provide answers to certain questions asked on the floor of the House but has not been able to honour them.

The Speaker said Parliament would invoke its powers if the Finance Minister failed to appear before the House to give account of how the COVID-19 monies were spent.

The urgent questions that are to be answered by the Finance Minister are in the name of the National Democratic Congress ( NDC) MP for Wa East, Godfred Seidu Jasaw; the New Patriotic Party (NPP) MP for Ablekuma North, Sheila Bartels; NPP MP for Bortianor-Ngleshie-Amanfro, Sylvester Tetteh, and NDC MP for Bongo, Edward Abambire Bawa.

Mr Jasaw would want to know when the Ministry of Finance will issue financial clearance to the Ministry of Food and Agriculture to clear the debt owed partners and suppliers to ensure availability of subsidised fertiliser in the farming season, while Ms Bartels’ question is to find out from the Finance Minister the current status of funding for the construction of PhaseTwo of the Tema Motorway, which has been highlighted as a major issue for commuters.

Mr Tetteh’s question is on the interventions the Ministry of Finance is employing to clamp down on the sustained increments in fuel prices as witnessed in the recent pricing windows, while that of Mr Bawa is on what the Ministry of Finance is doing to slow down the increases of petroleum product prices at the pumps with respect to imposed taxes and levies on petroleum products and the depreciation of the cedi.