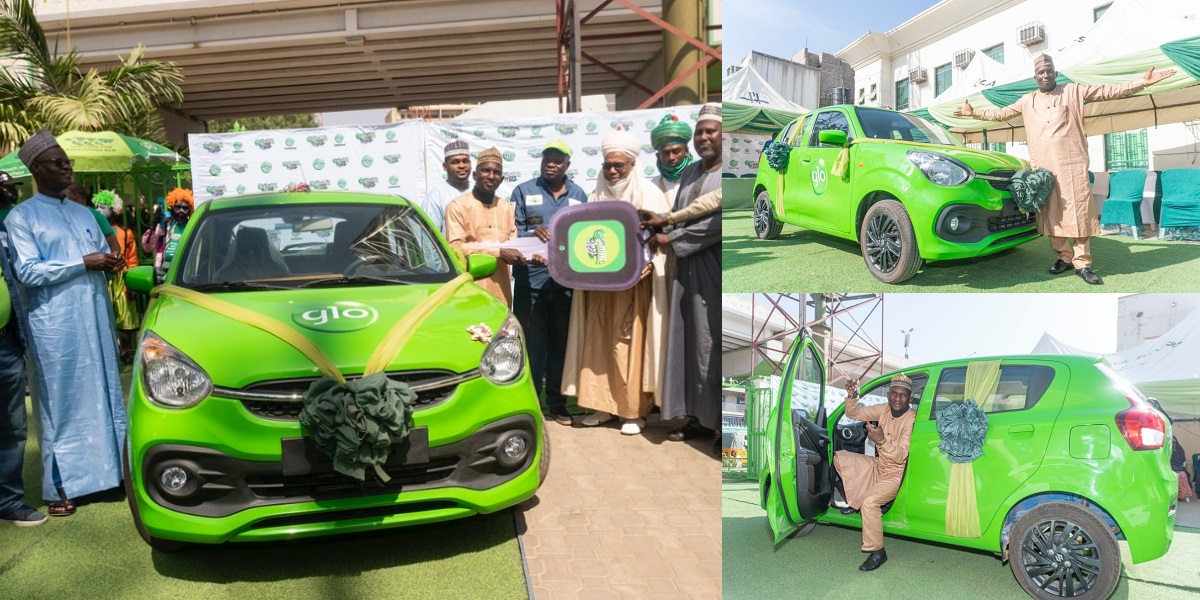 
Digital Services Company, Globacom, on Tuesday January 24 in Kano presented another brand car to a new winner in the on-going Glo promo, Festival of Joy.

The presentation ceremony was held at Gloworld, Kano, with the Emir of Kano, Alhaji Aminu Ado Bayero, who was represented by Dan Amar of Kano, Alhaji Aliu Harazimi, presenting the keys to a brand new car to Anas Yusuf Adamu, a kano-based businessman.

The Emir said, “It is worthy of note that Globacom has not forgotten to reward its loyal customers in Kano and across Nigeria. This culture of empowerment is commendable and sets a good example for corporate Nigeria”.

Speaking after receiving car keys, Anas recalled his experience when he was called by Globacom. He said, “I first got a call in the evening from the Glo office that I had won a car. I almost did not believe because my phone was switched off all day. When they however told me to come to the Gloworld office on Murtala Mohammed Way in Kano, it dawned on me it is real”.

The winner, who said that he had never owned a car, explained that the car prize that he won in Globacom’s promo is great empowerment for him and his family.

Other winners also went home with different home appliances including Sewing machines, generating sets and rechargeable fans. A total of 60 winners emerged from the draw that preceded the prize presentation ceremony.

Alhaji Adamu Fanda, Kano State commissioner for Finance, who also spoke during the event, commended Globacom for its empowerment, in which the company has given out so many valuable prizes to its subscribers nationwide including in Kano State. He said, “Globacom is setting a good example of what corporate citizenship should be. The company is indeed demonstrating its commitment to its operating environment. I encourage them to keep it up”.

The event was attended by representative of Nigerian Communications Commission (NCC), Alh Ibrahim Mahmud, Engr Hamza Goya from National Lottery Regulatory Commission (NLRC) as well as friends and family members of the winners.