Fauci say he is ‘not going to retire in the traditional sense,’ admits lockdowns were ‘draconian’ 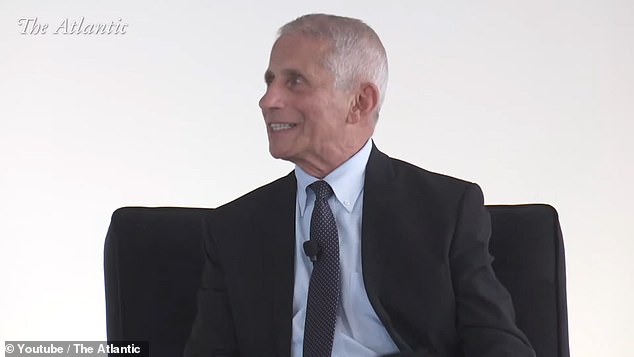 
Anthony Fauci said at a conference on Wednesday he would not be retiring in the ‘classic sense’ even as many Americans become weary of the doctor and call for him to retire permanently.

Many social media users have taken to the internet to complain about Fauci’s unwillingness to hang up his boots for good, and are calling on the 81-year-old to ‘retire in the classic sense.’

Fauci spoke at The Atlantic Festival sponsored by media outlet The Atlantic where he discussed the ‘draconian’ measures he instituted, but defended the decision as necessary because of the dire situations in the nation’s hospitals.

The nation’s ‘top doctor’ said he knew that shutting things down, even temporarily, would have a bad effect on the nation’s schoolchildren and the economy.

One Twitter user called on him to ‘just retire already,’ and contended that he knows ‘it’s no longer a pandemic!’

Many Americans took to Twitter following the discussion to voice their feelings about his comments, and some want him to step away from professional life for good

He also claimed that social media created a divisiveness that warped his statements and purposefully made his guidance sound controversial and arbitrary.

‘When you make recommendations, if the primary goal when you’re dealing with a situation where the hospitals were being overrun in New York, intensive care units were being put in hallways, you have to do something that’s rather draconian.’

He said his biggest regret was not more clearly explaining that ‘science and data change from day to day and from week to week.’

‘You have to make a balance when you’re dealing with the only way to stop something cold in its tracks is to try and shut things down,’ Fauci said.

‘You try to shut things down for the sake of it, that’s bad. but with the purpose of being able to regroup so that you can then open up in a safe way, that’s the best way to do it,’ he continued.

When asked about what comes next for the Covid czar, Fauci said he won’t retire but rather ‘rewire’ as he wants to inspire the next generation of medical professionals and perhaps write articles or lecture.

‘I’m not gonna retire in the classic sense. I’m stepping down from the federal government,’ he said.

‘I think I looked pretty spry and energetic at my age, I have a few more years to do something while I’m still energetic. I still have all my smarts and I’m still relatively healthy, he added.’

He maintained that ‘the benefit of my experience to hopefully inspire the younger generation of scientists and would-be scientists so that you might stimulate them to want to pursue a career in science and in medicine.’

He was also questioned about President Joe Biden’s controversial comments last weekend, where he asserted that the Covid pandemic was ‘over.’

‘I’m not gonna retire in the classic sense. I’m stepping down from the federal government,’ Fauci said at the conference

‘We still have a problem with COVID. We’re still doing a lotta work on it. It’s – but the pandemic is over,’ Biden said to journalist Scott Pelley

During Sunday’s episode of 60 Minutes, host Scott Pelley pointed out to the president that they were walking around the first Detroit Auto Show in three years and then asked, ‘Is the pandemic over?’

Fauci said Biden was trying to make the point that ‘it’s very different now,’ and said ‘we have vaccinations, we have boosters, we have the availability as of the last couple weeks an updated vaccine that actually matches the circulating strain.

The epidemiologist said in August he will leave government service in December to ‘pursue the next chapter’ of his career as President Joe Biden praised his work during the Covid pandemic and Republicans vowed to call him before Congress.

Biden said Fauci has saved ‘countless lives,’ which includes decades of work on infection diseases including the AIDS crisis, Ebola, Zika and the coronavirus pandemic.

‘I’ve been able to call him at any hour of the day for his advice as we’ve tackled this once-in-a-generation pandemic. His commitment to the work is unwavering, and he does it with an unparalleled spirit, energy, and scientific integrity,’ Biden said in a statement.

Fauci became a household name during Donald Trump’s presidency when he clashed with the then-president and members of the Republican Party on how to handle the covid pandemic.

Eventually sidelined by Trump’s administration, he continued to speak out, advocating for face masks and social distancing before vaccines were widely available while Republicans painted him as symbol of lockdowns.

‘Fauci’s resignation will not prevent a full-throated investigation into the origins of the pandemic. He will be asked to testify under oath regarding any discussions he participated in concerning the lab leak,’ Paul wrote on Twitter of Fauci’s resignation.

There was some suggestion that, if Republicans win control of Congress in the November election, they would start an investigation of Fauci. There was speculation he would retire to avoid that.

Republicans, however, are already vowing to call him before Congress – whether he works for the government or not.