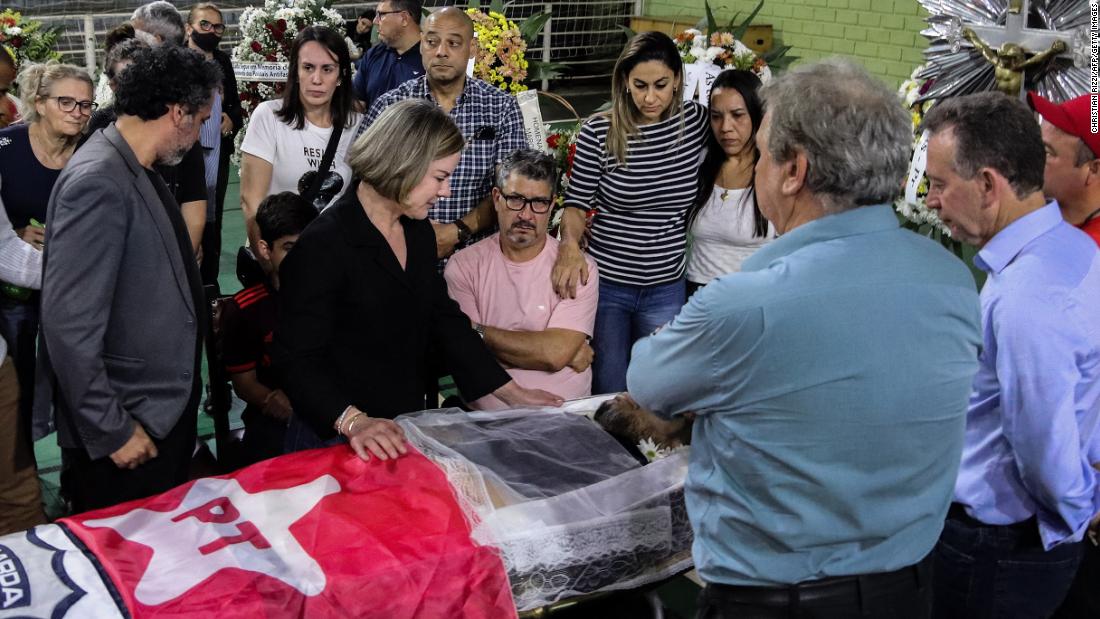 Instead, deadly gunfire erupted at the gathering in the southern Brazilian city of Foz de Iguaçu, claiming Arruda’s life in an apparent clash over politics that has drawn the nation’s attention.

Guaranho, an ardent Bolsonaro supporter, was asked to leave with his family — but returned minutes later with a gun, Arruda’s son Leonardo told CNN Brasil.

Guaranho and Arruda, a member of the local security forces, exchanged fire.

“My father said ‘Man, get out of my party. I’m a cop, get out. Let me enjoy my party in peace.’ And the guy pointed at him and pulled out a gun and pointed it at him,” Leonardo said.

“The man returned a few minutes later and started shooting. He shot my dad three times and my dad was able to shoot back and shot him five times,” he said.

Arruda, who was hit twice, has died from his injuries, according to Parana state civil police.

Guaranho was also shot and is currently hospitalized in critical condition, police said.

It wasn’t the first violent episode associated with the country’s increasing political polarization.

Just one day before the shooting, two explosives were thrown into a crowd at a rally for Lula, as da Silva is popularly known.

At another rally, Lula was also heard thanking a local councilman who was arrested for attempted murder against a man who insulted the former president in 2018.

In a statement on their official website Sunday, the Workers’ Party described Arruda as a “victim of intolerance, hatred and political violence,” and accusing President Bolsonaro of “hate speech” that encourages followers to act rashly. The party is planning to request a federal investigation into the incident, press officer Ricardo Amaral told CNN on Monday.

Lula also tweeted Sunday that the killing had been motivated by the “hate speech” promoted by an “irresponsible president.”

“We dismiss any kind of support from those who practice violence against opponents,” Bolsonaro also tweeted, retweeting a message he sent in 2018, without referring to the incident directly. His statement also accused the “left” of an “undeniable history of violent episodes”.

Bolsonaro has called for a thorough investigation of the shootings. While speaking to his supporters on Monday, he also dismissed the incident as “a fight between two people,” lamenting that Garanho has been widely described as one of his supporters, or a “Bolsonarista.”

“You saw what happened yesterday [on Saturday], didn’t you? A fight between two people, there in Foz do Iguaçu. ‘Bolsonarista’ what have you. Now, no one says that Adelio is affiliated to PSOL, do they?” he said, referencing a 2018 attack when he was stabbed by a man affiliated with left-wing parties during a campaign rally.

Bolsonaro has long been accused of inciting hostility against the Workers’ Party. During a campaign rally in Acre state in 2018, the then-presidential candidate infamously lifted a tripod and pretended it was a gun, saying: “Let’s machine gun Acre´s Workers’ Party supporters.”

Top Brazilian elections official Luiz Edson Fachin has previously warned that the coming vote run a risk of unrest “more severe” than the January 6, 2021, insurrection, when American rioters violently stormed the US capitol fueled by the false belief that the 2020 election had been stolen.

“Brazilian society will put a mirror in front of itself on October 2. If it wants a war of everyone against everyone, or if it wants democracy,” said Fachin.