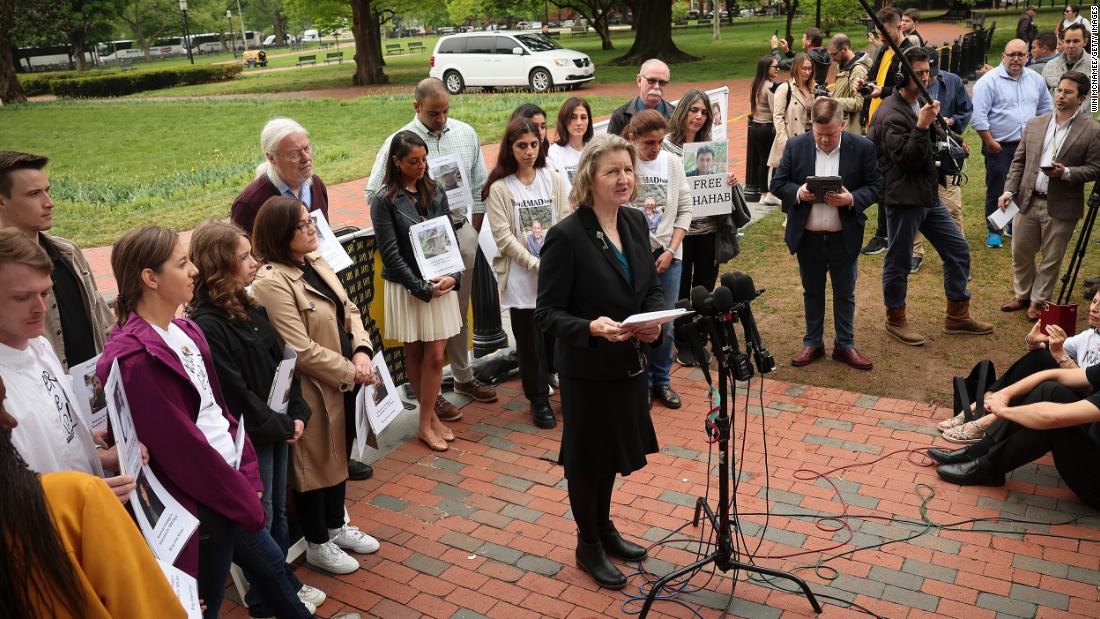 Share
Facebook Twitter LinkedIn Pinterest Email
This mounting anger and distress was underscored this week by the attempted suicide of Matthew Heath, a Marine veteran who has been imprisoned in Venezuela for nearly two years, as well as a “logistical error” that left detained WNBA star Brittney Griner unable to call her wife, with whom she hasn’t spoken in more than 100 days, on their anniversary.

A number of family members of US hostages and detainees had initially expressed a great deal of optimism and hope when the Biden administration took office in January 2021, particularly in light of a virtual meeting held by Secretary of State Antony Blinken with the family members in early February 2021. A senior State Department official said Blinken will meet virtually again with families on Wednesday.

Neda Sharghi, whose brother Emad Shargi has been detained in Iran since 2018, told CNN Tuesday that they “walked away very hopeful that there was going to be an urgency on this issue.”

But more than a year after that initial Blinken meeting, the vast majority of their loved ones still aren’t home, and following the release of Trevor Reed from Russia after his parents met with Biden, there is a sense among families that actual progress requires direct contact with the President.

On Monday, Griner’s agent Lindsay Kagawa Colas also called on Biden to meet with the detained basketball star’s family, writing on Twitter Monday, “If #BrittneyGriner is a priority, @POTUS will meet with Brittney’s family and this Administration will do what is necessary to get her home swiftly and safely.”

That same day, a group of family members of detainees and hostages around the world calling themselves the Bring Our Families Home Campaign sent a letter to Biden, formally asking that he meet with the campaign’s leadership team, “composed of five family members, to share our perspectives, ask that you meet with the families by country, and provide you information that we believe will move all of our cases forward.”

“It has become clear to us that without your direct involvement, other issues will continue to overshadow the release of our innocent family members. Nothing should be more critical to our nation than bringing home over 59 Americans from the grasps of foreign countries holding them just for being American,” they wrote in the letter, which was sent nearly two months after they gathered near the White House in May with the hope of getting a meeting with Biden.

‘We don’t know what else to do’

Sharghi, who sits on the leadership team for the campaign, told CNN they chose to send the letter now “because families feel like there is a lack of urgency and we don’t know what else to do, how else to be heard.”

“You are the only one who can ensure their freedom is restored by providing a direct mandate to your Administration to find solutions promptly,” they wrote in the letter, noting that Biden is “a man of faith and compassion who understands the importance of family.”

In their letter, the families noted they “have put (their) lives on pause for years to solely focus on saving our loved ones.”

“We wake up every day knowing that they are suffering far more than we could imagine, so much so that many of them dread waking up at all. And, for them and our families, we get out of bed and do it all again, day after day. We are doing everything we can as regular people, but we are certain that you are the one person that could make this trauma end,” the families said.

Another member of the leadership team, Alexandra Forseth, whose father and uncle are detained in Venezuela, told CNN they’ve been working on the letter for the past month. She said the White House acknowledged receipt of the letter but has not responded to the meeting request.

“Bringing our loved ones home is urgent and this Administration doesn’t seem to get that,” she said. “How many of our loved ones need to be close to death or die for them to care to deliver results instead of platitudes of these cases being a ‘top priority’?”

A White House official told CNN that they “have no higher priority than the safety and security of US citizens overseas.”

“We can only imagine how challenging this time is for the families of those held hostage and who are wrongfully detained and pain they are feeling. We remain in regular contact with them,” the official said. “We are grateful for their partnership and feedback. And we continue to work to ensure we are communicating and sharing information in a way useful to our families.”

The family of Heath, who is in stable condition in a military hospital in Venezuela following a suicide attempt, blasted the White House for not doing enough to secure his release.

“I find myself wondering how I will explain to his 13-year-old-son that his father isn’t coming home because the White House didn’t think saving him was important enough,” his aunt, Trudy Rutherford, said in a statement Monday. His uncle Everett Rutherford, another member of the Bring Our Families Home Campaign leadership team, told CNN’s “New Day” Tuesday that the family does not believe Heath is “out of the woods,” and that they expect he will attempt to take his own life again.

There have been calls, especially in the wake of Reed’s release from Russia in a prisoner swap, for the administration to consider trades if that is what is necessary to bring Americans home. In their letter, the families of the Bring Our Families Home Campaign noted that they “are not indifferent to the moral and ethical questions posed by using trades and other tools, but we know you will understand that the value of bringing home an innocent American unjustly held abroad far outweighs anything else.”

Although the bipartisan support for the swap that secured Reed’s freedom was well-received by the White House, prisoner exchanges remain rare and controversial, and ultimately require a decision by the President. One of the main challenges is that the US government does not see an equivalence between those tried in the US legal system and the US citizens they consider wrongfully detained abroad.

Another argument against the use of prisoner exchanges is the concern that it could incentivize other countries to detain Americans to use them as bargaining chips. Mickey Bergman, the vice president and executive director of the Richardson Center, which works on behalf of the families of those detained abroad, called this argument “intellectually lazy and morally bankrupt.” And Reed is urging the administration to consider more prisoner swaps if it means that more Americans are freed.