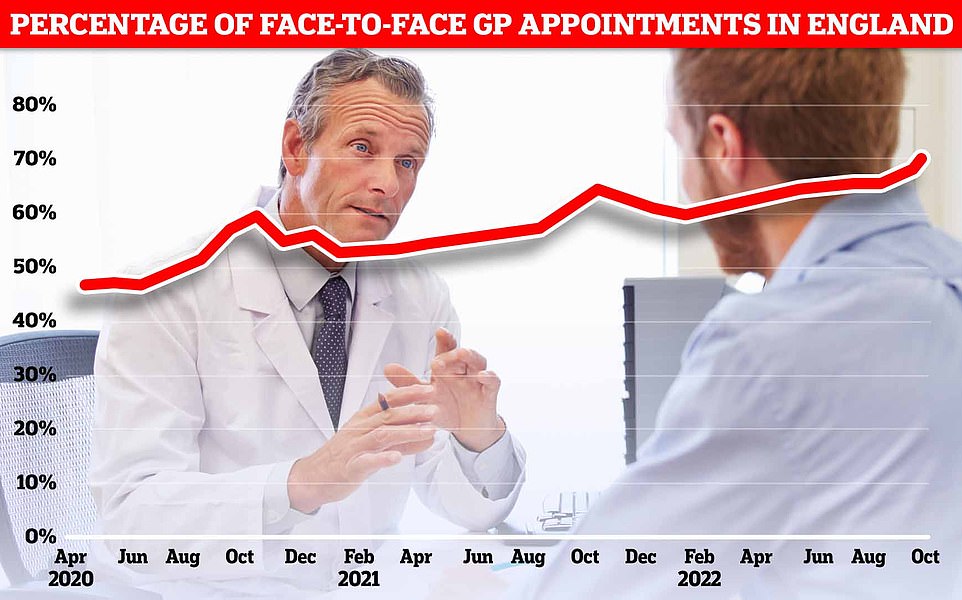 
The proportion of patients seen in-person in general practice has bounced back to its highest level since Covid first hit British shores.

NHS Digital data shows that seven in 10 consultations in England were face-to-face in October — the highest level since March 2020, when the UK was plunged into its first national lockdown.

The rate dropped as low as four in 10 during the early days of the pandemic, as Britons were told to stay at home to limit the spread of the virus.

Despite 80 per cent of patients being seen in-person pre-Covid, top doctors have suggested the figure may never return to this level.

The jump comes as the health service today published figures for every GP practice in England — naming and shaming surgeries that are still conducting most appointments by phone or video calls.

The data reveals that just 12 per cent of appointments are face-to-face at the worst-performing practices. And fewer than half of consultations were in-person at a tenth of surgeries.

Meanwhile, no patients saw a GP at one GP practice — with appointments with nurses and other practice staff offered instead.

Some surgeries provided no same-day appointments for poorly patients, while one in five patients across England waited more than two weeks — a record high.

Ministers said the data will help patients ‘make a more informed choice’ about the surgery they register with. But doctors’ unions said the data is ‘no more than a way to “name and shame” practices when the morale of dedicated staff is at rock bottom’.

MailOnline’s interactive tool allows you to find out how your GP practice fares.

However, NHS Digital data also reveals that just 44 per cent appointments in October were with a GP — the lowest proportion since the pandemic began. The majority of appointments were with other practice staff, such as a nurse, health visitor or physiotherapist

NHS’s ‘toughest ever winter’: Flu is already piling 10 TIMES more pressure on ailing service than last year with hospitals busier than ever and ambulances ‘in meltdown’

A winter of reckoning has come for the NHS with flu admissions already 10 times higher than last year, with hospital beds and ambulance delays also sky high in officials are saying could be the health service’s ‘most challenging’ season ever.

This is more than 10 times the level seen at the start of December in 2021, when an average of 31 patients needed care for flu each day.

Last year’s flu admissions, which were predicted to be high after the Covid lockdowns blunted Briton’s immunity to the virus, only peaked at about 140 patients in hospital last winter.

The health service today released the first of seasonal situation reports for 2022, earlier than previous years, amid predictions this could be the toughest winter the NHS has ever faced.

Ambulance handovers also continue to suffer with one in 10 patients arriving at hospital stuck outside waiting to be handed over for over one hour as staff struggle to find room.

Data in the NHS report shows that general and acute beds are already approaching 100 per cent occupancy, with 19 out of 20 filled by a patient.

This means there is little capacity in hospitals for a potential surge in admissions.

Bed-blocking continues to exacerbate the problem and at an even worse level than previous years.

Across England, there were 31.9million appointments in general practice in October — 13 per cent more than last month.

And more patients were seen face-to-face since Covid first hit the UK (71.3 per cent). Prior to spring 2020, eight in 10 GP consultations took place in-person. But the figure quickly slumped when the virus hit.

The figure remained below six in 10 until August 2021 and hit seven in 10 for the first time last month.

Officials had told doctors to see more patients in-person to boost access, reduce the risk of missed diagnoses and tackle disparities across the country — with some areas continuing to deliver a much higher rate of virtual appointments than others.

Former Health Secretary Sajid Javid last October said he was ‘determined to ensure patients can see their GP in the way they want, no matter where they live’. He told the NHS to publish practice-level GP appointment data to ‘enhance transparency and accountability’ — as the data was only published nationally.

The figure is only slightly higher and the next-worst offenders Bath Road Surgery in Hounslow, west London (12.6 per cent) and Sel Special Allocation Practice in Bromley.

And fewer than half of appointments at one in 10 practices in England are in-person.

Meanwhile, national data shows that just 44 per cent appointments in October were with a GP — the lowest proportion since records began in 2018. The majority of appointments were with other practice staff, such as a nurse, health visitor or physiotherapist.

None of the nearly 2,500 appointments at Addingham Surgery in Ilkley, north west Yorkshire, were with a GP — the lowest rate in the country.

The figure was not much better at Raj Medical Centre in Grimsby, North East Lincolnshire (0.5 per cent) and Ashville Surgery in Manchester (1 per cent).

Some appointments do not need to be with a GP, with other highly-trained practice staff often able to diagnose conditions and prescribe medication.

However, only GPs can sign sick certificates and treat ill pregnant women and children aged under two.

Meanwhile, ill Britons faced the longest waits for appointments in at least two-and-a-half years, with just four in 10 (38.9 per cent) seen the same day the called up their local practice. One in five (19.6 per cent) were forced to wait more than two weeks — another high.

The data also shows that 1.8million appointments across England (5.6 per cent) were missed last month — the highest rate ever.

Health and Social Care Secretary Steve Barclay said: ‘We promised to prioritise patients and improve access and that is exactly what we have done – and this is just the start.

‘I am determined to make it easier for people to get an appointment with their GP practice when they need one and this will allow patients to make a more informed choice about the care they receive.’

Minister of State for Health Neil O’Brien said: ‘This is about making sure patients can make genuine choices about where to access their care.

‘More than 90 per cent of a patient’s direct experience of the NHS is through primary care and their GP practices so it is vital appointments are available when needed.

‘This government reiterated its commitment to the NHS during the Autumn Statement and improving access to data is just the start.’

Dr Kieran Sharrock, deputy chair of the General Practitioners Committee England at the British Medical Association, said face-to-face appointments are rising but GPs are continuing to offer remote consultations ‘to make sure patients can still get the care they need, in a way that suits them’.

‘Month on month, GPs and their teams are doing all they can to safely spread the workload, with many offering appointments with other staff, like practice-based paramedics or nurses,’ he said.

It is impossible to explain the discrepancies in GP performance across England but patient choice, along with the size and age of the population each practice are some factors, he said. With more than 6,000 practices in England, there will ‘obviously be some differences in the way they operate and how staff provide care for their local communities’, Dr Sharrock said.

He added: ‘None of these nuances are taken into account in today’s data and rather than this being a useful tool to aid patient choice, it is really no more than a way to “name and shame” practices when the morale of dedicated staff is at rock bottom.

‘Ultimately, such data should be used to support, not punish practices.

‘If the Government was serious about improving access to general practice it would address the huge shortfall in doctors, rather than simply piling more pressure and expectation on to the ones that we already have and so desperately need to hang on to.’