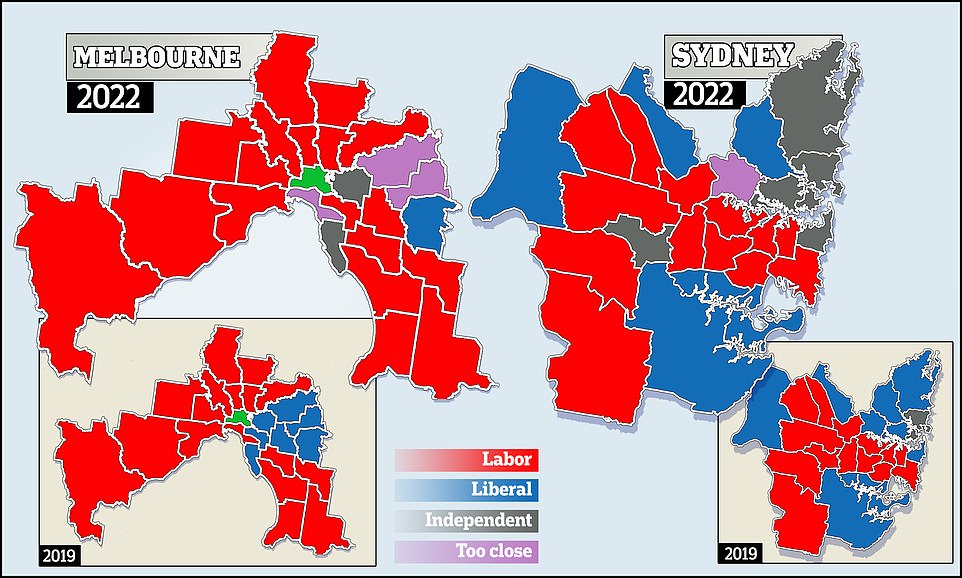 
Australia’s most expensive suburbs now vote Labor or for ‘teal’ independents – with the Liberal Party holding not one of these ultra elite postcodes in an unthinkable development.

In a major realignment of Australian politics, Labor is increasingly becoming the party of well-off electorates near city centres and with saltwater views.

Meanwhile, the Liberal Party represents outer suburbs in the mortgage belt including Penrith in western Sydney and Caboolture north of Brisbane.

After Saturday night, a federal Labor MP will be now be representing the ritzy suburb of Toorak in Melbourne for the first time while Prime Minister Anthony Albanese‘s own constituents include residents who live on Sydney Harbour.

Wealthier voters more concerned about climate change than the cost of living have redrawn the electoral map.

Australia’s most expensive suburbs now vote either Labor or for a ‘teal’ independent – with the Liberal Party holding none of these elite postcodes in an unthinkable development. In a stunning development, the Liberal Party now holds no Sydney beachside electorates north of Botany Bay or urban seats west of Melbourne’s Dandenong Creek after ‘teal’ independent won their wealthy blue ribbon seats in Australia’s most expensive postcodes

In a major realignment of Australian politics, Labor is increasingly becoming the party of well-off electorates near the city centre (pictured is Prime Minister Anthony Albanese with his girlfriend Jodie Haydon and his son Nathan0o

Their electorates could not be more starkly different, with the new PM’s Grayndler electorate covering Balmain East on Sydney Harbour, where the median house price is $3.546million.

The man expected to be Opposition Leader, Peter Dutton, kept the seat of Dickson taking in Kallangur, where the mid-point house price is $623,576.

Toorak, a very wealthy suburb 7km east of Melbourne’s central business district, is now in a Labor electorate even though it has a median house price of $5million – one of Australia’s dearest.

The ALP, for the first time ever, has won its seat of Higgins, with Michelle Ananda-Rajah beating incumbent Katie Allen, a former paediatrician, 53 per cent to 47 per cent after preferences.

Until Saturday, this electorate was Liberal Party heartland as the base of former treasurer Peter Costello and former prime ministers Harold Holt and John Gorton.

It is the home of Australia’s business elite and the ultra rich, with Toorak home to 23 individuals on The Australian’s list of the 250 richest people, which means it has more multimillionaires or billionaires than any other suburb in the country.

Toorak, a very wealthy suburb 7km east of Melbourne’s central business district, is now in a Labor electorate even though it has a median house price of $5million – one of Australia’s dearest.

A $31.25million mansion on Grange Road was last year Australia’s 10th most expensive house sold but the residents there will now have as their MP a candidate from the party of trade unions.

The Liberal Party also no longer holds the electorate of Wentworth in Sydney’s eastern suburbs, once held by former prime minister Malcolm Turnbull, following the defeat of Dave Sharma.

The daughter of former Liberal MP John Spender will also have as her constituents residents of three harbourside mansions at Point Piper, worth $40million, $38.5million and $38million.

That means Australia’s most expensive house sold in 2021 – a $40.5million mansion at Coppin Grove in Hawthorn – will no longer be in a federal Liberal electorate.

The Liberal Party’s Jason Falinkski also lost the neighbouring seat of Mackellar, stretching from Dee Why to Palm Beach, where the median house price is $4.8million.

The suburb where Home And Away is filmed will have independent Sophie Scamps, a doctor, as their local member.

Another celebrity hotspot with a lighthouse – Byron Bay where the median house price is $2.8million – falls within the NSW far north coast Labor-held seat of Richmond, where the Greens outpolled The Nationals.

Labor’s gains at this election were wealthy seats held by the Liberal Party – on either side of the Parramatta River in Sydney.

The ALP won back the seat of Reid, taking in Drummoyne where the median house price is $3.2million, with Labor’s Sally Sitou securing an 8.6 per cent swing to defeat former child psychologist Fiona Martin.

Across the water, it won back Bennelong, with Labor candidate Jeremy Laxale, the former Ryde mayor, ahead in former Liberal prime minister John Howard’s old seat after getting a 7.9 per cent swing in his favour.

The electorate includes Putney, where the median house price is $3.4million and the nearby waterfront suburb of Gladesville, with Labor winning the booth in an area with a mid-point price of $3million.

Labor has won Boothby, covering beachside Glenelg in Adelaide, for the first time since 1946 along with the Perth seats of Swan, Tangney, Pearce and Hasluck, and the Melbourne east seat of Chisholm.

The outer suburban seats are increasingly become the terrain of the Liberal Party with the Coalition keeping Lindsay, centred around Penrith (pictured) where the median house price is $908,861

Coogee, in Sydney’s south-east where the median house price is $4.083million, falls within the safe Labor seat of Kingsford Smith.

Her electorate also includes a $60million apartment on Castlereagh Street in the city.

The outer suburban seats are increasingly become the terrain of the Liberal Party with the Coalition keeping Lindsay, centred around Penrith where the median house price is $908,861.

The Liberal Party also retained the seat of Longman north of Brisbane, taking in Caboolture where the median house price is $577,934.

It also kept the seat of Bass, covering Newnham in outer Launceston where the median house price is $465,770.

The wealthy electorate includes Peppermint Grove, an elite Swan River postcode with a median price of $2.8million, which is home to billionaires Andrew Forrest, Kerry Stokes and Gina Rinehart.

The Liberal Party no longer holds a single seat of a former Liberal prime minister in a capital city, with the exception of Scott Morrison

Labor has picked up Higgins for the first time ever, with the electorate once held by former treasurer Peter Costello and former Liberal prime ministers Harold Holt and John Gorton

Labor is ahead in Bennelong where former Ryde mayor Jeremy Laxale was the candidate, regaining the electorate former ABC journalist Maxine McKew lost to tennis champion John Alexander in 2010

Labor has regained the Sydney inner west seat of Reid, which includes the abolished seat of Lowe with Sally Sitou the next member in a rich area along the Parramatta River side of Sydney Harbour

Only Wannon, in western Victoria, remains with the Liberal Party

Labor lost the south-west Sydney seat of Fowler to local independent Dai Le, the Deputy Mayor of Fairfield, after suffering a 19 per cent swing against its parachuted in candidate Kristina Keneally, a senator from the wealthy Northern Beaches.

But it still comfortably retained the outer western and south-western Sydney seats of Chifley, covering Mount Druitt, along with Greenway covering Blacktown, Macarthur taking in Campbelltown and McMahon which includes Fairfield.

The Liberal Party had double-digit swings against it on Sydney’s leafy Upper North Shore, but kept the once safe seat of Bradfield and still represents voters on the Gold Coast.

Peter Dutton kept his seat of Dickson in Brisbane’s outer north which includes the suburb of Kallangur which has a median house price of $623,576

Federal electorates in Sydney, Melbourne, Brisbane and Byron Bay that overlap with Greens state seats are now in danger of falling to the minor hard left party if the local member doesn’t have a strong personal following.

Max Chandler-Mather has a 59.1 per cent margin over the Liberal Party’s Olivia Roberts’s 40.9 per cent, Australian Electoral Commission returns show.

The Greens were in with a chance in the Brisbane inner-west seat of Ryan, with Liberal incumbent Julian Simmonds o on Tuesday leading by just 50.7 per cent to the minor party’s Elizabeth Watson-Brown on 42.1 per cent but his lead has since widened.

Ryan, only ever won by the Liberal Party at a general election since its creation in 1949, overlaps with the Greens state seat of Maiwar – the new name for Indooroopilly which had previously been a Liberal seat.

Labor is in danger in the Melbourne seat of Macnamara, covering St Kilda, with incumbent Josh Burns on 32.3 per cent of the primary vote, only marginally ahead of the Greens candidate Steph Hogkins-May on 30 per cent, which means Liberal Party preferences will decide the winner.

Labor for the first time ever picked up the seat of Higgins, in Melbourne’s inner east, from the Liberal Party.

But the electorate of former treasurer Peter Costello and former Liberal prime ministers Harold Holt and John Gorton overlaps with the state Greens seat of Prahran.

Greens leader Adam Bandt has held the seat of Melbourne since 2010 and it is the electorate of former Labor leader Arthur Calwell and finance minister Lindsay Tanner.

It overlaps with the state seat of Melbourne held by deputy leader Ellen Sandell.

Max Chandler-Mather has a 57.9 per cent margin over the Liberal Party’s Olivia Roberts’s 42.1 per cent, Australian Electoral Commission returns show

Prime Minister Anthony Albanese and former Labor deputy leader Tanya Plibersek, the Member for Sydney, hold electorates that overlap with the Greens state seats of Newtown and Balmain but they held their seats comfortably.

Labor also holds the seat of Richmond, covering Byron Bay in the far north of New South Wales, which overlaps with the state Greens seat of Ballina.

Sitting member Justine Elliot is on 28.7 per cent of the primary vote, after suffering a 3 per cent swing against her, while Greens candidate Mandy Nolan is second on 25.1 per cent, ahead of The Nationals candidate Kimberly Hone on 24.2 per cent.

Three generations of the Anthony family – Hubert, former deputy PM Doug and Larry – had held the seat for the Country and National parties.